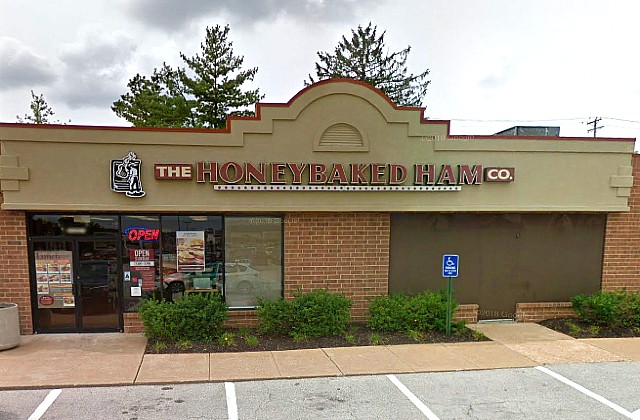 Forgetting to bring dessert to Thanksgiving dinner is pretty bad. Breaking into a store to grab pies and leaving some cash on the counter is worse, though.

That's the scene that the Ballwin Police Department reported on Facebook in its weekly round-up of recent crimes. Apparently, a door at the Honey Baked Ham store was left unlocked by mistake, Ballwin police Officer Scott Stephens tells the Riverfront Times, so this wasn't a case of breaking and entering.

"Officers discovered an open door to the business of Honey Baked Ham," the Facebook post reads. "A search of the building led to the discovery of a sum of money and a note of attempted justification. Apparently somebody was in 'desperate need' for pies on Thanksgiving, and completed an after-hours transaction, exchanging cash for pies."

But what sort of note does a person or persons leave in this scenario for the good people at the Honey Baked Ham Co.? Well, the Ballwin PD posted a photo of the note and the and cash here.

"Happy Thanksgiving!" the note begins. "No one was here, and we were in desperate need of pies. Left money, took pies. Thanks!"

Officer Stephens says the incident could have potentially amounted to trespassing charges, as the business was closed at the time, but Honey Baked Ham declined to press charges.

"It's one of those interesting types of issues because the building was left unlocked," Stephens says. "There's an issue between the letter of the law and the spirit of the law. The letter of the law, you'd look at some issues with trespassing because they were not open for business, and taking items and leaving money isn't exactly how things are supposed to happen. That could become an issue, but in this case, the Honey Baked Ham people didn't have a desire to prosecute anyone. It ended up being a silly mistake."

It turns out that the mysterious culprit also left plenty of money for the pies. Stephens says that the cash left on the counter "more than covered" the product that were taken as well as the sales tax. Still, Stephens says he doesn't recommend this solution to others when facing a dessert emergency.

"It ends up being relatively humorous in this case but it's not a practice we'd like to see," Stephens says. "Just like we preach to people all the time to lock their car doors and homes, that extends to businesses as well."

When reached by phone yesterday, a manager at the Honey Baked Ham store in Ballwin said he couldn't comment on the incident but referred us to contact Jo Ann Herold, chief marketing officer for the Georgia-based company. We have reached out to Herold for comment and will update this post if we hear back.

As for the delinquent who took the desserts, his or her identity remains unknown — and that's something for he or she should be very thankful for this holiday season.