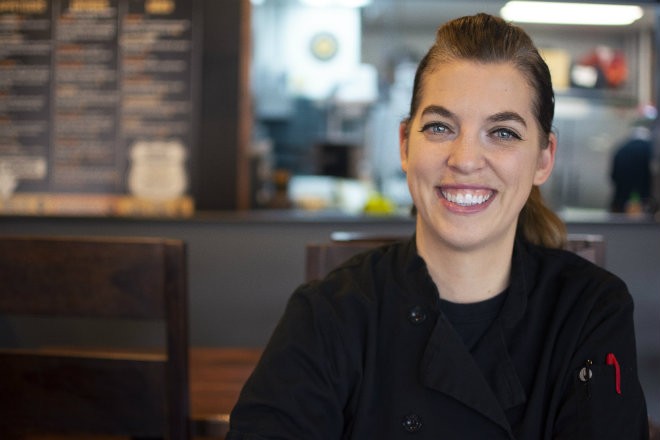 Although she’d never cooked professionally, Sierra Eaves was good at giving the customers at her central Illinois produce stand ideas for how to use her fruits and vegetables. In fact, she was so good at it that it led to a career in the restaurant business.

“I farmed for a while and had a produce stand, and while I was doing that, I met a woman who was the personal chef for an executive with ADM in Decatur,” Eaves recalls. “She always bought stuff from us and would ask me questions about how to cook things. Eventually, she pulled me in for catering jobs when it was my offseason. She told me I was really good at it, but I’d never stepped foot in a kitchen before that. It just clicked.”


Tasting Eaves’ food at the South Grand location of Guerrilla Street Food (3559 Arsenal Street, 314-448-1313) where she is chef de cuisine, you’d assume she was born to cook. In many ways, she was. Raised by her grandparents who’d moved to Illinois from rural Tennessee, Eaves was brought up on home-cooked meals and has fond memories of her grandmother’s garden.


It was natural, then, that Eaves would get into growing her own food, and she enjoyed modest success with her small farm and stand. However, once she had the chance to cook professionally, she realized it was an untapped passion that was worth pursuing.


Eaves would get her chance to do that after moving to St. Louis in 2013. She had just had a child and needed to figure out how to restart her career; at first, she landed in the retail industry, but she quickly realized it was the wrong fit. She left retail for a serving job at Russell’s on Macklind and immediately loved the energy of the restaurant. It confirmed her feeling that she was meant for the food business, even as she longed to be in the kitchen.


Determined to make her way to the back-of-the-house, Eaves enrolled in culinary school at L’Ecole Culinaire, which led to her first “real” cooking job at Edibles & Essentials. At first, she was hired to work the front-of-the-house, but eventually, owner Matt Borchardt gave her the big break she’d been waiting for.


“I’m good in kitchens, so I just took to it quickly and naturally,” Eaves says. “I didn’t really know what I was doing, but I am competent, so it just wasn’t a struggle for me. I’m very bookish, so I will Google something to death if I want to know about it.”


Eaves relished her time at Edibles & Essentials and would have stayed longer (she left after roughly six months), but she resigned because she thought she was going to be moving out of town. When that fell through, she needed a job and was hired at Barrio, just as it was getting ready to open. Though it provided the opportunity to expand her knowledge in the kitchen, the Barrio gig gave her an even bigger opening than she was expecting.


“It’s where I met Brian [Hardesty],” Eaves explains.” He messaged me to tell me he was at the bar. He said he was doing laundry at the laundromat next door, and it didn’t even occur to me that he has kids and a restaurant empire but no washer and dryer — it was suspicious.”


Hardesty had learned of Eaves’ cooking prowess through friends and social media, and he had an inkling she would be a good fit for the company he owns with business partner Joel Crespo, Guerrilla Street Food. After meeting at Barrio, the two clicked, and he told Eaves that he would have some upcoming opportunities with his restaurant group. Not long after that meeting, Eaves left Barrio; she had an offer from Crespo and Hardesty within two days.


Eaves came on with Guerrilla Street Food as a sous chef for its Delmar location and quickly established herself as an essential part of the company. She admits the learning curve was steep, but she relied on her research skills to help her acclimate to a cuisine that was, up to that point, wholly unfamiliar to her.


“It was my first time cooking this type of food, and I had no idea what I was getting myself into,” Eaves laughs. “I’d only eaten at the truck one time and knew of Joel and Brian, but I didn’t know much about the menu. I started Googling Filipino food like crazy and realized how amazing it is. It seemed like a complicated menu, but once I got into it, I realized how much it reminded me of my grandma’s cooking because of the vinegar. In her food, and in Filipino food, vinegar is everywhere. I love it so much!”


Eaves quickly earned Crespo and Hardesty’s respect, so it was natural that when they needed someone to move to their Arsenal store, they would look to her. As Eaves explains it, the South Grand location needed some help with re-establishing standards and reconnecting with the neighborhood, and Crespo and Hardesty knew that she was the one who could best spearhead those efforts.


“This location is so neighborhood-driven,” Eaves explains. “We’re getting everything built back up and are really taking the opportunity to reintroduce ourselves to the neighborhood. I’m very active on social media, so if anyone has any feedback about the location — even if the rug is crooked, I ask them to let me know. Nothing is too small. I want it to be perfect every time — I know that maybe that’s not possible, but that doesn’t mean I’m not going to try.”


Eaves recently took a break from the kitchen to share her thoughts on the St. Louis food and drink scene, the dessert that has brought her to tears and why she is the Oprah of houseplants.


What is one thing people don’t know about you that you wish they did?

I have a huge green thumb and pride myself on growing a big selection of herbs and vegetables in my community garden plot and apartment. I also have a monster collection of houseplants. No one is safe. You’ll end up with a plant, too. I’m like the Oprah of plants.


What daily ritual is non-negotiable for you?

The kiddo and I always take a walk to play Pokémon GO together. It’s been a really great hobby to take up with him, and it’s really fun to see him get so excited with something that I grew up with too. We can both just space out and catch stuff. It definitely affects my day if we don’t get that time. Before all the naysayers chime in, it’s so much more than walking around and staring at your phone. Try it sometime!


If you could have any superpower, what would it be?

Invisibility on command. I jokingly say that I see and hear everything in our restaurant — but I really could if I were invisible. “Always watching!”


What is the most positive thing in food, wine or cocktails that you’ve noticed in St. Louis over the past year?

Young cooks are going out and doing their own thing. The market is so saturated with all these new little start-ups but it’s all so differently styled and presented. There are so many options. The dining scene was stagnant for the longest time and it’s fresh and young now, so no wonder St. Louis is finally getting recognized as being a food destination. I’m also really enjoying watching the NA beverage scene evolve.


What is something missing in the local food, wine or cocktail scene that you’d like to see?

I am really eager to see a Michelin star awarded in St. Louis. We have restaurants that are every bit as authentic and inspiring as any other location snatching up stars. It’s only a matter of time. We’re attracting and encouraging some really talented people.


Who is your St. Louis food crush?

Michael Gallina. Vicia is my absolute favorite restaurant in St. Louis, and I’m so proud of everything he and Tara have accomplished. Every experience I’ve had there is amazing, and the menu is basically everything I love in life — sustainable meat, local produce and inventive preparation. Every time I go, I leave inspired to try something on my own, usually after a, “Oh, wow! Why haven’t I thought of this?” moment. It’s not often you can be consistently delighted while never being bored by a restaurant. Their staff is unbelievably educated about their menu items too. I can ask really specific questions and get just as specific answers. The first time I went, I had a buffalo-grass tart with blackberry sorbet and I cried eating it. The last time, I had a fermented carrot hot sauce with the vegetable platter that we ended up requesting a whole side of just to eat with bread (which the kitchen laughed about, but it was worth it). It’s just amazing. I’m fangirling as I write this, that’s how much I love them.


Who’s the one person to watch right now in the St. Louis dining scene?

I’m watching the entire crew at BEAST Butcher & Block. I’ve been saying for a hot minute that Ben Welch [at the Midwestern Meat & Drink] is dominating barbecue (I mean duh, have you experienced his food?), but I really think that David Sandusky and his staff are going to do some cool stuff with elevated barbecue. I’m really excited to see how it develops and refines, especially with the shift back to fine dining and away from small plates.


Which ingredient is most representative of your personality?

Black pepper. You know it’s there, you might not always like it, but it’s often just what a dish needs to bring balance and clarity.


If you weren’t working in the restaurant business, what would you be doing?

I can’t imagine myself doing anything else. I bounced around in retail for a while before settling in a restaurant. If income wasn’t an issue, I’d be a stay-at-home mom. My kiddo is my life.


Name an ingredient never allowed in your restaurant.

I’m not sure I have that kind of power (yet), but I’m not sold on the faux-meat products that are trendy right now. There are so many other sustainable, responsible options that chefs can turn to. I’d much rather use responsibly-raised meats or other alternative proteins. I don’t need my non-meats to act like meats. Maybe I’m a traditionalist in that sense?


What is your after-work hangout?

Bed! I’m an adult. I don’t have time for after-work shenanigans. My pre-work hangout is Lola Jean’s [Giveback Coffee] on Macklind [Avenue], since Russell’s is no longer open in the day.

I have long been known to indulge in the Golden Arches. Number six, large, with sweet and sour sauce and a Dr. Pepper. I’m consistently, predictably terrible like that. The Sourdough King from the other big burger chain is also amazing, but odoriferous. Warn your loved ones, seriously. It could be a relationship killer.


What would be your last meal on Earth?