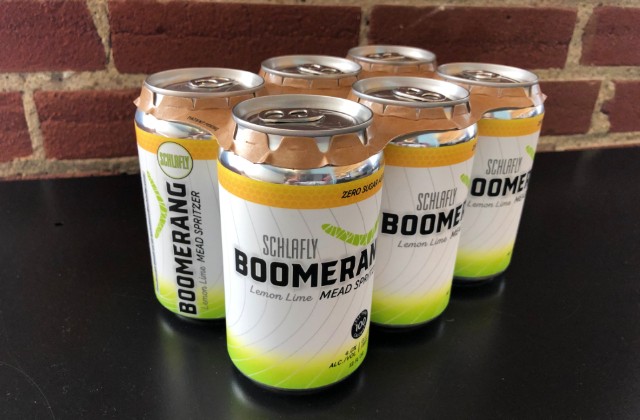 If there was one alcohol craze that dominated 2019, it was the increase of hard seltzers flooding the market (and our livers). Now, Schlafly Beer (multiple locations including 2100 Locust Street, 314-241-2337) is hoping to bite some of that same gluten-free and calorie- and carb-conscious market with a spritzer of its own.

Dubbed Boomerang, the first flavor of Schlafly's mead spritzer, lemon-lime, is set to be released on tap and in cans at both brewery locations this Friday. The spritzer will also be available in retail stores in mid-December.

"Hard seltzers and spritzers have been huge, but we feel like there's a segment of consumers out there who are interested in something that's locally produced and a bit more artisan-produced, and that's how we approached Boomerang," says Schlafly lead brewer Jared Williamson. "From a brewer's standpoint, I really wanted to do something in this category but go about it in a different, more crafted way than anyone else is doing so far."

Williamson says the line will grow to include more flavors over time, but what unifies them all is an incredibly simple list of ingredients and low calorie and carb count. The introductory lemon-lime flavor, for example, is made with just mead (water and honey) and natural lemon and lime flavors. Zero sugar is added to the spritzer, which clocks in at 90 calories and only three carbs per twelve-ounce can. At 4 percent ABV, the gluten-free sipper is lightly carbonated and offers a refreshing change of pace from the sometimes overly boozy flavor of hard seltzers.

"For people who don't know what mead is, this isn't going to be a normal mead, but for people who do know what it is — fermented honey — this is a really interesting kind of addition to this whole seltzer and spritzer category,"  Williamson says. "We're using honey, water and citrus flavor and fermenting it with yeast; it's very simple and classic, but also a new-school presentation."

Mead even inspired the drink's name: When you throw a boomerang, it eventually comes back around to you, much like, Williamson says, the recent comeback of mead, an ancient beverage. Boomerang isn't the brewery's first foray into mead, but it's the only "sessionable" and completely dry offering that Schlafly has released in cans.

"People think about meads and they think about these really sweet red wines, which is what they were traditionally, but this is completely fermented out, so when it hits your palate, there's perceived sweetness, but then it dries out really quickly," Williamson says. "It's not like drinking a sweet beverage by any means; it's very crisp and refreshing, and then it has that citrus pop. The end beverage is something unlike I've ever had."

Well before the December release, Schlafly has been testing various flavors of the mead at both local beer events and through R&D with family and friends. Lemon-lime was deemed the "champion" as it's a familiar flavor, but Williamson says that customers can look for new flavors in 2020, including possible berry and tropical mead spritzers. He says the brewery will likely be testing new flavors at future beer events and festivals around town.

"We were the first craft brewery to open in the shadow of Anheuser-Busch, and now we're trying to do something new in the industry with these spritzers and seltzers and thinking a little bit outside the box," Williamson says. "We don't want to just be the next spiked water. This is the hottest thing since IPAs in the beverage industry. We're excited with what we've come up with this year and to get to market before the year's even out."

Packaged in classic twelve-ounce beer cans, Boomerang offers something else that most hard seltzers do not, as Williamson notes:

"These will fit your Koozies!"