Just in time for Thanksgiving shopping, a dedicated wine store and artisan food shop has opened in Shaw.

Wilbraham, an Australia native, and Martin lived in San Francisco for many years before buying a home in the Shaw neighborhood of St. Louis about a decade ago. At Wild Olive Provisions, the pair are focused on offering Australian and California wines, drawing from their personal experience and knowledge to curate their selection.

"When we lived in California, we were frequently up in wine country, and each year we go back, and we go back to Australia as well," Wilbraham told RFT in October. "The wineries that we really love tend to be family-owned and more like farms, because that's what they really are, right? We've found that over the years more wineries, especially the family-owned ones, are very focused on sustainable practices and growing varietals that are best paired with the climate and environment there. Every now and then we'll have wines outside of Australia and California, but we're trying to stick with what we know."

Although Wilbraham and Martin are mostly stocking Australian and California wines, they're aiming to offer something at every price point — Wilbraham says the goal is to offer affordable wines ideal to serve with weeknight dinners as well as higher-end (and higher-priced) wines for those wanting to spend a little more or celebrate something special. The shop also serves wine by the glass and a small selection of artisan cheeses to pair with them. 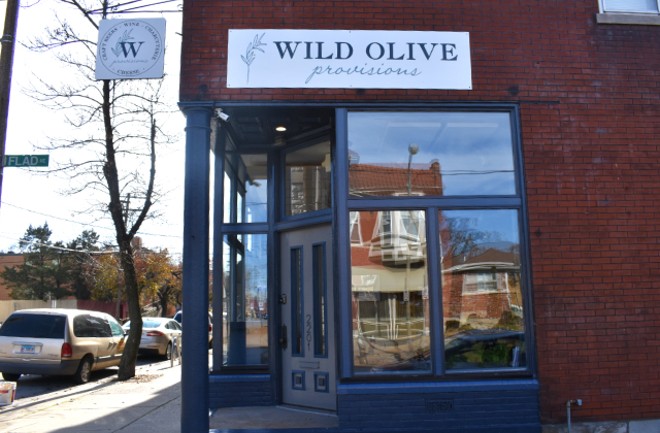 Wilbraham says the original concept for Wild Olive Provisions was smaller in scale, but when the storefront at 2201 South 39th Street became available — formerly the offices of Chicago-based Omega Yeast — it was too tempting to resist. As such, the scope of the shop was expanded to include dine-in dishes, more artisan cheese and gourmet food options, local craft beer from Rockwell Beer Co. and Alpha Brewing Co. and craft spirits, including those from St. Louis-based StilL 630.

"Our space is so big that we thought, 'How will we fill it? Where am I going to put everything?'" Wilbraham says with a laugh. "My husband and I have done all the work on it ourselves, and we're proud of it."

The shop will also sell grab-and-go boxes perfect for picnics at nearby favorites including the Missouri Botanical Garden or Tower Grove Park, or just a ready-made meal to take the work out of dinnertime for folks in the neighborhood.

Wild Olive Provisions currently offers limited seating inside for its dine-in menu items, with plans to add patio seating next spring. For now, though, Wilbraham is just excited to share her passion for Australian and California wines with St. Louis, and of course, to see her and Martin's dream become a reality.

So far, it seems that Shaw residents are sharing that feeling as well, with locals sharing photos of the shop and its offerings off and on over the weekend.

"The excitement in the neighborhood is just great; people are knocking on the windows and saying how excited they are," Wilbraham adds. "The support so far has been phenomenal."