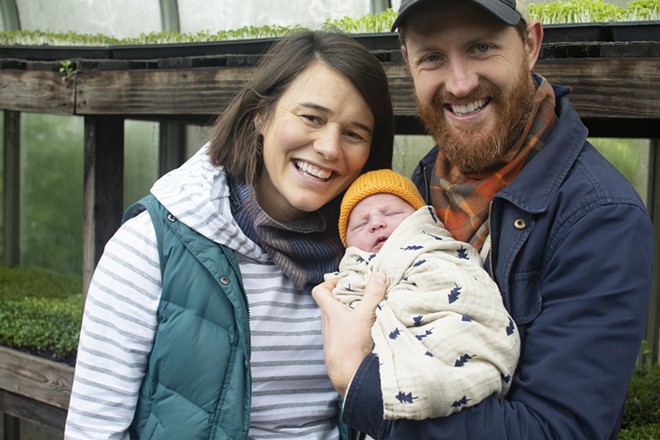 Mary Densmore and James Meinert may be connected to the soil of St. Louis, but the roots of their small microgreens operation and apiary, Bee Simple City Farm (beesimplecityfarm.com), run all the way to a two-person book club in Central America.

“We met when we were living in Nicaragua doing different volunteer work for the same program,” Meinert explains. “We really clicked the second year of living there together and decided we wanted to read a book together — sometimes out loud, sometimes on our own. It was Barbara Kingsolver’s Animal, Vegetable, Miracle, her book about moving to the country and living off the food she grew. Mary loved that idea, and I was teaching gardening and farming there. We realized we had it in our blood and knew we wanted to do some growing.”

That Densmore and Meinert found each other in the first place is its own small miracle. Growing up in Marietta, Georgia, Densmore loved the outdoors and playing explorer in her backyard and neighborhood creeks. However, it was her passion for service and helping others that led her to do volunteer work as part of a Jesuit program in Nicaragua after college.

Meinert’s call to Central America began in college where he became passionate about liberation theology and social justice. Hailing from rural southern Missouri, Meinert grew up on farms ranging from five to 95 acres and watched as his dad pursued his passion for growing food. He used those skills in Nicaragua as part of the Jesuit volunteer program, where he and Densmore bonded over their shared passion for small-scale agriculture.

The pair began dating shortly before the program ended, and they made a pact that they would figure out a way to continue their relationship, as well as pursue opportunities to serve others. They weren’t sure if that would be in Missouri or Georgia, but when Meinert found opportunities for them with two different Catholic Worker intentional communities doing work with the unhoused and refugees in St. Louis, they decided this was where they needed to be.

While living in these communities, Densmore and Meinert were introduced to New Roots Urban Farm and instantly felt as if they’d found their place — and developed a love-hate relationship with the product that would later become their signature.

“We started gardening and farming at New Roots in 2009, and that’s when we learned a lot about microgreens,” Meinert explains. “At that point, we hated them. They were tedious, and we hadn’t developed the systems for growing and farming them. As Mary built the business, she had to learn how to make growing them sustainable.”

Densmore and Meinert saw New Roots as an incubator for growing their farming business while they worked in different careers — she had begun teaching at a language immersion school and he was enrolled in graduate school studying women and gender studies. However, when Densmore got burned out on teaching she was ready to take the leap and pursue her true calling.

“The teacher’s life is so stressful, and she knew she loved farming,” Meinert explains. “She thought, ‘How can I figure out how to be a full-time farmer, because that’s what I want?’ We thought about the space we had and figured we could maybe make it work by doing microgreens, so I took on a full-time job to support us and she went into business.”

Densmore and Meinert realized that they would need to diversify their offerings if they were to make Bee Simple a full-time operation. This led Densmore to begin making soaps and lotions they could sell at the farmers’ market. It also prompted Meinert to take up a skill he used to watch his dad do when he was a kid.

“He was a beekeeper until I was four,” Meinert says. “He kept all of his old equipment sitting in a barn, and he let us use it. I’m using his smoker from the early '80s. Plus, Mary’s mom got into beekeeping about a year before we started, so she got really excited and bought us our bee jackets and veils. There’s been a lot of family support and connection.”

Now in their fifth year, Densmore and Meinert have grown Bee Simple City Farm to the point where they are both working there full-time (Meinert quit his other full-time job earlier this year when Densmore became pregnant with their first child, who was just recently born — the reason Meinert is the only one doing the interview.) Although the business is still a modest operation, he and Densmore are proud of the relationships they have built with several chefs around town and the way they have been able to grow their business without compromising what they feel is right.

“We’ve had to figure out how to make this work and keep our values,” Meinert says. “We are very partial to growing in a way that we feel has as minimal impact on the Earth as possible. We try to have integrity, but the weather kicks us in the ass sometimes. Our biggest frustration is when we have to short someone on their order — it breaks our hearts, and 99 percent of the time it’s because of the weather. However, our chefs are loyal because they see we are trying to grow in a holistic way — plus stuff grown in sunlight has a better flavor. It’s hard to grow, but we feel there is value in how we do it.”

Densmore and Meinert took a break from the farm — but not a break from loving their brand-new baby girl — to share their thoughts on the St. Louis food community, the physical toll of farming and why sometimes there’s nothing better than some deep-fried Buffalo wings.

What is one thing people don’t know about you that you wish they did?
That we grow all of our microgreens in soil under sunlight — no additives, no water pumps, no fertilizers, etc. We think this gives them the best flavor.

What daily ritual is non-negotiable for you?
Stretching! Our hands and bodies get tired from lifting so many trays and harvesting microgreens, and a lot of the movement is repetitive. We take a break in the middle of workdays, face the sun and stretch ourselves.

If you could have any superpower, what would it be?
Probably the ability to control the weather! Not only would it be helpful with climate change and natural disasters, but our work is pretty weather dependent. Also the Tower Grove Farmers’ Market is a weekly market for us and it is so much more enjoyable when it is sunny and warm but not hot. If we could control that, it would be amazing.

What is the most positive thing in food, wine or cocktails that you’ve noticed in St. Louis over the past year?
Known & Grown has been developing and is finally off the ground. Chefs and foodies want to know that they are supporting farmers that use the most ecological growing practices, and Known & Grown is going to support local farmers by visiting their farms and then verifying and supporting those farmers.

Who is your St. Louis food crush?
Chris Meyer of Kounter Kulture. She loves and takes care of her farmers. They are so generous over there and are always thinking about how to expand collaboration and highlight other people’s work. She’s a damn hard worker and makes good food.

Who’s the one person to watch right now in the St. Louis dining scene?
One of our favorite chefs who is between ventures right now is Tello Carreón. We loved what he did with Nixta and Alta Calle and are waiting to see what his next move is.

Which ingredient is most representative of your personality?
I guess the sunflower microgreen. Like them we are crunchy, a little nutty and we stay fresh.

If you weren’t in this business, what would you be doing?
Nothing that makes money! We love the community and care in the food industry, so something with people and relationships — maybe counseling? A surprising number of people stop at our booth at the farmers’ market and connect and visit, and we’re glad they do.

Name an ingredient never allowed in your kitchen.
Factory-farmed meat and fruits and veggies out of season. We cook a lot (we call our kitchen the Bee Simple café), and we try to get our meats and veggies both local and seasonal.

What is your after-work hangout?
What is this “after-work” you speak of? But, when we do have free time, we like to get some quick food and drink some bubbly water. One of the closest sandwich shops to where we live and work is Medinas Mediterranean Grill at 14th Street and Washington Avenue. We go there after a Friday harvest to get sandwiches, and they have soda-water on tap, which makes us sound dorky, but we love it.

What’s your food or beverage guilty pleasure?
Wings slathered in wing sauce with blue cheese. We tend to eat really healthy; we cook a lot and put our microgreens on most of what we eat, but sometimes you just want deep-fried, fatty, sauce-dripping chicken wings!

What would be your last meal on Earth?
Both of us grew up having pizza and ice cream as a special meal for birthdays or even just family-night Fridays. Last meal? We’d probably have to eat some homemade pizza and chocolate ice cream.