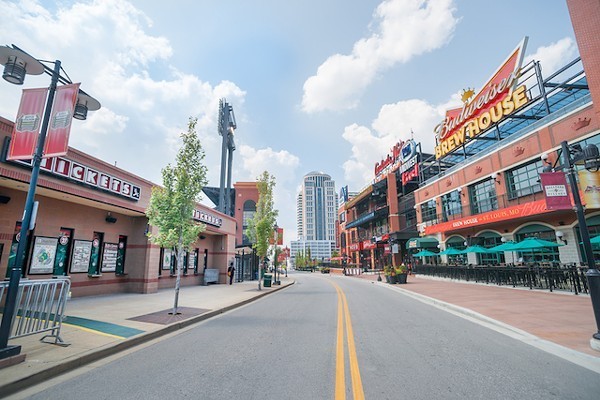 Three new restaurant and entertainment concepts will open on the west end of the $260 million Ballpark Village expansion in 2020, according to a joint press release from the St. Louis Cardinals and the Cordish Companies.

This is the first in what's likely to be a series of announcements about Ballpark Village's expansion, which will, in total, add 75,000 square feet of ground-floor dining, entertainment and retail space to the downtown development. This second phase of development is currently 92 percent leased according to the release.

“It is incredibly exciting for the Cordish Companies to join the Cardinals in announcing three dynamic concepts for the growing Ballpark Village neighborhood,” Nick Benjamin, vice president of development for the Cordish Companies, said in the release. “Our focus from the onset has been to create a world-class neighborhood with diverse offerings for our guests and residents. We have taken great care to curate a tenant mix for the second phase that complements the existing offerings at Ballpark Village and creates a variety of local and national tenants as well as dining, retail, lifestyle and entertainment-based concepts.”

The second dining concept, Davio’s Northern Italian Steakhouse, plans to open across from Busch Stadium’s main entrance at the base of the soon-to-open Live! By Loews hotel. The menu, crafted by chef-owner Steve DiFillipo, features housemade pasta, Prime Brandt beef steaks and a lengthy wine list. The Boston-based Italian restaurant's St. Louis location will be one of twelve across the country.

Baseballism, the category leader in baseball lifestyle apparel, will also open at the base of the Live! by Loews hotel complex. The company operates nine retail stores across the country in locations such as Fenway Park and Wrigley Field and will sell a wide range of baseball lifestyle products for Cardinals fans, including specialty glove-leather items like handbags, wallets and phone cases, as well as St. Louis-inspired T-shirts and baseball caps.

“We are excited to welcome Sports & Social St. Louis, Davio’s Northern Italian Steakhouse and Baseballism to Ballpark Village,” Bill DeWitt III, president of the Cardinals, said in the release. “These concepts will bring great new energy to Ballpark Village and will help us attract new residents, office workers and visitors to downtown.”

For more information on Ballpark Village and its expansion, visit www.stlballparkvillage.com.