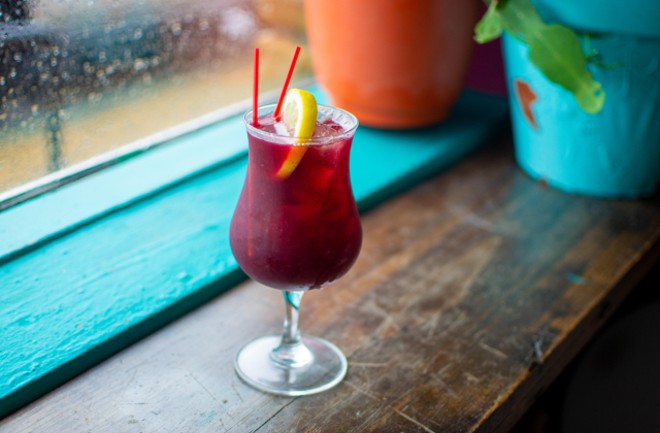 The Purple Margarita ain’t your traditional 'rita — and isn’t suited for just anyone's liquor tolerance. Upon ordering the cocktail at Taco Circus (4940 Southwest Avenue, 314-899-0061), owner Christian Ethridge immediately informs me that the drink comes with its own set of consequences.

“It can give you the sweats and will make your face hot if drunk at a normal speed,” Ethridge says.

Taco Circus has been open in its new location on the edge of the Hill neighborhood since September and has been packing in the crowds ever since. The restaurant's bar program is one of its new features at the relocated space, which is also serving an expanded menu of the Tex-Mex favorites that made it famous. As always, the portions of tacos, burritos, nachos and more are large here, which provide the perfect foil for soaking up booze.

“We serve large, over-the-top portions in true Texas fashion, and this is a concept that hadn’t been fully explored in the region,'' Ethridge says.

The marg comes with a two-drink limit — and after securing a buzz after three sips, I can’t imagine the tolerance of a person who could drink more than two of them. The drink is made with overproof tequila, Plantation O.F.T.D. Overproof Dark Rum, lemon, granulated sugar, cassis and a purple syrup made with blueberries that have been soaked in simple syrup and the Plantation rum. The cocktail is a smooth, slightly sweet concoction that definitely gets the job done.

Like the Tex-Mex tacos, burritos and more that inspired the Taco Circus menu, the Purple Margarita was influenced by Ethridge’s memories of his hometown of Austin, Texas.

“The idea behind the Purple Margarita came from this place back home called Baby Acapulco," Ethridge says. "They had a drink called the Purple Margarita and it also came with a two-drink limit. I wanted to create a higher-quality version, so I turned to the bar managers to bring the creation to life.”

The architects of Taco Circus' cocktail program are St. Louis bar industry vets Eric Inthaluexay, who has worked at Atomic Cowboy, Mission Taco Joint, Layla and Nixta, and Casey Colgan, co-owner of Parlor in the Grove. Aside from the booze-forward Purple Margarita, the restaurant's cocktail list features many creative and classic cocktails, including frozen and regular margaritas, a traditional paloma, a mezcal margarita and a large selection of draft and bottled beers.

From Thursday to Saturday, in anticipation of wait times and to make full use of its new bar program, there is an overflow bar next door called the Mezcal Bar. Belly up to the bar while you wait for a table and order drinks from a separate mezcal-heavy cocktail menu, including that mezcal marg. (Due to its high ABV, the Purple Margarita is not served at the Mezcal Bar.)

In the next few weeks, Taco Circus will introduce a late-night happy hour and extend its hours until 1 a.m. on weekends. Just don’t say we didn’t warn you about the Purple Margarita or the ensuing craziness you'll likely experience after downing it.