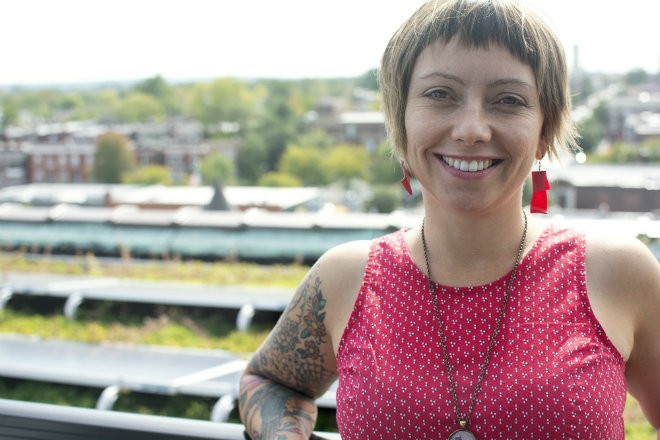 As far back as she can remember — and probably even farther — Jenn DeRose has been fascinated with the Earth. In fact, she vividly remembers her first call to activism: She was in the second grade.

"I distinctly remember my first Earth Day," DeRose says. "We planted a tree and learned about recycling. I remember coming home and telling my parents, 'This is what we are doing now. Things are going to change.'"

Looking back, DeRose realizes she was destined to become an advocate for the environment and our food system. From a young age, she was mesmerized by the poster of the Earth that hung above her bed and always found herself gravitating toward subjects about the planet and its ecosystems. In the fourth grade, she started a "World Club" at her school. In the fifth grade, she wrote a report on Siberian tigers and learned about extinction. She was horrified and committed then and there to do her part to change things.

Today, DeRose is doing her part to effect that change as the manager of Known & Grown (www.knownandgrownstl.org), an initiative of the Missouri Coalition for the Environment whose mission it is to connect sustainable farms within the "St. Louis Foodshed" with chefs, restaurateurs and consumers. As DeRose explains, Known & Grown arose out of the realization that even for well-intentioned consumers who want to support local, sustainable agriculture, it can be difficult to really know the practices behind the food we consume.

"Small farmers are really struggling; in our foodshed, less than one percent of the land is used for fruits and vegetables," DeRose explains. "The rest is used to feed livestock or produce ethanol or garbage food. It's really hard for consumers to know where their food is coming from, because labels can be so confusing. People mean well, but they end up spending more money on products that aren't what they think they are. Known & Grown makes it easier for consumers to make the choices they want."

At Known & Grown, DeRose feels like she has finally landed where she is meant to be after years of struggling to figure out her path. She admits that, after high school, she got off track for a while and had a hard time trying to figure out what she wanted to do. Around that time, she got into the local punk and DIY scene because it aligned with her values. She also found herself working in restaurants, even though she says she was terrible at it.

"I was a terrible server, a bad line cook, a terrible bartender," DeRose laughs."I loved it though. I love restaurants and chefs. I just wasn't any good at it."

Eventually, DeRose felt the pull to go back to school and opted to study sustainability at Washington University. Her education led to a job with the Green Dining Alliance, where she found herself again working in a restaurant environment, but this time, in a role that was a better fit.

During this period, DeRose was also regularly involved with the Missouri Coalition for the Environment. The organization was trying to form a regional brand that would support sustainable Missouri farmers, and DeRose helped them in their efforts. When that idea evolved into Known & Grown, she knew it was her dream job.

"I've been training my entire life for this," DeRose says. "I've worked in every part of a restaurant that you can, so I speak the language. And I'd never claim to be a farmer, but I've been a gardener for a long time and enjoy the act of growing food. I don't believe in fate, but I feel like I've been led along a path that makes sense to where I am right now."

DeRose recently took a break from managing Known & Grown to share her thoughts on the St. Louis food scene, how she incorporates her sustainability ethos into her morning routine and the local chef who's been known to bring a tear to her eye.

What is one thing people don’t know about you that you wish they did?
I'm an anxious, secretly introverted person who needs downtime after doing any public speaking or talking to people at social events. I channel my anxiety to do what needs to be done, and then I need to hide for a bit to recover.

What daily ritual is non-negotiable for you?
My morning French press coffee ritual. It's not local, it's not environmentally responsible, but I need it to live. (Pro-tip: Look for the Rainforest Alliance and Fair Trade logos on coffee beans to make sure they're grown with minimal environmental impact and they're paying fair wages to farmers.)

If you could have any superpower, what would it be?
The power to force others to look at the world through someone else's eyes. Then flight.

What is the most positive thing in food, wine or cocktails that you’ve noticed in St. Louis over the past year?
The focus on local ingredients and the shunning of plastic trash like straws and Styrofoam.

What is something missing in the local food, wine or cocktail scene that you’d like to see?
A common understanding about what "local" and "sustainable" actually mean. Luckily, there are programs out there that are doing a good job of education, like the Green Dining Alliance (my previous job) that address holistic restaurant sustainability, and my current job (Known & Grown), which focuses specifically on how and where food is raised. I'm hopeful that chefs and diners will start using our website (knownandgrownstl.org) as a resource to find environmentally responsible food grown and raised within 150 miles of St. Louis.

Who is your St. Louis food crush?
Chef David Kirkland [at Turn]. He once served me a grilled zucchini that came from Urban Harvest STL's rooftop garden, and I almost cried because it was so good.

Who’s the one person to watch right now in the local dining scene?
Watch Known & Grown! We are going to be all up in everybody's business before you know it.

Which ingredient is most representative of your personality?
Nutritional yeast. It seems weird but it gets the job done.

If you weren’t working in the food business, what would you be doing?
It's been so long that I've been in and around the restaurant industry that it is difficult to imagine doing anything else, but I suppose I could see myself working as a sustainability manager for a city or college. Or as a goat farmer.

Name an ingredient that shouldn't be allowed in restaurants.
Styrofoam! Winter tomatoes! So gross.

What is your after-work hangout?
I don't really have a regular after-work routine. I like to stay busy (I have a second job doing environmental consulting work with BlackRock Consulting and I have a few volunteer roles), but I love to go hiking and walking outside as much as possible, whether that's down the street to Tower Grove Park, Don Robinson State Park or any other of Missouri's beautiful outdoor spaces.

What would be your last meal on Earth?
A pile of vegan Maine Event cookies from SweetArt; a bowl of home-popped, locally grown popcorn; and a coffee stout from Schlafly or Perennial Artisan Ales.