After a violent carjacking that left a local man in a coma, members of the community are rallying to support him and his family.

On Thursday, October 3, around 9 p.m., Tommy Gage was in the middle of running an errand for his wife, Janice, and his mother-in-law, Carolyn McKinney, who owns Iowa Buffet (2727 Winnebago Street, 314-776-8000). Gage had just returned to the south-city bar with a package of hamburger buns and left his car running outside while ferrying them into the bar. The car had been having difficulty running, which is likely why Gage left the car idling outside, Janice told KSDK last week.

Surveillance footage released from a neighbor after the carjacking shows Gage exiting the bar as the thief is preparing to drive off in the vehicle. Gage, a former Olympic boxer who once fought off an armed robbery at nearby O'Malley's Irish Pub with only a broomstick, then jumped on top of the car's hood. The assailant attempted to throw Gage, who was clinging to the hood, off the car by reversing the vehicle and then popping it back into drive several times, but was unsuccessful. Finally the thief drove off for good, with Gage still holding onto the hood. At some point off camera, Gage was thrown from the car, run over by the assailant and dragged halfway down the block before being left for dead.

Hearing the altercation from inside the bar, Janice and customers rushed outside in time to see the carjacker exit the vehicle and take off on foot. Police are still searching for the suspect. According to reporting by KSDK, Gage sustained severe injuries in the attack, with doctors saying that he broke "nearly every bone in his body." Gage has been in a coma since the night of the attack and remains in critical condition in an intensive care unit.

Regulars of Iowa Buffet, a beloved establishment for more than three decades, quickly rallied to help Janice and McKinney defray the costs of Gage's medical bills. Ellen Hilton Cook, a friend of the family, recently launched a fundraiser for Gage and the bar on Facebook, which has so far raised over $3,000 in less than a week. Originally seeking $3,000 for Gage and family, the fundraising goal was increased to $5,000 this weekend after quickly exceeding the initial figure. As press time, the fundraiser had raised approximately $3,427.

On the fundraiser page, Cook says that Janice recently underwent heart surgery in addition to losing her father (and McKinney's husband) in recent months. "[Carolyn] is the first person to make sure the neighborhood kids are OK and knows all the regulars," Cook writes. "She takes pride in her family bar and her family and her laugh is so contagious."

Cook posted that she is hoping to host a benefit party for Gage and Iowa Buffet as well.

"This is my neighborhood bar and they have seen me at my worst and my best," Cook writes. "There’s been times when they’ve fed me when I was hungry, made sure I was taken care of when I was drinking heavily, I even took a shower in the back house when my gas was shut off. I walked into the bar with a towel on my head. It was funny. This bar and its people mean the world to me. Let’s help them out."

RFT has reached out to Cook to learn more about the fundraiser and benefit party. (Update: Over email, Cook confirmed that the benefit party for Gage and his family will be hosted on Sunday, November 17 from 1 to 11 p.m. at Iowa Buffet. Stop in for a beer or two, grab a burger and enjoy live music from Soulard Blues Band, Annie and the Fur Trappers, Bob Case and Steve Vogel to show your support for Gage and the south-city bar.) 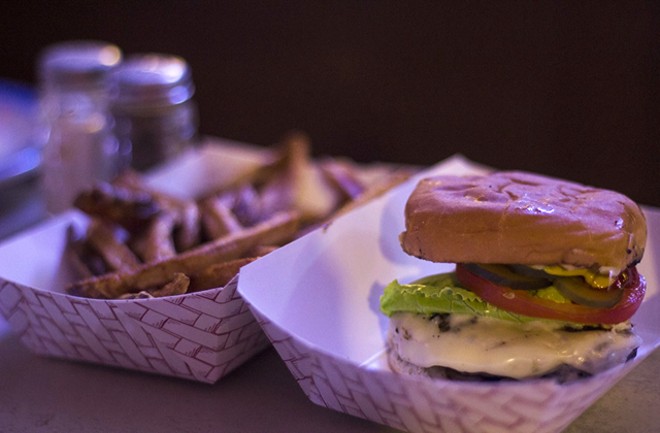