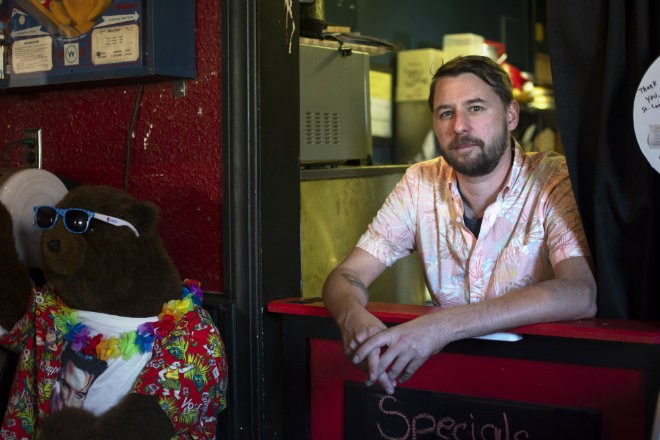 Chris Ward was sitting at his desk, working his day job as a senior copywriter, when he got a fateful email from his friend. In it was a link to a Craigslist ad with the intriguing subject line "For Sale: A Party Bear." Before he knew it, things were taking on a life of their own.

"My friend Kris found this ad on Craigslist and sent it to me, saying, 'Wouldn't it be funny to buy this party bear?'" Ward recalls. "I was like 'Oh yeah, we definitely need this party bear,' but we didn't have $200 to spend on a joke bear. As a joke, we set up a GoFundMe — and really, I think there is something icky and privileged about raising money for a joke, but this was the one instance when we decided to do it. We raised $400."

An ad for a giant brown bear sporting a Hawaiian shirt may have been the catalyst for opening Party Bear Pizza (4701 Morganford Road), but Ward's desire to open a pizzeria started much earlier — during his childhood spent in Rushville, Illinois. After working jobs in the coal mining and livestock industries, his parents decided to switch courses when they stumbled upon an opportunity to buy an established pizzeria when Ward was in eighth grade. Although he saw all the hard work it took to make it successful, he couldn't help but feel an affection for the business and always imagined he would open a pizzeria of his own someday.

He put that idea on the back burner and instead pursued broadcasting and journalism in college. After graduating, he worked several jobs in his chosen field that brought him to St. Louis. One of his first impressions about the city was its vibrant entrepreneurial spirit, and he couldn't help but feel moved to be a part of it.

Ward began developing his Party Bear Pizza idea once he had the bear, but it wasn't until he and his partner, Melanie Meyer, came across an opportunity at the Silver Ballroom that it got serious. Self-described "pinball nerds," the pair would regularly frequent the south-city bar, and got the idea to make their restaurant dreams official when they learned that its small kitchen was available.

Their idea was quirky: Ward would operate Party Bear Pizza alongside Meyer's concept, a Korean-inspired street food counter called Tiny Chef. However, as odd as the combination sounded to those on the outside, Ward and Meyer were convinced it would work.

"We know it's a weird name, but we thought it would be fun because we think food should be fun," Ward explains. "We think of it like Batman and Robin or Butch Cassidy and the Sundance Kid — two great tastes that taste great together."

Ward and Meyer opened Party Bear Pizza and Tiny Chef in April and have been thrilled by the response they've received. Just as exciting for Ward is how much working alongside Meyer has been a source of inspiration for his pizzas; their impromptu collaborations have resulted in a host of off-the-wall ideas, including a Doritos Locos pizza and even a pie inspired by the movie Gremlins.

His success has even impressed his parents, who were a bit apprehensive of him starting his own pizzeria because of how difficult they knew it would be.

"My mom and dad love it now," Ward says. "I've always wanted to do things that I've had fun doing. When you make something, and watch people bite into it and then see the look on their face and know they love it, it's such a cool feeling. Making food for people to make them happy — what else do you want to do?"

Ward took a break from the pizza counter (and his day job as a copywriter) to share his thoughts on the St. Louis food and beverage scene, his pizza pedigree and why you shouldn't be surprised if a Road House-inspired pie is his next creation.

What is one thing people don’t know about you that you wish they did?
I have a long pizza pedigree! I’ve been part of our family’s pizza business in central Illinois for nearly 25 years, beginning in eighth grade. As kids we used to take pepperonis and throw them so hard they’d stick to the ceiling when my mom wasn’t looking, which is highly frowned upon in today’s pizza climate. I also did food prep for Monte Bello Pizzeria for a year to make a little extra money and to just be around pizza. That place is amazing. It’s legit in the basement of a house and opened in 1950. You have to go.

What daily ritual is non-negotiable for you?
The world’s longest shower. It’s the only place left where no emails or texts can reach me.

If you could have any superpower, what would it be?
The ability to say “SWAYZE!” and snap my fingers, and Patrick Swayze appears for fifteen minutes at a time. We’d hang, eat pizza. It’d be pretty chill. I’ll low-key ask him about Road House, Point Break and To Wong Foo — my three favorite Swayze films. It would only be fifteen minutes at a time though, because I am very busy. As he knows.

What is the most positive thing in food, wine or cocktails that you’ve noticed in St. Louis over the past year?
Not only the diversity in types of food, but the fact that St. Louis is competing with some of the best food cities in the entire country. And especially with pizza — we get a bad rap. It’s a good time to be alive and hungry in St. Louis.

What is something missing in the local food, wine or cocktail scene that you’d like to see?
Ever since I moved back from New York, I can’t seem to find a good penne alla vodka slice anywhere around here. So that will change soon.

Who is your St. Louis food crush?
My partner, Melanie Meyer. Working and creating alongside her in the kitchen is like having a front row seat to watching a culinary wizard. She is actual magic to me.

Who’s the one person to watch right now in the St. Louis dining scene?
Again, this will sound biased, but it’s correct: My partner Melanie Meyer, a.k.a Tiny Chef. Witnessing people’s faces as they taste her recipes, and seeing people discover how good she really is, makes my heart sing. I feel like Bradley Cooper discovering Lady Gaga, except for food, and also the movie is actually good this time.

Which ingredient is most representative of your personality?
Truffle oil. Maybe it’s not for everyone, and a little also goes a long way.

If you weren’t working in the restaurant business, what would you be doing?
I’ve been a comic book writer, a dance competition videographer, journalist, a certified pharmacy tech, marketer, a sandwich delivery guy … so the short answer is “something,” as long as I’m happy doing it and people are happy with my work. But I’ve been working toward starting this pizza spot up for well over ten years, so I hope people try it out. I can’t go back to filming dance competitions.

Name an ingredient never allowed in your restaurant.
Nothing personal, but it’s Provel. This statement enrages people. If you’re the kind of person who gets enraged over regional cheese opinions, book a float tank today and relax.

What is your after-work hangout?
St. Louis’ hottest new after-work spot is My Couch. It’s got everything: a loud cat, half a jar of dry-roasted peanuts and an Amazon remote control into which I speak tiny wishes for streaming content on my television.

What’s your food or beverage guilty pleasure?
We’re in the golden age of fast food, and that Chicken Tater Munchie Meal from Jack in the Box is my jam. And I don’t feel guilty about it. If it tastes good, eat it. I may also be the last person my age who dines in at a McDonald’s. I find something romantically tacky and comforting about it. I love being in a hurry, but in a booth alone. There’s a nice lady that works at my regular spot who always says to me sweetly, 100 percent without irony, “Thank you for choosing MacDonald’s.” It makes my entire day.

What would be your last meal on earth?
My mom’s pot roast. Willie Nelson said, "Cook a perfect pot roast, and you’ll never dine alone." Also, I have to include my Grandma Kate’s made-from-scratch potato and noodle soup. She’d put two ice cubes in our bowls so we wouldn’t get burned — don’t want to start the afterlife with a burned mouth.