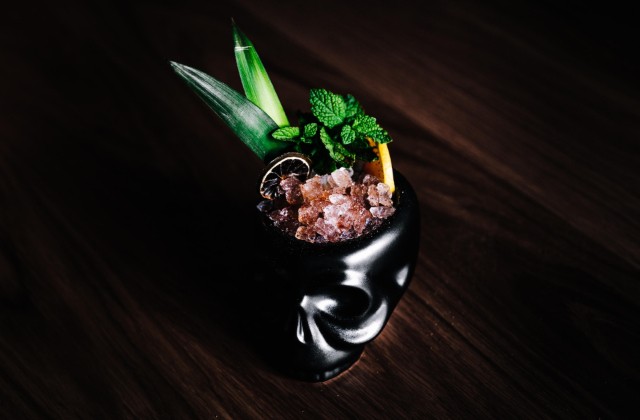 Just in time for Halloween, St. Louis is getting its first spooky pop-up bar. Tonight, Corpse Reviver will debut inside the Hideout (210 North Euclid Avenue), serving a selection of creepy cocktails amid some scary-good decorations, from spiderwebs and skeletons to matte black skulls and gothic candelabras.

The Hideout is the newest venture from On Point Hospitality owners Travis Howard and Tim Wiggins, who announced news of the intimate event space last month. Connected to their much-loved restaurant Yellowbelly (4659 Lindell Boulevard, 314-499-1509), in the Central West End, the Hideout is designed for both private and public events, with Corpse Reviver being the first to debut in the space. The pop-up bar is, of course, named for the famous classic pre-Prohibition cocktail, corpse reviver, which earned the moniker because people often drank it to "revive" themselves from a hangover.

What other drinks may lack in fancy glassware they more than make up for with fun extra touches, like the Ghost Malone, with J. Rieger & Co. vodka, pineapple, coconut, almond, lime, ginger beer, “coco-caine” dust and a face tattoo. Yes, dear reader, you read that correctly: Every Ghost Malone cocktail comes with a spooky temporary tattoo. 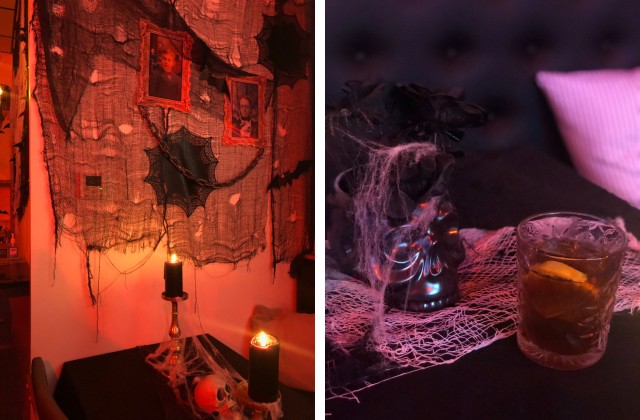 “It will be over-the-top," Wiggins said in a press release. "You’ve seen these pop-up bar experiences for other holidays, but we want to celebrate all things spooky and cool for the Halloween season.”

In addition to the ghoulish grog, customers can order the Yellowbelly pale ale, brewed by Rockwell Beer Co.; white or red wine; and two shots, the "blue pill" or "red pill." (In case you want to see how deep the rabbit hole goes.)

The cocktail list is the "tricks" portion of the menu, so of course there have to be a few "treats" featured as well. For Corpse Reviver, Yellowbelly pastry chef and baker MJ Stewart developed three small bites: pumpkin gooey butter cake, from-scratch sour gummy worms and Buckeye balls.

To complement the spellbinding decor, the space is cast in an orange and purple glow thanks to colored bulbs and a thin layer of fog emitting from a smoke machine. Two horror movies are projected on the walls — on our visit, it was Children of the Corn and Killer Klowns from Outer Space — and playlists with names like "Trap or Treat" and "Haunted Tiki" play in the background.

The fun runs from Thursday, October 17 until Saturday, November 2, from 6 p.m. to midnight, and $1 of every cocktail will be donated to the ACLU of Missouri. Seating for Corpse Reviver will be available on a first-come, first-served basis, with parties of six or more limited due to space restrictions.