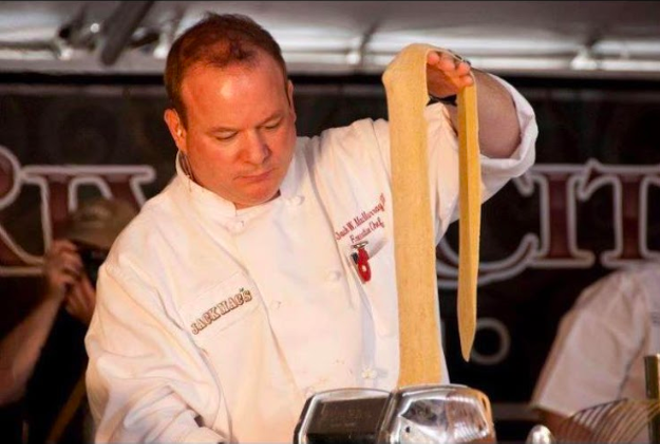 The eighth-annual World Food Championships (WFC) will return to Dallas, Texas from October 16 to 20 — and this year, a local chef will be among the many competitors.

More than 1,500 professional chefs from 40-plus states and 15 countries will go head to head at the competition, battling it out for high-stakes cash prizes, including St. Louis' very own Jack W. MacMurray III, executive chef of Boathouse Forest Park (6101 Government Drive, 314-366-1555).

Since being reconfigured by the Sugarfire Smoke House team in 2018, The Boathouse has reestablished itself as a St. Louis staple for dining and entertainment, with chef MacMurray leading the kitchen. MacMurray is best known for his twists on classic American dishes, such as his famed bacon-wrapped pork tenderloin at The Boathouse.

Naturally, at his first WFC competition, MacMurray will be competing in the bacon category at the competition's Ultimate Food Fight. He's well-suited to the task — last summer, MacMurray competed in at the World Food Championships' Show Me Series Battle Bacon on June 25 at the Boathouse, and his winning dishes impressed the judges enough to earn him a spot at WFC in Dallas.

"It's quite an honor to be able to participate alongside so many talented chefs at WFC," MacMurray said in a release. "I'm thrilled to be given the opportunity to take this challenge head on and show everyone what I can do."

To keep updated on MacMurray's progress in the competition, check The Boathouse's social media pages next Wednesday through Sunday.