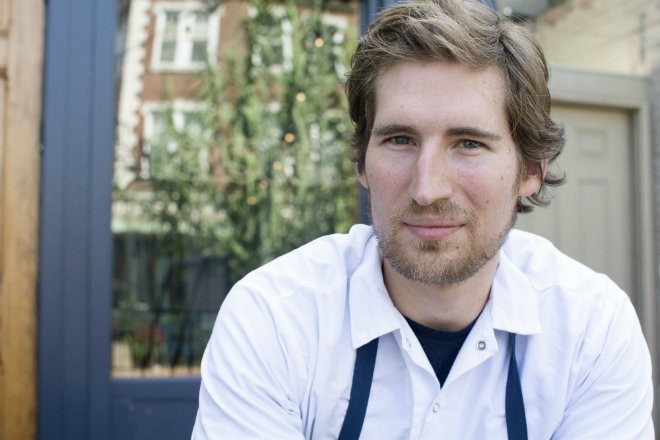 Matt Wynn recalls being utterly confused when the person on the phone from Tom Colicchio's Craftsteak Foxwoods asked him to bring a knife roll and chef whites to his internship. A business school student, he'd assumed he was going to be working in the front of the house at the swanky steakhouse, so he simply rolled with the requests and figured it would get settled once he arrived for work. And it did — just not the way he thought it would.

"I had absolutely no experience in the kitchen, but when I got there, I was greeted with a whole sink full of chicken backs to clean," Wynn recalls. "When the garde manger guy didn't show up, they yelled for me to go over there, and I didn't even know what garde manger was. About a month after hiring me, they realized that I never went to culinary school. All that time, they thought I'd just went to the worst culinary school ever."

Although a misunderstanding set off the chain of events that led him to his current role as executive chef at Taste (4584 Laclede Avenue, 314-361-1200), Wynn can't help but feel like he's exactly where he's meant to be — and on a path that, left to his own devices, he may never have ventured down. He'd always had a slight interest in food, but he never really cooked until he was a young adult, and even then, his culinary experience involved little more than throwing some spices into canned chili or seasoning steaks.

He'd worked a few restaurant jobs — a salad bar attendant gig at Ruby Tuesday, a serving position at Old Chicago — but nothing prepared Wynn for the intense education he'd get at Craftsteak. He describes the experience as nothing less than brutal, pushing him to his limits and driving him to wonder why he was even there. Still, he kept coming back.

"I got destroyed there," Wynn recalls. "During the internship, they were hitting with gloves. When I actually started, the gloves came off, and they started picking up bats. I remember thinking, 'This is awful. Why did I do this?'"

However challenging the experience was, something told Wynn to keep pushing forward and pursue cooking as a career. After Craftsteak, he decided to move to New York City, where he planned to stay for two years. He ended up staying for four, relishing his chance to learn in the city's high-pressure kitchens and soak up the city's culture. Eventually, though, he realized that the expense of living in the city was too much for him to create the life he wanted, so he returned home with the goal of finding a kitchen job in St. Louis.

Wynn first landed at the former Niche and worked at the acclaimed restaurant until it closed in 2016. After a stint at Basso, he took a three-week sabbatical that allowed him the headspace to question what he wanted his next move to be. Still figuring that out, he ended up at Mac's Local Eats for a short time before being faced with a decision that would determine what direction he wanted to take his career.

"I was offered a line cook position at Louie and the sous chef job at Good Fortune," Wynn recalls. "Louis is this great place, but I decided that I'd been doing Italian food all this time and wanted to branch out and do something different. It failed, and that's fine. There are certain techniques I learned there that made me better. The concept didn't pan out, but it made me a better cook. Sometimes, it's good to lose because you have to bring yourself back."

A few months before Good Fortune closed, Gerard Craft invited Wynn out for coffee to see if he would be interested in coming back to work for Niche Food Group, this time as executive chef at Taste. Though Wynn still felt emotionally attached to the team at Good Fortune, he knew Taste was the place he was meant to land. He accepted the offer and has never looked back.

"When I first came back to St. Louis, I was really missing how in New York you could walk to the subway at 4 a.m. and get pizza. Then I went to Taste after this dinner we were doing, and it was 11 p.m. and we were hanging out upstairs in this swanky lounge eating kimchi salad and bacon-fat cornbread and having cocktails. I was like, 'Hell yes. This is awesome.' When I got the [executive chef] offer, I realized this was the perfect job for me."

Having now led the kitchen at Taste for about a year, Wynn has been able to capture that metropolitan, late-night vibe he loved during his time in New York while embracing the pace and cost of living that comes with being in the Midwest. And he's also been able to bring everything he has learned over the years about running the back of the house to a kitchen he lovingly describes as a pirate ship.

"Taste is definitely not as formal of a kitchen as Niche was or Brasserie is," Wynn explains. "It's always been a bit of a pirate ship. And it still is, but it's a very tight-knit one — like if Baptists were running a pirate ship."

Wynn recently took a break from captaining his kitchen to share his thoughts on the St. Louis restaurant scene, the reason for his newfound daily ritual and why his dream destination would be free of truffle oil and Kid Rock.

What is one thing people don’t know about you that you wish they did?
Even though I’m fairly picky and tend to micromanage sometimes, I’m very much a big-picture guy. I think a good experience is like a Monet painting; lots of precise dots that take time and patience to place, but the end result is stellar.

What daily ritual is non-negotiable for you?
I’ll be honest, I hate rituals and I hate routines to the point where sometimes I’ll even take a different route to work. That being said, I just adopted my first dog, and her ritual involves me walking her every day. This is, of course, non-negotiable otherwise I have to bust out the Rug Doctor when I get home.

If you could have any superpower, what would it be?
Time travel. I’m a big history buff. I would love nothing more than to travel around to some of the world’s most important moments in humanity and see how everyone actually reacted. That and I want to solve the age-old question [of] if dinosaurs actually had fur or if they were exactly as reptilian as Steven Spielberg made them out to be.

What is the most positive thing in food, wine or cocktails that you’ve noticed in St. Louis over the past year?
The amount of diversity has been awesome. Italian cuisine is still predominant, but people are opening up to other cultures. Loryn and Edo Nalic of Balkan [Treat Box] are introducing people to Bosnian food and it’s all the rage now. Nick Bognar of Indo is reminding people that raw fish with careful Japanese preparation and delicate flavors is some of the most delicious food you can find. Melanie Meyer has used her passion for Korean street food to bring some of the most under-the-radar food in St. Louis to a local dive bar, the Silver Ballroom, and is crushing it. I’m also very excited to see what Tello Carreon will bring to the table with Alta Calle.

What is something missing in the local food, wine or cocktail scene that you’d like to see?
I guess the amount of late-night food for night owls such as myself. If there’s one thing I miss about living in New York City, it’s being able to go and get amazing yakitori or Korean barbecue with about ten other people from work, passing around dumplings and pitchers of Kirin Ichiban or Sapporo.

Who is your St. Louis food crush?
I’ve followed Matt Daughaday for a while; Reeds [American Table] was my first dining out experience in St. Louis, and I freaked out over how good everything was.

Who’s the one person to watch right now in the St. Louis dining scene?
There are tons of names to mention, but I’m going to name Michael Gallina for this one. I’m very interested to see what him and Tara [Gallina] are going to create over at Winslow’s Home. We’ve seen how well they source over at Vicia and how much integrity they harness in their product, but being able to take that Dan Barber aspect of farm-to-table and really getting to put it in motion at that space will truly give St. Louis a very unique experience.

Which ingredient is most representative of your personality?
Basil. It’s bold, but finicky. Very eclectic but sometimes doesn’t play well with others. Sometimes you have to mask its flavor a bit to calm it down.

If you weren’t working in the restaurant business, what would you be doing?
The real estate bug bit me pretty hard when I was house hunting — maybe something involving that. If not real estate, then maybe marketing.

Name an ingredient never allowed in your restaurant.
Truffle oil. I can’t stand the smell.

What is your after-work hangout?
I just bought my first house, so lately it’s been there. Hospitality is nice, it’s dog friendly, food is solid when the chef is feeling motivated and there’s always either sparkling water or Busch beer around. But if I’m not in a hurry to go home, it would be either Wildflower in the Central West End (Will Sinon, the bartender, was actually the one who sold me my house!) or iTap Central West End (which is also dog friendly!)

What’s your food or beverage guilty pleasure?
Frozen fried calamari with marinara sauce. I never tell people this, until they put it in front of me and realize I’m not sharing any with them.

What would be your last meal on Earth?
Last meal on Earth, as in I’m not dying, instead I’m leaving earth tomorrow and relocating to planet Gloria, where they’ve never heard of Kid Rock’s remake of "Sweet Home Alabama" and truffle oil is banned. What am I going to eat right before my Space Force shuttle departs Cape Berube? Raw yellowfin tuna prepared by Jiro Ono (or his son, Yoshikazu).