At UMSL, Triton Pantry is "Feeding Student Success" on Campus and Beyond 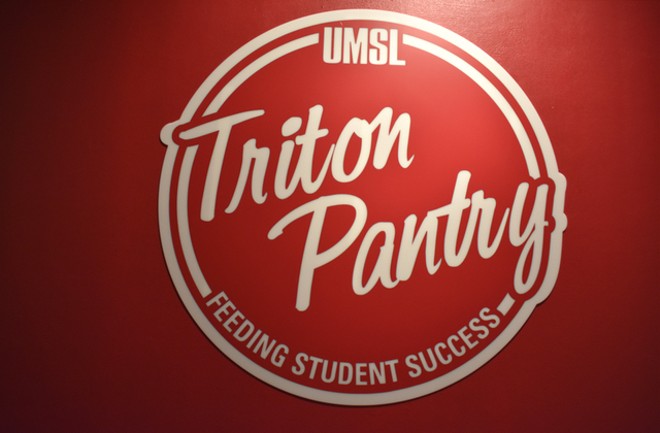 Almost a decade ago, a student visited the University of Missouri-St. Louis (UMSL) student affairs office with a heartbreaking request. At a recent food drive on campus, the student had taken some food for themselves out of extreme need, and now, they wanted to replace it.

"Student affairs didn't know what to do; they just knew that this student's need was an issue and they wanted to help students dealing with things like this," says Robin Kimberlin, associate director of UMSL Student Social Services.

At the time, Kimberlin was a student herself, studying for a masters of social work at UMSL. In order to help the student and other students dealing with food insecurity on campus, the school offered Kimberlin a part-time position with student affairs. After earning her masters, Kimberlin proposed that her part-time role be expanded into a social worker position on campus. "And it's just grown from there," she says.

Today, that growth has led to Triton Pantry, a food pantry on UMSL's main campus that opens twice a month for students to shop for fresh and shelf-stable foods as well as personal-care items. Kimberlin's role with the university has evolved in kind; as associate director of Student Social Services, her work now extends beyond student food insecurity initiatives, although the pantry remains a personal passion for her.

"It's my favorite thing to talk about," Kimberlin says with a smile. "I was able to have the autonomy and the space, and people having confidence in me to kind of build this office from the ground up. There's nothing more satisfying than helping people with their basic needs — it's that simple. And at a university, you're part of this bigger path."

Triton Pantry didn't open overnight, though. The first step Kimberlin's team took was assembling snack packs for students to grab on campus as well as trying to connect food-insecure students with local food pantries. What her team found, however, was that the typical hours of most food pantries didn't conform to the needs of students and their school and work schedules.

"Models of campus food pantries were popping up across the country, and we just decided, 'We need to do this. We know we don't have space; we're just going to pop it up where we need to,'" Kimberlin remembers. "We would go out and buy food, bring it in and pop it up in a building somewhere where students could come. Within about six months it went from serving around 20 students to like 100."

As Kimberlin and crew where staging these pop-ups around campus, UMSL was in the process of writing its strategic plan for the next three to five years. Recognizing the increased demand for food and pantry supplies, the university included funding for the project in that plan and identified space on campus for a permanent home for the pantry.

"It was kind of a perfect storm, because, at the same time, the awareness of food insecurity nationally just exploded," Kimberlin says. "All of these pieces just came together."

Around the same time, another piece came together: A student working in an UMSL call center placed a donor call to Lenora Gooden, who graduated from UMSL with a degree in sociology in 2010 and is the vice president of operations St. Louis Area Foodbank. Wanting to give back, Gooden was connected with someone in UMSL's development department who mentioned the Triton Pantry.

"And the rest is history," Gooden says. "She introduced me to Robin [Kimberlin] that same day. At the time she was doing the snack packs, which I was impressed by, and she mentioned that her vision was to have an actual pantry at the campus. They educated me about the need that was on campus, but when I was in school [at UMSL], I wasn't aware of that. It agitated me that I was walking on campus and in classes with people who were food insecure, because I could have done something to help them. I was now in a position to put those wheels in motion." 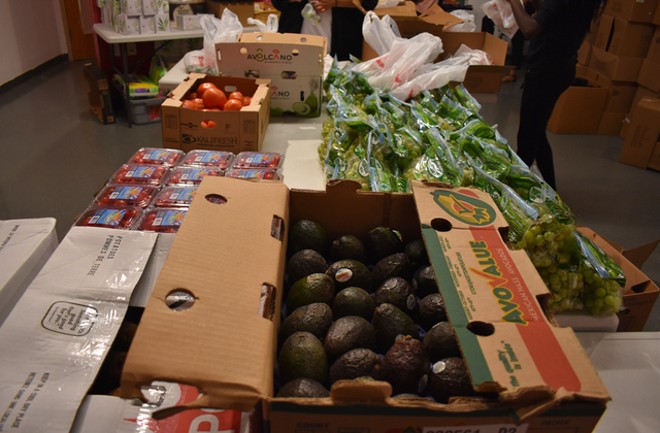 The opportunity came to Gooden at a transitional time for St. Louis Area Foodbank. For years, the organization had followed specific guidelines about partnering with other area pantries, including requirements that the pantries be 501(c)(3) nonprofits and that they are open to sharing products to those in need in the community, not specific or limited-access groups such as churches or schools.

"We consider UMSL a nontraditional [partner], because with our past guidelines, we wouldn't have been able to [work with the university]," Gooden says. "But along with food banks across the country, we were realizing that there's a lot of untapped potential to really meet people where they are. There are a lot of students on campuses across the country who are struggling with food insecurity, so [UMSL] was the perfect fit, because we were just starting down the road of [working with] a nontraditional pantry."

With St. Louis Area Foodbank's support, as well as donations from St. Ann-based grocery chain Save-A-Lot (including an industrial-grade freezer, two refrigerators and other items) Triton Pantry had not just the team and the space to thrive, but the resources and partnerships necessarily to grow.

In its current location, Triton Pantry ⁠— named for UMSL's mascot, Louie the Triton ⁠— operated its first full year of service during the 2017-2018 school year. Last spring, the pantry was officially celebrated in a dedication ceremony on campus, and for the 2019-2020 school year, it has expanded its hours from once a month to twice a month. During those two designated days per month, from 11 a..m to 6 p.m., the pantry is open for students to shop, although Kimberlin is quick to add that the pantry will open whenever possible for students in need. "If there's food in there and there's someone out here who needs it, we're going to open the door," Kimberlin says.

Located inside a former campus art gallery, Triton Pantry has been transformed by Kimberlin and her team. Stepping inside the pantry today, students are met with bright red walls and cheerful black-and-white illustrations bordering the top of the room. On days when the pantry is open, shelves are stocked to the brim with food and supplies, and music plays, just as it does at your neighborhood grocery store. 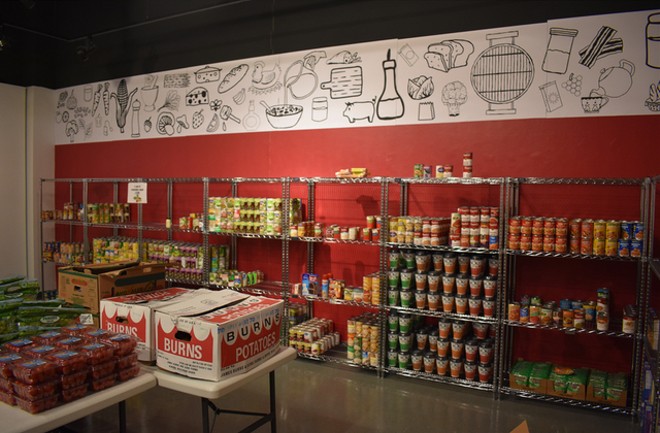 "To see the room and the way it used to look — and I saw it in its raw form — to what it is now, actually brought tears to my eyes, " Gooden says. "It's a lot of hard work and dedication that's gone into this on both ends."

Last year, Kimberlin averages that between 100 to 125 students visited the pantry monthly. At the first opening for the 2019 fall semester, more than 188 students shopped the pantry.

Access to groceries is offered on a first-come, first-served basis and students can line up before the 11 a.m. start time to shop for the broadest selection. The only eligibility requirement is a current UMSL student ID; Kimberlin says this self-identified need model was important to ensure that no student felt unwelcome. Students can preregister for the pantry openings online or in-person, which includes sharing their name and email address to receive updates and other notifications, but it is not required.

"I think that eligibility just isn't straightforward," Kimberlin says. "You might have pockets of students who have some really serious need — they're just really struggling all the time. And then you have students where it's the end of the month and they had to replace a tire and it threw off all of their bills and they don't know what to do. It just looks so different from student to student. Our average student age is 27, so we have a wide spectrum of people going to school here."

"My goal for this year is figuring out how to reach those students who maybe don't come to the student center regularly or their class or work schedule isn't allowing them to access it, or it just doesn't feel like it makes sense for them to use it," Kimberlin says. "We're in talks with St. Louis Area Diaper Bank to see if we can be an agency for them. When you're seeing around 300 students a month, obviously we know there's need in there for diapers." 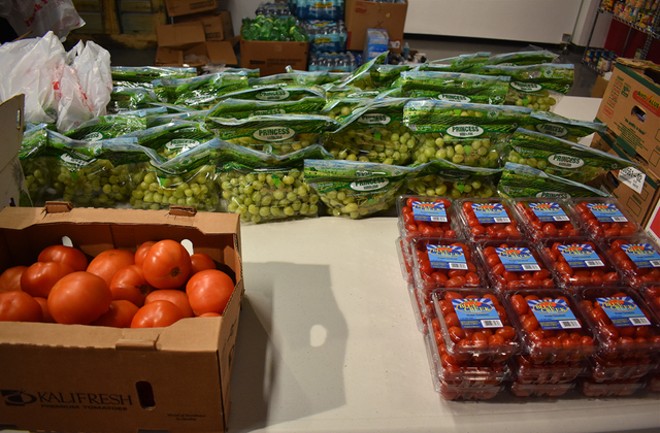 The pantry's success and impact has been noticed beyond campus, as well; Kimberlin says her department is in talks with other colleges and universities across the state of Missouri to help implement new campus pantries and act as a model for what services and resources can be offered elsewhere.

"We're really being utilized as the example for these other universities — the relationship between St. Louis Area Foodbank and a campus is huge, and the potential is huge," Kimberlin says. "I think [St. Louis Area Foodbank sees] it as that, too, because we have 10,000 people who come to this campus, and the possibility of those people to have need, the food bank can now access and be able to help them."
Moving forward, Kimberlin and the university are also looking for ways to expand the pantry's services to UMSL's South Campus, located just across Natural Bridge Road from the main campus. They're also working to identify need and resources for students at the College of Nursing, School of Social Work and beyond to ensure that all UMSL students have access to food and essentials no matter where or what they're studying.

"The university has provided unparalleled support for this, which is really exciting, and wonderful for us as social workers and for students," Kimberlin says. "No one's going to argue that kids don't need to eat to learn, and nothing changes for an eighteen-year-old in high school in May or an eighteen-year-old in college in September. It's no different for a 30-year-old returning to school. You have to have food so that your brain and body can work. And if our university is all about graduating students and making sure they go out and get jobs in their careers, their basic needs have to be met."