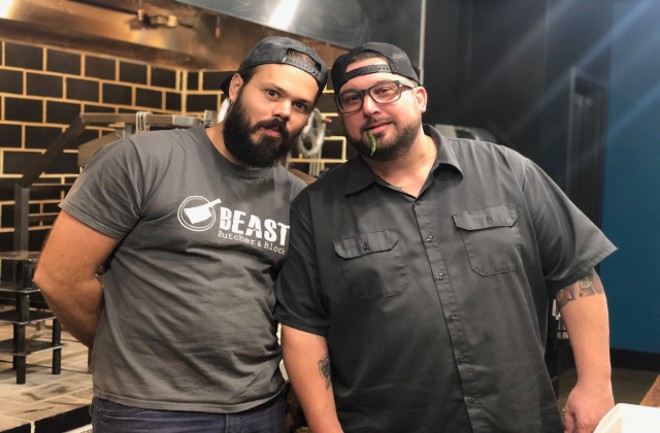 David Sandusky has had a busy few months.

The owner and pitmaster of BEAST Craft BBQ Co. (20 South Belt West, Belleville, Illinois; 618-257-9000) in Belleville, Illinois and the newly opened BEAST Butcher & Block (4156 Manchester Avenue, 314-944-6003) in the Grove now has another trick up his sleeve. On Friday, he'll debut the Skullery inside BEAST Butcher & Block, a 36-seat "fire-to-table" concept inside the restaurant.

To celebrate the Skullery's debut, BEAST Butcher & Block executive chef Ryan McDonald will be collaborating with longtime friend and Byrd & Barrel  (3422 South Jefferson Avenue, 314-875-9998) chef-owner Bob Brazell on a special dinner at 7:30 p.m. on Friday, October 4. The menu will be inspired by Brazell's travels throughout China, according to a press release.

“The Skullery is going to push barbecue way beyond the scope of what you may be used to,” Sandusky said in the release. “As the only fire-to-table restaurant in the city, we have a real opportunity to define and differentiate what we can create. It’s where we get to test and elevate the boundaries of what barbecue can be. No longer is American barbecue confined to four cuts and a smoke box.”

Tickets to the dinner are $100 per person – and for an additional $35, you an opt for cocktail pairings. BEAST Butcher & Block will also officially launch its nose-to-tail Sunday brunch service on Sunday, October 6. Head to BEAST's website to purchase your ticket and reserve a spot.

Keep an eye out for future chef collaborations at the Skullery, which Sandusky says will come to help define the dining experience there.

“We’ve got a long list of local chefs who we are excited to collaborate with in our one-of-a-kind dining room,” Sandusky said in the release. “It’s the perfect size to interact with guests while feeling just enough heat off the flame to appreciate fireside cooking.”