The St. Louis Cricket Challenge Has 50 Restaurants Bugging Out This Month 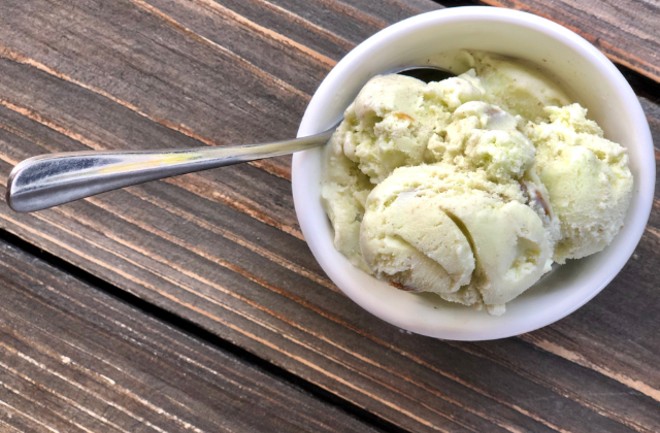 For the next 31 days, Sarah Schlafly is on a mission to get St. Louisans to eat crickets — specifically her Mighty Cricket pure cricket protein powder.

To be fair, as the chief executive officer of Mighty Cricket, it's always Schlafly's goal to increase awareness and consumption of cricket protein, but during the month of October, she's launched the St. Louis Cricket Challenge, a partnership with 50 local restaurants. For one month only, St. Louis diners can find dishes like pistachio ice cream at Rooster on South Grand (3150 South Grand Boulevard, 314-772-3447) and pizza crust at PW Pizza (2017 Chouteau Avenue, 314-241-7799) made with, you guessed it, cricket protein powder.

"We're kind of tying it into Halloween, but not really — it's more about conquering your fears with crickets, so we don't want to play up the scary bug thing," Schlafly says. "What we're trying to do with the challenge is really normalize it, so that when customers start seeing it in pizza, on top of frozen yogurt or in crêpes, it's just as another source of protein. It's not a one-off novelty buy or a scary thing, it's a powder that can be used to supplement all sorts of different foods."

Schlafly says the purpose of the challenge is threefold: "to put St. Louis on the map as an innovative city leading the nation's future of food, to normalize entomophagy [the practice of eating insects], and to measure the environmental impact St. Louisans made by replacing a conventional protein with this clean sources and then share this story with national audiences."

Although the environmental benefits of farming crickets for human consumption may seem obvious, Schlafly says that most consumers are currently more interested in the nutritional value of Mighty Cricket's products.

"Only about 15 percent of Americans right now make buying decisions based on sustainability, so we're really winning them over first on the nutrition side," Schlafly says. "Because crickets are such a lean protein source and they're so high in Vitamin B12, those are the two biggest selling points. Someone can get 100 percent of their daily Vitamin B12 in a serving of crickets, which is really cool; it's a really good energy food. And then they also have Omega 3 fatty acids, calcium and iron."

Currently, Schlafly partners with a few cricket farms around the world to source crickets for her protein powder, including farms in Canada and Thailand. She says that Mighty Cricket would ideally like to identify one partner farm to ensure consistent flavor and texture, but the company is still experimenting with price point, flavor profile and capacity. Eventually, she adds, Mighty Cricket would like to bring production home to St. Louis. "That's our ideal two years from now," she says.

And speaking of flavor and texture, Schlafly says those factors vary depending on the type of cricket used to make the powder. She adds that some chefs have described notes of sesame seeds, pistachio and other earthy flavor profiles.

"The texture is powder, and depending on the grind size, it can be from very fine, chalky powder to more of a coarse texture," Schlafly says. "The flavor profiles depend on what the crickets eat; we have a couple of different crickets that we're working with, and one tastes very mild and slightly nutty, and then the other has a stronger aroma that's also very nutty with notes of chocolate."

Schlafly says that several of the restaurants participating in the St. Louis Cricket Challenge have expressed interest in using the cricket powder in dishes beyond October, as well. For example, SymBowl (11215 Manchester Road, Kirkwood; 314-315-4421) in Kirkwood is already using the powder in its bottled sauces available for retail sale.

"We're hoping that a good number of the people who try it will actually go on to learn more on our website, read more articles about it and really dig deeper. The first step to really doing that, we think, is to sell them on it being delicious. The goal is to really drive people to try it the whole month as much as possible so that these venues are incentivized to keep [the dishes] on longer."

Mighty Cricket wants St. Louisans to share their experiences trying the cricket dishes, too: Diners who order one or more cricket dishes during the challenge are encouraged to share a photo or video of the menu item on social media with the hashtag #CricketChallenge for a chance to win a gift card to participating restaurants.

"That will incentivize St. Louisans to share this and really embrace this protein as a homegrown, St. Louis leader in this protein," Schlafly says.

If the St. Louis challenge is a success, Schlafly hopes to expand it into other cities, as well, with the hope of making the St. Louis-based company an example of the future of food across the country and the world.

For a full list of restaurants and venues participating in the St. Louis Cricket Challenge, visit www.mightycricket.co.