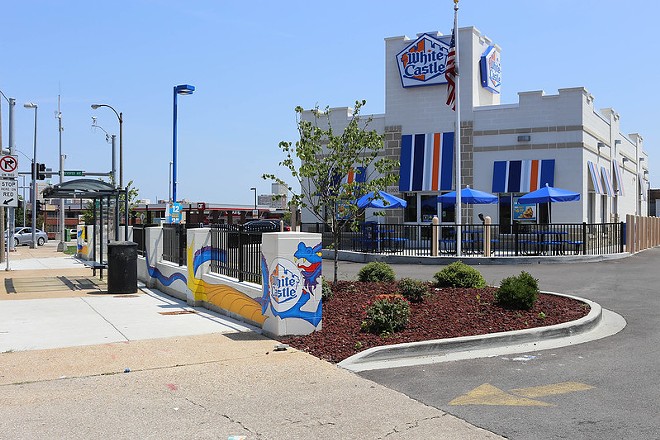 Most White Castle fans know that the only true way to enjoy the fast-food chain's burgers is after a long night of alcohol consumption, capping off an evening of horrible decision-making with a final blow absolutely assured to render the following morning an exercise in gastrointestinal distress.

It's unclear exactly why "blind drunk" is the ideal state of mind in which to shovel onion-based wads of meat and grease-soaked bun down one's gullet. It just is.

Milk and cookies. Chocolate and peanut butter. Fifteen Stags and an entire Crave Case consumed alone in a darkened parking lot, with a side of shame. Some culinary combinations are just timeless.

And it seems White Castle itself finally got the memo. The beer-industry site Brewbound reports that everyone's favorite medieval slider factory has teamed up with Pennsylvania’s Weyerbacher Brewing Company to launch a new brew just for White Castle customers, to be sold inside the restaurants.

The beer will reportedly be available in thirteen states and nearly 400 restaurants, and will even make its way into grocery stores where frozen White Castle burgers are sold.

“We did a pilot brew for them, a Kölsch that they loved, so that’s gonna be the first beer,” Weyerbacher Brewing Company chief operating officer Josh Lampe tells Brewbound. “It goes well with burgers.”

The name of said brew has yet to be released, but Food & Wine magazine notes that beer-rating app Untappd has entries for for two Weyerbacher beers piloted earlier this year with eyebrow-raising names: the Slider Beer debuted in May and the Crave Nation in August. Each has decent ratings in the app.

Food & Wine also reached out to White Castle Vice President Jamie Richardson, who confirmed that beer is in the works for the restaurant — as well as some other surprises he couldn't get into.

“As we prepare to celebrate our 100th birthday in 2021, we are in the midst of planning lots of fun initiatives and surprises,” Richardson said. “It’s too early for us to comment on any specifics about how widely available a White Castle-inspired beer might be in our restaurants, but we’re enjoying the creative process we’re working on right now in real time.”

It's unclear at this time whether White Castle plans to sell the beer in the St. Louis area — the specific markets that will be selling it have yet to be announced. But to be honest, they'd pretty much have to be plum crazy not to; St. Louis famously enjoys a drink or twelve from time to time, and one man even infamously stabbed a guy in the head back in 2013 when a White Castle employee told him he couldn't drink the beer he'd brought into the restaurant with him. It's safe to say we're primed and ready around these parts.

Notably, this won't be the first time a fast-food chain dips its toes into the beer game. Taco Bell and New York-based Brew Point Brewery released a beer dubbed Big City Bell Pilsner in December, which is sold at three locations in New York City. Seems like these restaurants whose consumption tends to hinge on the intoxication level of its patrons are finally getting hip to what the rest of us have known all along.

Your move, Jack in the Box.