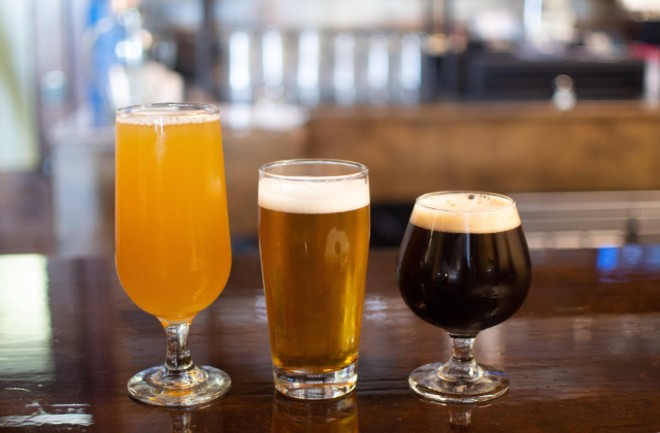 When we’re drinking: Any time of day is beer time

Located inside the brewery is the highly regarded burger counter, Mac's Local Eats (1821 Cherokee Street, 314-479-8155), which serves as the perfect complement to Bluewood's artisan ales. While the burgers are a popular draw, the brewery that houses them deserves more than just a nod with its impressive lineup of stouts, ales and everything in between.

Bluewood, which started back in 2015, was founded by a group of college buddies, Cameron Lund and Grant Lodholz, from the engineering school in Rolla, Missouri. What started as a hobby quickly became a passion for the accomplished homebrewers, and their beers soon attracted a cult following in the area. In a region known for its beer scene, Bluewood stands out from the pack with its signature stouts and high-ABV brews. Notably, Bluewood's Proprietor’s Fourth-Anniversary Stout won first place in the People's Choice category at Ales for Tails in 2017.


The long-awaited brick-and-mortar taproom is located in a beautifully restored building that dates back to 1821, encompassing roughly 2,000-square-feet, plus a beautiful patio with an outdoor bar. There is ample space upstairs for events — even a rooftop patio, which the owners have teased for upcoming event opportunities.

“We started looking for spaces about a year and a half ago, but as soon as we saw this building, it was a no-brainer that this was the future home of the brewery,” says co-founder and brewer Jerry Moberg.


Beer production is still limited but will be ramping up to full speed in the coming weeks. Bluewood currently offers more than ten house draft beers, from signature barrel-aged brews like the creamy, Cafe Noir Stout, to a variety of beers with a deceptively high ABV. In fact, the brewery offers beers up to 24 percent ABV (we'll try that one, please!), like Testify, a quadruple IPA, with notes of stone fruit, candied sugar, gold tequila and orange marmalade. On the lighter side, The Cherokee Standard Pilsner is an easy drinking Pilsner that's not too hoppy — and makes the perfect complement to one of Mac’s famous smashed burgers.


The beer that stood out most on my recent visit to Bluewood was the Arch City Haze, creamy New England-style IPA with natural hop flavors, offering more sweetness than the traditional bitterness of classic IPAs. Most New England-style IPAs lean heavily on late- and dry-hopping techniques; the Arch City Haze in particular delivers a slightly fruit forward experience.

For those of you looking for a gluten-free option, Bluewood offers Glutenberg Pale Ale and plans to offer ciders in the future.


Living in St. Louis means we are spoiled rotten with a wealth of great craft beer, and that’s not lost on the founders of Bluewood, who are excited to be a part of this storied beer city.

“The beer scene is top notch, with some of the best beer in the country coming out of St. Louis, and we are eager to share it with the community," Moberg says.

Head over to the edge of Benton Park for one of the cities best burgers and step out of your beer comfort zone to try one of their exciting artisan ales.