Although some American breweries won’t observe Oktoberfest until next month, true revelers know that those celebrations begin tomorrow across the pond. Yep, in Munich, Germany, Oktoberfest will be observed from Saturday, September 21 through Sunday, October 6. With plenty of German heritage and no shortage of craft breweries in St. Louis, there are enough Oktoberfest events happening locally in the next two weeks to ensure you needn't sober up until early October.

Events are listed in chronological order beginning Friday, September 20. Did we miss a local Oktoberfest event or festival? Tell us about it in the comments and we will update this post accordingly.

Where: Downtown Public Square (Main and Illinois streets, Belleville)
When: Friday, September 20 and Saturday, September 21 from 11 a.m. to 11 p.m.
Cost: Free to attend; cash encouraged for food-and-drink vendors
What to Expect: For the 39th year in a row, Belleville, Illinois is hosting its annual Oktoberfest celebration. Attendees can expect German-style eats, plenty of Oktoberfest beers, three stages featuring live music and entertainment and a children's area with rides and treats. The Saturday festivities will also include a wiener dog race and costume contest, plus a cornhole tournament and classic car show.

Where: Urban Chestnut Brewing Co.'s Midtown Brewery and Biergarten (3229 Washington Avenue, 314-222-0143) and The Big Top at Circus Flora in Grand Center (3401 Washington Boulevard, 314-827-3830)
When: Friday, September 27 from noon to midnight; Saturday, September 28 from 11 a.m. to midnight; and Sunday, September 29 from noon to 7 p.m.
Cost: Free to attend; cash encouraged for food-and-drink vendors
What to Expect: At Urban Chestnut Brewing Co.'s ninth-annual Oktoberfest celebration, guests will experience live rock, blues, polka and oompah-thumping music on two stages, plus live entertainment from members of Circus Flora. Souvenir one-liter glass steins will be available for $12 and one-liter fills will be sold for $12, with plenty of beers on offer including O-Katz Oktoberfest lager, Zwickel Bavarian lager and Schnickelfritz Bavarian

weissbier; sixteen-ounce pours will be available for $7 as well. Soak up all that beer with eats including pretzels, brats, pulled pork and caramel apples.

Where: Lewis and Clark Boathouse Parking Lot (off of 1050 South Riverside Drive, between the Missouri River and the Historic Downtown District; St. Charles)
When: Friday, September 27 from 4 to 11 p.m.; Saturday, September 28 from 10 a.m. to 11 p.m.; and Sunday, September 29 from 10 a.m. to 5 p.m.
Cost: Free to attend; cash encouraged for food-and-drink vendors
What to Expect: Hosted during the last weekend of September annually, Saint Charles Oktoberfest is a family-friendly festival with five entertainment tents serving 30-plus beer brands, German-inspired food and vendors, a children's area (with pumpkin painting, face painting, puppeteers, magicians and clowns), car show and special events throughout the weekend. Other happenings include a Wiener Dog Derby and The Glockenspiel, live cuckoo clock performers from Milwaukee.

Oktoberfest in Hermann, Missouri: October 5 to 27 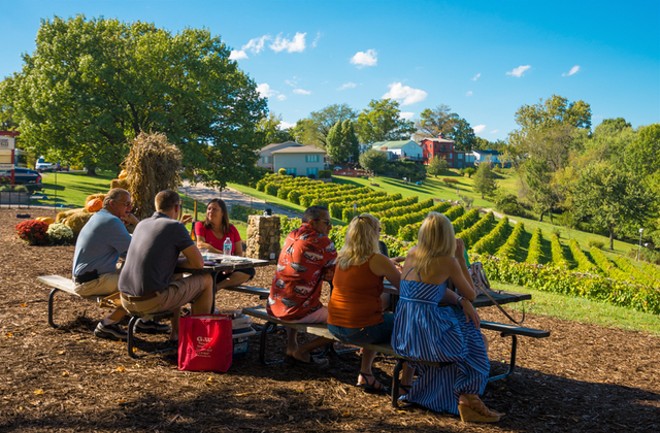 Where: Hermann, Missouri
When: Every weekend in October beginning Saturday, October 5 and ending Sunday, October 27
Cost: Varys from event to event throughout the month
What to Expect: Every weekend in October, Hermann, Missouri hosts its annual German-inspired Oktoberfest, hosting thousands of visitors at wineries, restaurants and businesses across town.

Where: Good News Brewing (2886 South MO 94 Defiance, Missouri; 314-608-2903)
When: Saturday, October 5 from 11 a.m. to 8 p.m. and Sunday, October 6 from 11 a.m. to 7 p.m.
Cost: Free admission; food and drink available for purchase.
What to Expect: During the first weekend of October, Good News Brewing Co. in Defiance, Missouri is hosting an Oktoberfest celebration. Guests will enjoy a Marzen and will have Oktoberfest steins, sausages and sauerkraut, wood-fired pizza, pretzels, German-style chocolate cupcakes and live music both days.

Saint Louis Zoo Zootoberfest: October 5 and 6 and October 12 and 13

Where: Saint Louis Zoo
When: October 5 and 6 and October 12 and 13, from 10 a.m. to 3 p.m.
Cost: Free for all ages, with food and drink available for purchase.
What to Expect: Bring the whole family to this Oktoberfest celebration at the Saint Louis Zoo, which includes live music, fall-themed kids' games and crafts and plenty of German-style beer for adults 21 and up (plus root beer for kiddos). An exclusive Zootoberfest beer stein will be available for purchase at the Lakeside Cafe and River Camp Cafe and comes with discounts on refills. To find festive beer tents, head to the Schnuck Family Plaza, the South Entrance Plaza, Carousel Plaza and at East Refreshments. Whether you're sipping Hefeweizen or root beer, pair your drink with German-inspired brats and pretzels.

Where: Soulard Farmers Market Park (730 Carroll Street)
When: Friday, October 11 from 4 to 11 p.m. and Saturday, October 12 from 11 a.m. to 10:30 p.m.
Cost: Free admission to the public festival; cash encouraged for food-and-drink vendors. Admission to the Bier Hall Tent is $20 per person.
What to Expect: Free and open to the public, Soulard's annual Oktoberfest celebration combines live music, German-inspired food, a wine garden and multiple beer stands where $10 steins of beer can be purchased. For $20, revelers can gain admission to the Bier Hall Tent in the upper park portion of the festival, which including a commemorative stein, premium restrooms, live entertainment and even more beer and food options for purchase.