Mac's Local Eats and Bluewood Brewing to Open on September 18 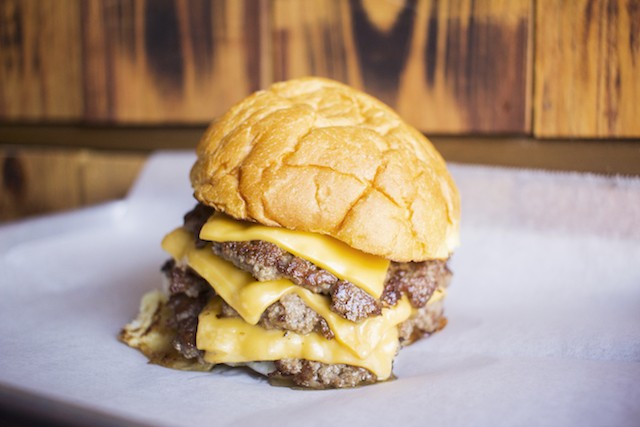 One of the best burgers in St. Louis is back — and you can now crush house craft beers along with them.

Now located inside the building that once housed the Lemp family's stables, the brewery and burger joint plans to make full use of the space's expansive footprint. When reached by phone this afternoon, Mac's chef-owner Chris McKenzie said he and his team are thrilled to be back in action.

"We're excited to make burgers and be done cleaning things," McKenzie jokes of the renovated location. "And we're excited to be able to bring St. Louisans into this building that's been here since 1885 — there's more character on this patio than in a lot of neighborhoods [in town] combined. We have a bigger kitchen, dining room, a lot more occupancy, a covered patio and better parking... I think the overall guest experience is going to be better than it was. With the volume that we do, we needed more space."

Fans of McKenzie's smashed burgers and #RipFries — flecked with Red Hot Riplets seasoning — can expect the same menu items from the original location, although the chef says he'd like to expand options in the future.

"Eventually we're going to add things to the menu, but out of the gate we're going to keep the same menu we had," McKenzie says. "We'll still do our seasonal produce specials, and we have some things in the works to share once we get into the swing of things in the new kitchen and get some services under our belts."

Mac's Local Buys, the retail market and sister business that McKenzie previously ran at Tamm, has also made the move to Cherokee Street.

"If you walk in the front door of the new building, you're in a foyer area, and on the backside of the steps there is where we put the market," McKenzie says. "It's got it's own room; it's really cool."