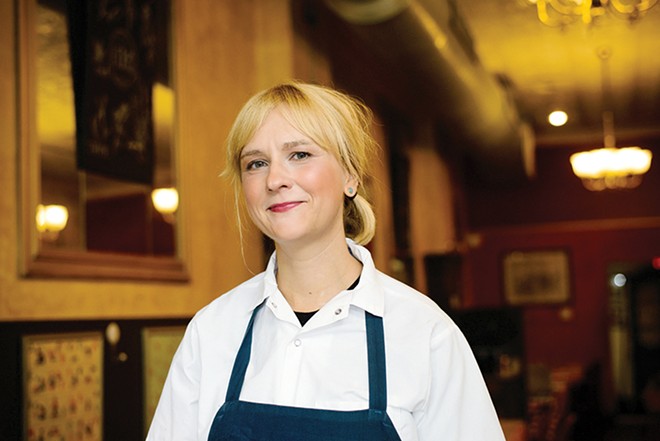 Elise Mensing grew up in a large household where family dinners were a big thing. She had a mother and father who cooked, loved to cook herself and passed her time watching cooking shows and reading Gourmet magazine. Still, when it came time to figure out what she wanted to do with her life, the kitchen wasn't her first path.

"I didn't arrive at cooking until after I graduated with a degree in art history," Mensing explains. "In college, I'd watch those shows about cooking around the world and read Food & Wine and Gourmet, but I just never thought I'd go to school for that. Jumping into cooking school was a huge change — something I didn't even think about until I was about 24."

Now pastry chef at Brasserie by Niche (4580 Laclede Avenue, 314-454-0600), there was a time when Mensing was better primed for the fine arts rather than the culinary ones. A student of art history, Mensing thought she would go in that direction for her career but changed her mind after she graduated and found herself at a crossroads. To get a gig in art history required graduate school, and she was not financially or mentally ready to take that leap. Something about academics turned her off, and she found herself wanting to get into a line of work that was more tactile.

"I really wanted to do something creative and hands-on," Mensing recalls. "I landed on cooking school because it was less scholarly and more tactile. Plus, the program I decided to do allowed me to move on to the next thing very quickly."

Mensing attended culinary school in Boulder, Colorado, and was afforded the life-changing opportunity to study in France. There, she staged in a bakery in the south of the country where she honed her skills and developed an appreciation for French pastry. Though she spoke French, there remained a language barrier between her and her employer. However, she transcended that by focusing on the process and outcomes of her efforts.

After France, Mensing returned to Colorado for approximately a year before moving back to St. Louis. Though she was still on the fence about pursuing the savory or the pastry side of the business, she knew she wanted to work at a restaurant that would offer opportunities to experience both.

She found that in Gerard Craft's Benton Park restaurant, Niche, which had opened six months prior to her return. There, she started out on garde manger, but eventually began to pick up pastry projects from Niche's pastry chef, Matthew Rice. Rice let Mensing try different things in the kitchen and eventually came to trust her enough to let her fill in for him on his days off work.

Mensing got the chance to do pastry full-time for Craft when he opened the adjacent bakery, Veruca Bakeshop. After it closed, Craft asked her to move over to his other restaurant, Brasserie, where she has been ever since.

Now in her fourteenth year with the company, Mensing can't help but reflect on the ways in which the city's dining scene has changed over the years. Though she admits it's difficult to enumerate all of the elements that have led to such a transformation, there is one aspect that stands out to her.

"St. Louis was very much a place where people just went to the places they went, and that was it," Mensing says. "Now, people are opening their eyes and are willing to explore more."

Mensing took a break from the kitchen to share her thoughts on the St. Louis restaurant scene, the unsung joy of simple vanilla and the benefits of being the baby of the family.

What is one thing people don’t know about you that you wish they did?
I’m the youngest of a big family. I’m not sure if you would guess that about me in a first meeting. I am not necessarily a typical youngest; I’m shy, reserved, but I was probably a bit spoiled and definitely a very lucky kid. All of my siblings are a bit older than me, so instead of fighting for my parents' attention I got the love of these great people who, in many ways, helped shape who I am today. And all of those family dinners and celebrations introduced me to my passion for how a meal can bring people together in magical ways.

What daily ritual is non-negotiable for you?
Breakfast. Coffee, some yogurt, mueslis. Nothing crazy, just enough to make me feel awake and human.

If you could have any superpower, what would it be?
Flying.

What is the most positive thing in food, wine or cocktails that you’ve noticed in St. Louis over the past year?
I think every year I see more and more locally owned restaurants, bakeries, coffee shops and craft beer spots opening up in the city. This is really inspiring to me. I grew up in the city in a time when a lot of these neighborhood businesses seemed to be disappearing, and now to see them reemerge and flourish is a great thing.

What is something missing in the local food, wine or cocktail scene that you’d like to see?
We do have a lot of great bakeries in the city — Pint Size, Knead Bakehouse, La Patisserie Choquette, to name a few — but having visited France a few times, I still pine for that European-style neighborhood where you could find a different patisserie or bakehouse around every corner. Maybe not a reality for St. Louis, but a girl can dream.

Who is your St. Louis food crush?
I have been doing this cooking thing for a little while now and can honestly say that each chef that I have worked with has taught me a little something new about food and how to love it. And so many of the chefs that have worked with Gerard [Craft] have gone on to do such great things too. I guess I have multiple crushes!

Who’s the one person to watch right now in the St. Louis dining scene?
One person! I can’t. But — call it bias if you like — I have to mention our front of house managers, Jen Masur and Justin Holley, both of whom make Brasserie such a great dining and work experience, and Alex Feldmeier, our chef, one of the smartest guys I know and a very talented cook. Also, Brian Moxey, at Sardella is another very talented cook and a super nice guy. Matt Wynn next door at Taste is a great cook and nice guy. And of course, there are all the pastry women I have worked with: Sarah Osborn, Summer Wright, Meaghan Coltrain. I also have to mention Sean Turner over at Louie. He's so talented. These are all people I know and have worked with and respect. That list is not short, and if I haven’t named someone here, it’s only because I am trying to keep it brief. I also know that the pool of very talented people within the city is not small, so keep exploring and trying out those newly opened places.

Which ingredient is most representative of your personality?
At the risk of sounding boring, vanilla. It's subtle, reliable, makes the sweet things sweeter and is maybe a little more complex once you get to know me.

If you weren’t working in the restaurant business, what would you be doing?
During my “quarter-life crisis,” when I chose to go into cooking, I also considered creative writing, art therapy, art restoration, some sort of museum work and, also briefly, teaching preschool. I guess one of those things.

Name an ingredient never allowed in your restaurant.
Anything pre-made. It’s all from scratch.

What is your after-work hangout?
Home. I am a creature of comfort.

What’s your food or beverage guilty pleasure?
Ice cream and a little chocolate never hurt anyone.

What would be your last meal on earth?
Every good dish I ever remember eating, from my mom’s homemade applesauce to the last dinner I ate at Louie, and sitting at the table with everyone I love, from this world and the next.