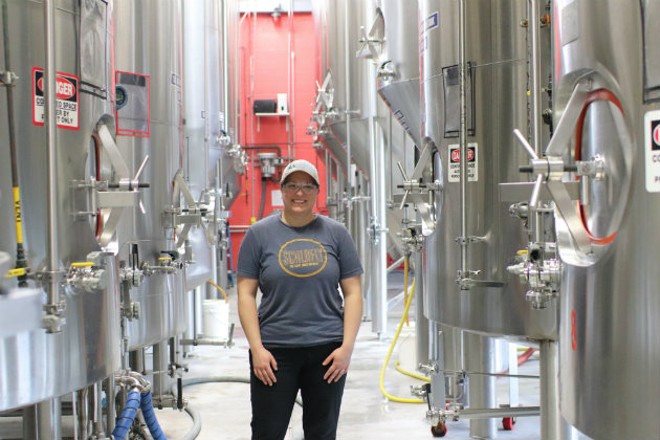 Unlike most teenagers, Emily Byrne was laser-focused on what she wanted to do with her life after high school. She enrolled in the food sciences program at Mizzou, went on to emphasize in viticulture and oenology after she completed her basic coursework and graduated to a job as a winemaker at Charleville Vineyard and Winery. And then she flipped the script.

"My first industry job was working out in the country — which is exactly what happens when you get a job at a vineyard," Byrne says. "But I realized pretty quickly that I am more of an urban person. The vineyard also had a brewery, and once I started learning about brewing, I realized I could continue my career and move back to St. Louis. And I also realized it's something I am passionate about."

Byrne traces her passion for brewing — and winemaking and food and beverage in general — back to her upbringing. Growing up, her parents would regularly take her on the Ste. Genevieve Wine Trail, and she would marvel at the beauty of the countryside. However, what struck her even more than that was listening to winemakers sit at bars and talk with such passion about their jobs. She knew she wanted to be a part of the industry in some form.

Byrne also realized at a young age that she loved science. As a kid, she especially enjoyed her biology classes which, once she got into wine and beer-making, she realized were directly applicable to fermentation. When she discovered brewing, she realized she could combine this passion with a more urban lifestyle, something that deeply appealed to her.

Brewing also spoke to Byrne on another important level. A self-described "high-energy" person, she realized winemaking is a slower-paced endeavor with a lot of downtime. Though she loved the processes, she found herself feeling restless during those slower periods.

"With winemaking, I'd say you aren't busy 100 percent of the year," Byrne explains. "You are very busy during harvest and getting stuff into barrels and tanks. But then there is a lot of 'hurry up and wait,' where you are really busy and then hit a wall. I love that beer keeps me busy all the time."

Working for Charleville made the transition from wine to beer easy because of its on-site brewery. Byrne's employers supported her move to that side of the business, and she reveled in the new gig. Once she was ready to move back to St. Louis, she got an internship at O'Fallon Brewery for six months before getting hired on as a brewer with Schlafly.

Now in her fourth year with the brewery, Byrne is not only thrilled to be living her passion but also thankful to be working for one of the industry's female trailblazers, Schlafly CEO Fran Caradonna. As a brewer in a traditionally male-dominated field, she appreciates the role that Caradonna has played in paving the way for women in the industry and hopes to pay that forward to other up-and-coming female brewers.

For now, though, Byrne is content to be doing what she loves in a gig that is the perfect fit — and one her prescient parents knew was right for her all along.

"I'm definitely an energetic person," Byrne laughs. "My parents have told me that it's not surprising that I ended up in this field. The know I have way too much energy to end up in a sedentary job."

Byrne took a break from the brewery to share her thoughts on the St. Louis food and beverage scene, her impressive knowledge of Parks and Recreation and the one thing she shares in common with the beer she makes.

What is one thing people don’t know about you that you wish they did?
I am a two-time reigning champ of Parks and Rec trivia nights.

What daily ritual is non-negotiable for you?
Morning coffee. I can’t function without it.

If you could have any superpower, what would it be?
Super strength. I’d love to have the power to lift kegs like they were pillows and never hurt my back.

What is the most positive thing in food, wine or cocktails that you’ve noticed in St. Louis over the past year?
More female presence! St. Louis now has its own chapter of The Pink Boots Society, a national beer organization which was created to help educate and encourage women to advance in their careers. Seeing the number of women coming to meetings and signing up to be members with our local chapter has really inspired me and made me excited for the future of St. Louis craft beer.

What is something missing in the local food, wine or cocktail scene that you’d like to see?
Troy Bedik. If someone can bring her back to me that would be great.

Who is your St. Louis beverage industry crush?
Kenny Franklin, Head Distiller at Square One.

Who’s the one person to watch right now in the St. Louis beer scene?
Alec Clifton, brewer at Schlafly. He’s been with the company for two years now, and watching him grow and become a leader has been amazing. He’s come up with some great beer ideas, and I can’t wait to see what he does over the next few years.

Which ingredient is most representative of your personality?
Brewer’s yeast. It’s bubbly and makes alcohol.

If you weren’t working in the beer business, what would you be doing?
Working at an animal shelter.

What is your after work hangout?
My balcony. I’m pretty sure it’s the best bar in St. Louis.

What would be your last meal on earth?
Risotto and a bottle of Sauvignon Blanc.