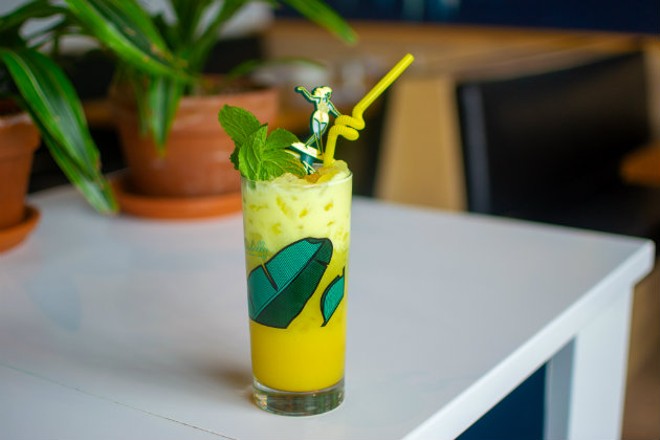 If you’ve ever been to Yellowbelly (4659 Lindell, 499-1509) in the Central West End, you know it's cocktail game is on point. Regardless of the time of year, Yellowbelly’s rum-forward cocktails transport you to coastal destinations by way of perfectly mixed concoctions in a light and airy space. Co-owner Tim Wiggins is the mastermind behind the bar and a walking encyclopedia on all things rum. In fact, the entire bar program is designed around rum, which, as Wiggins explains, is a very misunderstood spirit.

“People have a misconception that all rum drinks are sugary," says Wiggins. "It’s a very overlooked spirit and has yet to be fully explored.”

Indeed, most people’s experience with the sugarcane liquor begins and ends with rum and Coke or the occasional piña colada enjoyed on vacation. Wiggins feels that rum is on the verge of having its moment, and at Yellowbelly, he has created a variety of drinkable and balanced (read: not too sweet) cocktails.

The namesake cocktail, "the Yellowbelly," is perhaps Wiggins’ greatest creation on the menu. The recipe, which took him almost eight months of tweaking, is a mix of sweet, sour, and spice — not a sickly saccharine stereotype. The visually-appealing drink is made with a blend of Spanish rum, Jamaican rum and a locally made rum from Franklin County called Duckett Gold. The rest of the drink consists of a housemade coconut cream syrup that's infused with locally made Big Heart Tea Co. “Cup of Sunshine” dust, freshly pressed pineapple juice, lime juice and ginger—the latter designed to cut through the sweetness. It's served in a tall glass with crushed ice and finished off with a dusting of nutmeg and mint. The flavor immediately reminds you of drinking a more complex, less heavy piña colada.

“The goal was to reverse-engineer the piña colada,” says Wiggins, and the result is just that.

It’s no surprise that "the Yellowbelly" is the best selling cocktail on the list, but if that's not your thing, Wiggins is more than happy to change your mind about rum-forward cocktails. Bending his ear about rum can leave your eyes glazed over. His knowledge and passion are evident, from his understanding of the history of the spirit to his painstaking recipes that blend savory and sweet, oftentimes incorporating vegetables. Sitting at the bar and chatting about his cocktails is a treat for any connoisseur, or for anyone on the quest for the perfect drink. Wiggins was recently named a St. Louis Business Journal “30 under 30,” and after one conversation, it's easy to see why he’s so deserving of the award. St. Louis is lucky to have such a knowledgeable and talented mixologist in the region.

"The Yellowbelly" is an ideal way to enjoy all the beauty a rum-based cocktail can be and see Wiggins in his element. However, if you are really interested in exploring the spirit, the restaurant and bar are now offering rum flights—similar to a whiskey or tequila tasting. Either way, prepare to leave Yellowbelly with a newfound respect for rum and the non-sweet variety of rum-based cocktails.