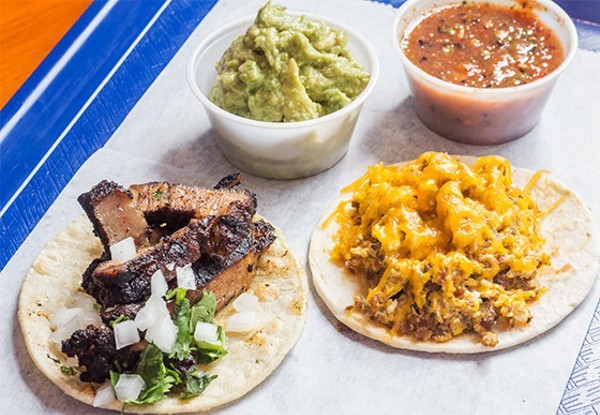 Christian Ethridge gets right to the point when he talks about the new Taco Circus (4940 Southwest Avenue, 314-899-0061) location that will open soon in Southwest Garden: It's going to be epic.

"We're adding an element of liveliness, culture and nightlife into this comfort food experience," Ethridge explains. "Our original place was utilitarian, but now, we have a place where people can relax in huge groups and have a fuller experience. This is still about food, but it's also about being able to have laughs with a bunch of people."

Since Ethridge announced the closure of Taco Circus' wildly popular original restaurant in Bevo Mill this past April, anticipation has been building for its forthcoming location. The new and expanded digs will occupy the former home of Three Flags Tavern, which closed in March of 2017 after a well-received three-year run.

Now, there is even more reason to get excited. Ethridge recently announced that he has added Cesar Correa and Eric Inthaluexay to the Taco Circus team; Correa will serve as head chef and chef de cuisine, and Inthaluexay will co-manage the brand-new bar program alongside Casey Colgan, who is also part owner of Parlor and Takashima Records.

Correa and Inthaluexay show how serious Ethridge is about transforming Taco Circus from a humble — albeit outstanding — fast-food style operation to a bonafide dining and nightlife destination. Correra is a longtime kitchen veteran who, most recently, served as a lead line cook at the Botanical Heights hotspot Nixta.

"Cesar has a lot of fine-dining experience, and him understanding this food — his food — is important to me," Ethridge explains. "We're using classic techniques and applying them to comfort food to make sure we are executing to be the standard-bearers of this type of cuisine. Having such a skilled chef who is also Latino and can bring his own regional cuisine to our style of Tex-Mex is great."

Ethridge is also excited about bringing on Inthaluexay, a talented bartender whose resume includes Atomic Cowboy and Nixta, to help carry out his vision of a cantina-style experience.

"The old place closed when the sun went down," Ethridge explains. "When we opened, we had originally planned on getting our liquor license and making the place a nice cantina, but the tables were so small, and people could only come in one or two at a time. Now, we have the room to very much be that cantina with everything from lunch drinking to late-night happy hours."

As Ethridge explains, these new hires and the overall expanded Taco Circus concept are finally bringing to life the big plans he's had for Taco Circus all along. After enjoying initial success in Bevo, he'd been thinking about the best way to take the concept to the next level, and he got that opportunity when he was approached Sean Baltzell of the Grove arcade and bar, Parlor. Baltzell was looking for someone to assist him in creating a new vision for the former Three Flags space, and after talking to Ethridge, he knew Taco Circus was the right fit.

Though no opening date has been released, Ethridge insists he and his crew are working hard to get the doors open as soon as possible. However long that takes, he insists it will be worth the wait.

"We intend on being that place where people bring people from out of town to show them that we have top-notch Mexican food and a great late-night experience here in St. Louis," Ethridge says. "If we execute all of those things as we envision, it's going to be great."

Correction: An earlier version of this post referred to Cesar Correra as a former executive chef at Nixta. He was a lead line cook. We regret the error.