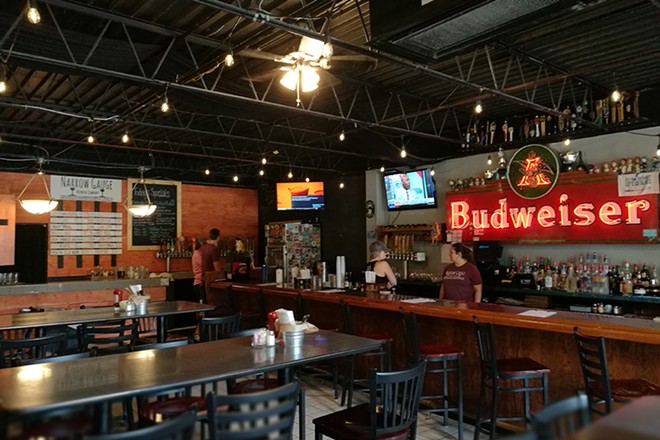 If an industrial stretch of Highway 67 in Florissant seems like an unusual place for a tap room, Narrow Gauge Brewing Company (1595 North Highway 67, Florissant; 314-831-3222) has an even more unusual set up than that. The three-year-old brewery is actually located in the basement beneath an Italian restaurant. And so if you want to sample its wares, you have to drink at the bar at Cugino’s.

Fortunately, that’s not a bad thing. Although the bar/restaurant space is technically Cugino’s, Narrow Gauge’s presence is smoothly integrated. Both the building’s exterior and interior feature Narrow Gauge’s branding prominently alongside Cugino’s. Essentially, if you’re there mainly to drink Narrow Gauge’s beers, you’ll feel like you’re in Narrow Gauge territory, and vice versa — if you’re there for an Italian meal, you’ll focus more on that than on craft beer.

Cugino’s is divided into two rooms, so when you walk in, take the door to the left — the smaller space to the right is more for formal dining. The room to the left is casual and open plan, with a long, L-shaped bar. High tables help to create a casual vibe, too; there’s no awkward feeling that you’re sitting down in a restaurant just to have a pint. A list at the back of the room displays Narrow Gauge’s current range. Around ten Narrow Gauge beers are on tap, in addition to a large selection of drafts from other local and national breweries.

Jeff Hardesty, founder and head brewer of Narrow Gauge Brewing Company, admits the arrangement sometimes causes confusion, but as a customer you have the sense of restaurant and brewery comfortably cohabitating. And Cugino’s food certainly provides the perfect foil for Narrow Gauge’s brews. It’s nominally an Italian restaurant, but the menu also features creative burgers made with half-pound patties, hearty sandwiches and pub-style appetizers including its signature breaded wings. First timers should try the PB&JJ burger ($12), topped with salted chipotle peanut butter and jalapeño-blackberry jam, alongside Swiss cheese and bacon. Trust us, it’s outstanding.

As are the beers. Narrow Gauge was the first St. Louis brewery to specialize in New England IPAs, with the hazy style dominating Hardesty’s beer lists in the early days. During the brewery’s soft opening, Hardesty says he wondered whether customers would be bewildered by Narrow Gauge’s distinctive flavor profiles. “I remember looking around and seeing everybody’s glass and thinking, ‘What is everybody thinking right now? They’re probably thinking we can’t brew beer because it looks extremely different than anything else,’” Hardesty recalls. “It was a little worrisome at first, but I realized pretty quick off that we started a fire that was going to be hard to put out.”

The brewery started with a three-barrel system and two fermenters, but demand almost immediately outpaced capacity. “Within a month and a half, we purchased another four fermenters,” Hardesty says. He expanded the brewing operation in 2017, adding four foeders and a canning line. Narrow Gauge doesn’t distribute at present, but you can pick up cans, along with growlers and crowlers, from the to-go window just inside the entrance.

Hardesty gradually realized he wanted the brewery’s output to offer a more diverse range of flavor profiles, so today you’re as likely to be drinking a Narrow Gauge pilsner or kellerbier as one of those trademark cloudy IPAs. Sour IPAs are among the styles Hardesty is excited to keep experimenting with. “They’re super fun beers to make. Very culinary based, so we try to pair fruits with spices, or try to be dessert-inspired,” he says. Work through that variety of flavors with seven-ounce pours starting from $3 and larger pours from $5.

Many of Narrow Gauge’s customers drive to Florissant from further afield, which is a source of pride for Hardesty, who has lived in the area for twelve years. “I love having people come up here and seeing Florissant and realizing it’s not what they maybe think it was. It gets a little bit of a bad rap around the city, but I like to think that we’re helping change that viewpoint,” he says. Hardesty also enjoys seeing Narrow Gauge pick up fans among locals who have been regulars at Cugino’s for years; they’ve helped to drive the brewery to introduce more sessionable lagers to its roster.

With the brewery’s capacity maxed out — at this stage, almost every inch of the basement is given over to equipment and storage — Hardesty is weighing possible new directions. That could mean opening a new, larger space, whether locally or in the city. But even if a move happens, Hardesty said Narrow Gauge won’t forget where it started. “We’d still try to have more exclusive beer up here,” he says. “We’ll always want to have some sort of presence here.”