Mimi’s Subway Bar Might Be the Most Bizarre, and Amazing, Bar in St. Louis 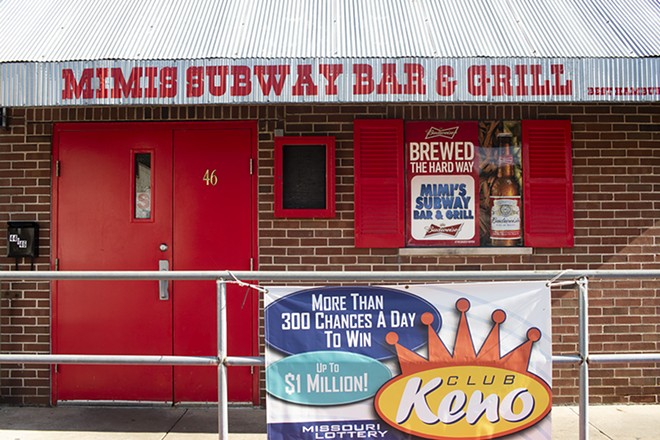 Seventy-five years ago, Jason’s Pharmacy was built just off North Florissant Road with some rather unique specifications: a squat, nearly windowless building with sixteen-inch-thick walls of solid concrete. The idea was apparently to deter would-be burglars. Suggesting a certain kind of paranoia, the building also had an underground fallout shelter.

To the Lehmuth family, which was looking for a new place to open a bar, the shelter seemed like a gross underutilization. They converted the space into the Subway Bar, which they ran underneath the pharmacy for 50 years, earning a reputation as one of Ferguson’s most distinctive watering holes.

When the Lehmuths decided to retire, they sold the bar to a man named Jimmy who eventually sold it to the current owner Mimi Fowler. Fowler had been a longtime regular of the bar and, after honing her bartending and hospitality chops at the St. Louis Airport Mariott for seventeen years, was ready to strike out on her own. She christened the spot Mimi’s Subway Bar & Grill (46 North Florissant Road, Ferguson; 314-524-6009), cleaned up the kitchen and created a food menu. Now serving what many locals consider the best pizza in Ferguson, Fowler draws in customers for food as much as the icy Bud Light.

What she did not change, however, is the overall character — Mimi’s is a strange and wondrous place, and so unique that it’s easily in the conversation as the best dive bar in the entire metro area.

The environs are a huge part of the fascination. The pharmacy that used to operate in the above-ground portion of the building closed a little over a decade ago, and now that it’s boarded up, it gives the feeling of an abandoned locksmith kiosk. If you’re a first-timer, the shuttered look will make you wonder if you’re in the wrong spot — a feeling that stays with you even as you push open the metal doors and find the sort of staircase you’d find in an old high school gym.

Should you get past these initial impressions, head downstairs and push open the second set of metal doors, you’ll be shocked by what you see: a stunningly large, open room with a vintage wooden bar on one side and a huge seating area on the other — both packed with regulars of all ages. There are the typical bar staples — a jukebox, some darts, the usual neon bar sign décor — but what makes Mimi’s so special are not the adornments to the space but the space itself. It’s the sort of bar you say you’re going to go to for one drink after work but end up staying until close, stuffing your face with onion rings and singing along to Motley Crüe. That’s the danger of being in a room that’s so far removed from the goings-on above ground; time tends to pass at a different rate. In fact, the place feels so sealed-off from the world that Fowler still has customers who come in during bad weather seeking shelter from the storm. Not that you have to wait for the tornado sirens. Mimi’s provides all the respite from the real world you need, in any kind of weather.