Kopp’s Korner Is Always a Good Idea When in Alton 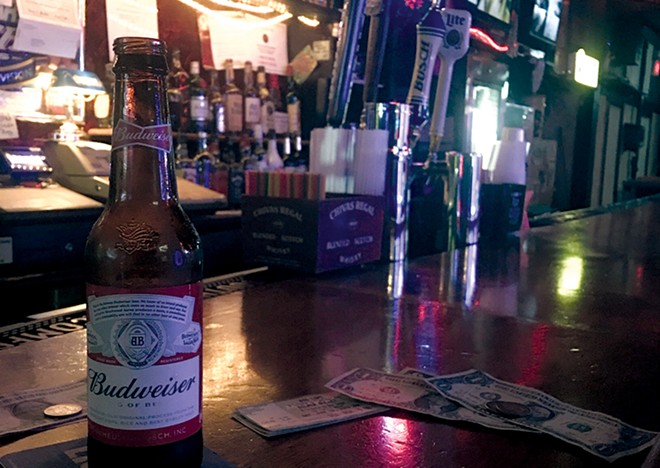 For people who’ve gone to Kopp’s Korner (838 East Seventh Street, Alton, Illinois; 618-465-9833) for years, the thrill is probably long gone, but for newbies, the old “ring a bell and we’ll decide if we’ll let you in” system is, yes, a little bit of a kick. Another wrinkle comes with it: To save yourself the trouble of the buzzer, you can buy a key for $5, giving you a lifetime membership in the club. Though you can’t come in and help yourself to a bottle of Bud when the place is closed, there’s not a lot of worry about that anyway, since the bar’s open pretty much all day long. It starts serving at 9 a.m. and keeps the drinks coming until at least midnight, dependent on crowd.

Kopp’s decor is that of a classic dive bar, which you’ll probably realize the second you drive up and spot the neon Busch sign illuminating the corner. Inside, you’ll spy a whole lot of racing signage and a bank of video machines along one wall. Some folks park there, sip at sodas and never leave. Others might hanker for a smoke; they’re sent outside, where a cool, clubhouse-like set up is just a couple of steps and a closed door away. Unlike other bars in the vicinity that flaunt Illinois’ no-smoking rule, Kopp’s plays it true and the air inside is breathable as a result.

As bars go, this isn’t a place to get fancy with a drink order. You’ll probably wanna order a domestic longneck and a shot, the basics. They’ll be served to you by one of three bartenders who work marathon shifts, the trio soaking up all the bar’s many open hours.

Running down a list of the bar’s faves, Shanna Lawson, on duty during a recent weeknight, mentions Bud Light and Coors Light, Jack Daniels and Jim Beam, Malibu and Jaeger Bombs. Interestingly, a Three Olives Vodka called Loopy also has fans. Also interesting: Kopp’s might be the only bar in America still specializing in Buttery Nipples.

Pointing over to the corner of the room, she notes that a relative, bartender Ashley Green, is also in-house. Given a few dollars for the jukebox, Green sings along to some tracks; it must be said, she’s quite good. The vibe before this moment had been pretty calm, a reality police show quietly playing on the TVs, a few drinkers drifting between the bar and the smoking deck. Suddenly, the vocals give the joint a little bit of life.

“We act crazy, laugh, entertain,” says Lawson. “Customers come from the bars on Broadway, then bounce and come here, or vice versa. We’re having a good time here, laughing, joking, making you feel like family.” You don’t even have to buy the key to get that impression. But it sure doesn’t hurt.