In a Baseball Town, Amsterdam Has the Beautiful Game Covered 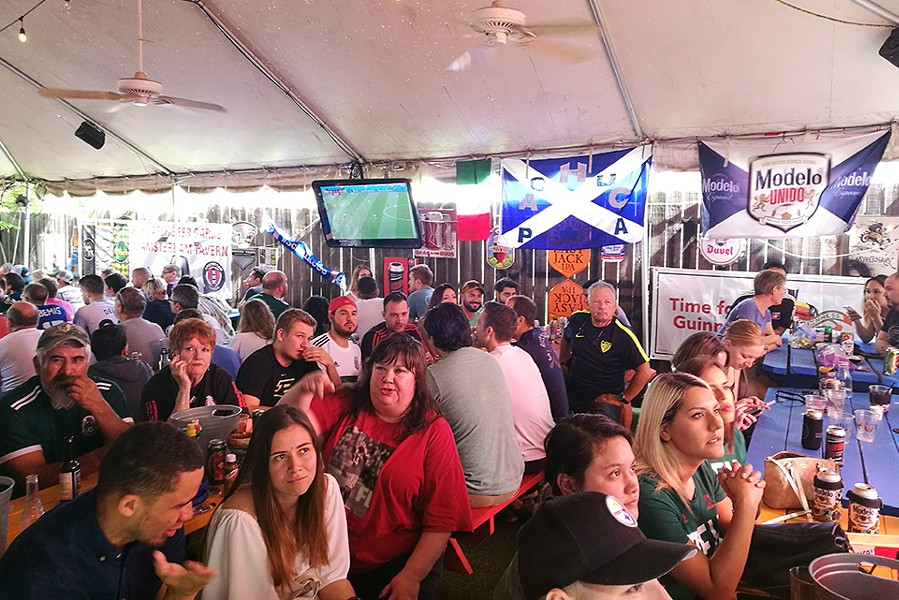 Every weekend morning from early August to late May, an occasional cheer will shatter the 7 a.m. silence of Tower Grove South. The source of the hubbub is Amsterdam Tavern (3175 Morganford Road, 314-772-8224), and it’s where soccer fans make a weekly pilgrimage to watch matches broadcast from England, Germany, Spain and wherever else the Beautiful Game is played.

Soccer has deep roots in St. Louis, but you have to spend a Saturday morning at Amsterdam Tavern to grasp the passion that the sport inspires in the city today. At Amsterdam, even when the Cardinals make the playoffs, a soccer game will always take precedence. And the bar attracts throngs. “They have nowhere else to go,” says co-founder Jeff Lyell of the bar’s soccer fans. “They’re just happy to have a place to watch the game and not have to worry about baseball being on.”

Lyell confesses he “wasn’t the soccer guy,” when he opened the bar with brothers Matt and Rob Stelzer in September 2008. At first, he didn’t realize there was an audience waiting for a bar that put soccer fans first. “Ten years ago, if you went into some sports bar and said, ‘Will you put this match on for me?’ you would never get the volume,” Lyell says. “Most of the time they’d laugh at you and put you at the little twelve-inch TV. ‘You want to watch Chelsea versus who?’ Soccer fans hate that.”

Amsterdam Tavern was the first modern St. Louis bar to speak to soccer fans in a language they understood, and the response was immediate. “I couldn’t believe the way that soccer fans started showing up,” Lyell says. “I’d get in on Saturday and Sunday mornings, and we’d be wall to wall with people, at 7:30 in the morning.”

Whoever’s playing, you’ll see fans decked out in their club’s colors enjoying a pint. Almost everyone has a beer, no matter how early the game starts. There’s always a good range of local craft beers on tap — the bar has collaborated with breweries including Urban Chestnut and Civil Life on soccer-themed beers — as well as session lagers for just a few dollars. Counter-service sister venue the Dam offers burgers, hot dogs and appetizers, which you can bring into the bar.

The crowd leans younger and male, but Amsterdam Tavern’s fan base is diverse in every respect. For those of us from other countries, it’s a place to meet, slip into our natural dialects and slang and tap into the routines of a Saturday back home (even if the time zone forces the scheduling forward by a few hours). Fans of different clubs enjoy a bit of friendly rivalry, but there’s no trouble or animosity.

For Lyell, the gesture of simply being open goes a long way. “You have to be open for those two people that show up for Watford playing against Bournemouth,” he says. “You make no money — doesn’t matter. You have to be open. Soccer fans see that you’re serious.”

That dedication has lured patrons not just from within the city, but from far beyond the metro area. “We have people that drive 80 miles each way on the weekend because they know you’re going to have 50 to 100 people that like to do the same thing that you do,” Lyell says. “Sit, watch and talk football.”

If you want to watch a more obscure game outside of the big leagues, just ask— staffers will do what they can to find a channel showing the match. Lyell says it’s vital for staff to be soccer fans themselves. “You can’t work during soccer if you don’t know about it,” he says. “They’ll sniff you out a mile away.”

If Amsterdam Tavern feels so comfortable, it’s probably because the customers have left their mark on the bar over the years. “Everything you see was given to us,” Lyell says. “People bring in scarves, they bring in soccer kits.” The beer garden grew organically as the place filled up, and another expansion is on the horizon. Lyell and his partners recently acquired the building next door to Amsterdam Tavern, and though they haven’t decided what to do with the space, Lyell says “we’ll definitely rip the fence down to expand the beer garden a little more.”

Even with the added space, the bar and beer garden regularly reach capacity, especially for matches between England’s biggest clubs. For the really big games, like the 2018 World Cup Final, Amsterdam will close Morganford down and broadcast the game on a huge screen in the street.

With a new MLS headed to St. Louis, you know where we’ll be watching.