At the Haunt, Horror Comes to a Dive Bar Setting 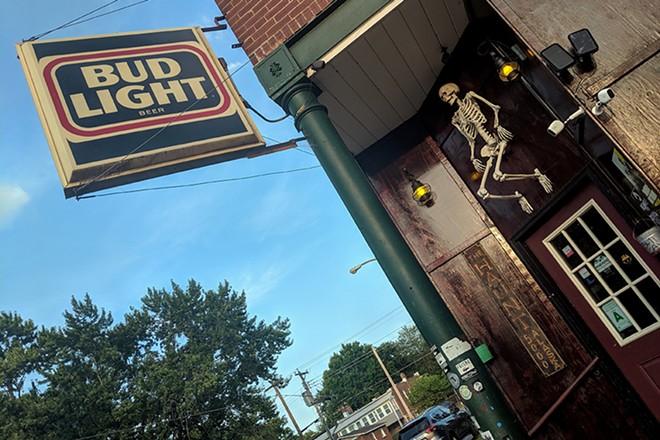 In a lot of ways the Haunt (5000 Alaska Avenue, 314-481-5003) is just like any other neighborhood bar in south city. The lighting is dim, the drinks are cheap and the jukebox is loud. You could almost walk right past the unassuming brick building in Dutchtown ... the one with a skeleton tethered above the door.

So, yes, there are a few different things about the Haunt. There’s history here. The long bar top is lit by the blue-tinted glass of two antique Busch lamps. They hang from the ceiling right next to a mannequin bound in a straitjacket, its mouth stretched in a hideous scream. The walls are lined with skulls, and the animal ones are real, though owner Chuck Foster admits that he still hasn’t found room for all the various craniums he’s been gifted over the years. The regulars keep giving him stuff, Foster explains. The hunters give him skulls.

Others give him dolls, which Foster then sends to local artists to decorate — that is, to mutilate into something suitably macabre. What started as an “all-year Halloween” gimmick became a sort of marriage between a low-key neighborhood bar and the completely macabre. While its decorations rival even Blueberry Hill in terms of knickknack density, the bar is resolutely what it is — a dive bar.

It’s a place where you can see a bartender leap clear over a table to separate two ornery customers spoiling for a fight during the lull in the second period of a Blues playoff game. It’s a place where credit cards have only recently been approved for payment, and the house shot, called “ASS” — a mixture of amaretto, Southern Comfort and sweet-and-sour mix — is surprisingly strong and heavily poured. The patrons gathered around the billiards table are the same working-class folks you might see at any other happy hour across a dozen other hole-in-the-wall-bars — though those bars don’t feature a lifeless butler who stands at the door presenting his head on a tray.

Foster has made the bar his life — he and his wife live above it. On a recent Thursday, he oversees the installation of new bar stools while explaining that the look of the place, weird as it is, actually began with a pub he’d bought in north city, which someone else had named Ye Ole Haunt. It was a sports bar, or it was until Foster and his wife, Terry, ripped out all the sports memorabilia and replaced it with Halloween props from their basement. They performed a similar makeover in 2014, when they bought the Dutchtown dive bar called Libby’s. In a matter days, they had rechristened it the Haunt.

When the regulars saw what he’d done with the place, Foster recalls, “They kind of tripped out.” But they weren’t scared off. They keep coming, keep drinking. And Foster keeps adding things. A skull here, a bloody doll there. Out back, past a garish movie poster for one of the Saw sequels, the bar opens into a backyard patio bursting with freshly planted flowers. Foster has plans to add a koi pond — and yeah, maybe a few skeletons too.