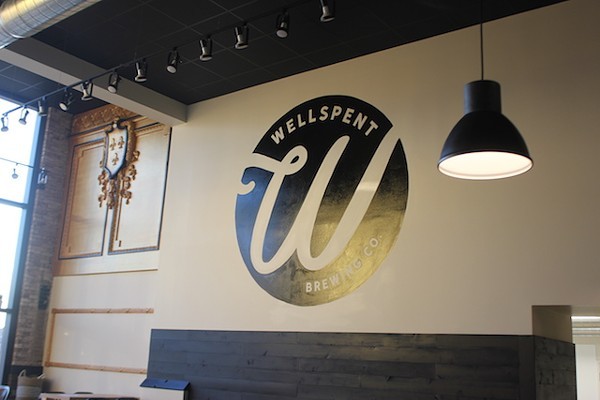 Wellspent Brewing Company (2917 Olive Street), the Midtown brewery opened by Kyle and Angela Kohlmorgen in 2018, has closed. The news was announced yesterday in a heartfelt post penned by Kyle on the brewery's Facebook page.

"With a heavy heart, Wellspent Brewing Company is closed indefinitely effective immediately," the post begins. Kyle goes on to cite financial reasons for the brewery's closure, noting that the amount of debt he and his wife had to take on to start the business made the venture unsustainable.

Wellspent opened in March of 2018 as the realization of a dream for the Kohlmorgens. An avid home brewer, Kyle got into brewing while he was in college but only considered it a hobby while he pursued a career in engineering. However, after a decade working in that field, he was ready to pursue his passion for beer and took the leap when he and Angela found what they believed to be the perfect building on Olive Street, near St. Louis University.

Known for its Belgian-style beers, barrel-aged sours and lagers, Wellspent also consisted of a tap room designed to be inviting for everyone from beer nerds to families. It was a vision that Kyle is heartbroken to let go.

"The failure of this business lies squarely on my shoulders," Kyle laments. "I'm so sorry to our customers, our vendors and everyone who has believed in us, recommended us, or just hoped we'd be there for them in the future.

Though this is the end of Wellspent in its current form, Kyle appears hopeful the this will not be the last St. Louis tastes of his beer, teasing that his "next professional chapter will be making beer."

We have reached out to the Kohlmorgens and will update as new information becomes available. In the meantime, you can read Kyle's post, in its entirety, below.

We couldn’t be prouder of our little brewery, and I couldn’t be more thankful for our customers and crew. We made great beer, built a great team, and welcomed so many folks from St. Louis and beyond. We’ve met so many wonderful people in the brewing community that we now call friends. We watched a hardworking volunteer grow into a capable, talented brewer. We hosted a newlywed couple and their families on the night of their wedding. We put so much effort into this place over the last two years, and every bit of it was well spent.

Unfortunately, our business cannot support the amount of debt we took on to get started. We had a vision for Wellspent and a commitment to quality in both beer and experience. To realize that vision and maintain that commitment, we needed a LOT more money than we had. We didn’t want to take on private investment for fear of diluting that vision and commitment. We hoped we could sustain long enough to reach a break-even point. We did all we could after starting way too fast, and it wasn’t enough.

The failure of this business lies squarely on my shoulders. I’m so sorry to our customers, our vendors, and everyone who has believed in us, recommended us, or just hoped we’d be there for them in the future. Though it ended too early, the support we received from St. Louis, our brewing colleagues, and our friends and families will always be one of my greatest achievements.

I love making beer. I don’t want to do anything else. We have a lot to sort out, but my next (professional) chapter will be making beer. Always learning. Always growing. Always striving to be a better brewer.