Under New Ownership, the Wine Tap Gets a Fresh New Vibe in Belleville 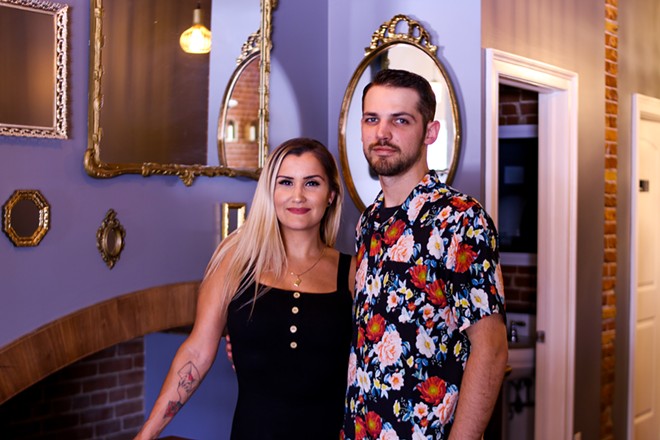 It's not the concept, building, name or even the food that guarantees a business' success — it's the love, hard work and passion that makes a business thrive. If you want proof, look no further than the Wine Tap (223 East Main Street, Belleville; 618-239-9463).

The Wine Tap was established in 2008 and has had four different owners over the past eleven years. While it remained a popular restaurant throughout its run, things never seemed headed in the right direction.

Enter Dan and Robbie Fogarty-Hayden, who took over the Wine Tap in September of last year. After a month of renovations, the pair reopened the restaurant and bar with a different approach than the previous owners, and their changes have had a positive impact on business.

"This was a great opportunity at the right time," Robbie says. "We were taken away with how beautiful the building was, but it needed a lot of work. The passion was gone, and the time and care fizzled out with it."

Dan is a Belleville native who has been in the restaurant business for over ten years. Robbie is from Canada and has experience in owning a small business. Owning a restaurant is new to both of them, but their innate sense of what people want in the Wine Tap has been apparent despite the fact that they are first-time restaurateurs.

Their most noticeable change is the concept itself. The Wine Tap is now more of an upscale restaurant than a bar. The old menu used to consist merely of flatbreads and appetizers. Now about 90% of the food is cooked in the wood-fired oven and is made from Robbie's recipes. However, it's Dan who serves as the restaurant's chef, while Robbie works the front of the house.

"We have put a lot of thought into the comfort aspect and believe in social food," says Robbie. "We want our customers to be able to come in and share the items and a glass of wine with their friends and have a relaxing time. We work hard to make sure that this is never a hectic environment straight down to the music levels." The menu consists of pizzas, salads and sharable plates like the "Sizzling Brie Spread and House Bread." This hot-out-of-the-oven cheese dip with cranberries, honey and Himalayan pink salt is served sizzling in a cast-iron skillet. Another specialty, the "Italian Mermaids," are jumbo shrimp wrapped in prosciutto and served with house-made dipping sauces. Both have been big hits.

The Wine Tap also offers a large variety of twelve-inch, brick oven pizzas. Diners can choose from such offerings as the "Ladies Love It," which is a thin-crust shell topped with red sauce, mozzarella, chicken, spinach, feta and sun-dried tomatoes.  The "Three Stooges" is made with red sauce, mozzarella, chicken, Schubert's thick slice bacon, Schubert's salsiccia and red onion. One of the restaurant's most popular pizzas is the "Pesto," which features a thin crust topped with pesto sauce, sun-dried & fresh tomatoes, chicken, kalamata olives, goat cheese and balsamic vinegar.

The wine list consists of about 30 wines by the bottle and 30 by the glass. New wines are added about every three months. Bottle prices range from $24-$200-plus, so there is something for everyone.

Seating is divided into two inside rooms and a front patio. A beautiful event space is available upstairs and can be rented out for up to 50 people.

The Wine Tap is open Tuesdays, Thursdays, and Fridays from 4 p.m until midnight, Wednesdays from 4- 10 p.m and Saturdays from 11 a.m to 2 a.m.

Scroll down for more photos of the Wine Tap.