On the Patio at Failoni's Restaurant, We're Drinking a Busch Light 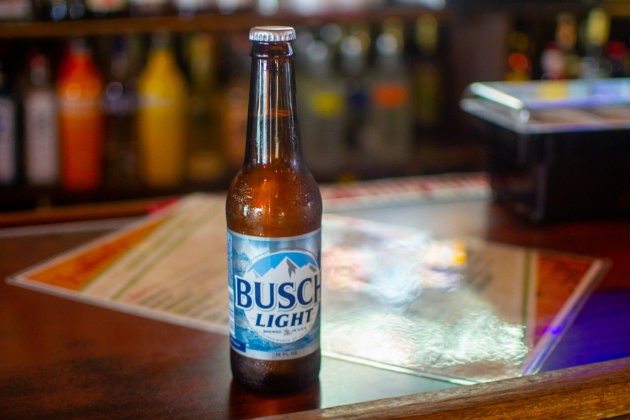 The new official/unofficial beer choice of St. Louisans is Busch beer. Granted, the pale lager has been around since 1955, and it's lighter cousin, Busch Light, since 1989, but the popularity of both are noticeably on the rise. Over the past three years, area bartenders have seen an increase in the demand for the beer — after all, fads in beer culture come and go. Remember when PBR was all the rage despite tasting like crap? Well, Busch and Busch Light are having their moment and we are here for it. It’s delicious, easy to drink and easy on the wallet. A 30 pack will only set you back $15.73 plus tax. That’s roughly 50 cents a beer!

The rise in Busch and Busch Light sales seemingly came out of nowhere. Though Bud Light is still the king when it comes to overall sales and distribution, local restaurateurs have noticed the shift. Joe Meiners, part-owner and General Manager of Failoni’s, took over the family business a decade ago and vividly remembers the first night he started selling Busch Light.

“Three years ago, some regulars requested we start selling Busch Light," Meiners recalls. "I wasn’t sure how it would go, so I bought a couple of cases. We sold out the first night and haven't looked back since.”

Failoni’s, the family-run Italian restaurant and bar, has been in business since 1916; when one graces such a storied institution, ordering the local brew is a rite of passage. It’s just a beer kind of place, and the beer of choice should be none other than St. Louis’ own Busch Beer. Or in my case, Busch Light, because—calories (and the elusive dream of a beach body).

Once inside the confines of the gem that is Failoni’s, you’ll notice a dimly-lit interior, neon beer signs and a similar atmosphere to almost every dive bar/restaurant in existence. Where the establishment really shines is its expansive patio and various entertainment offerings, like live music, karaoke and trivia. My first experience came on a Wednesday afternoon, where I was treated to the sounds of crooner Tom Kelly singing easy-listening tunes like Warron Zevon’s “Werewolves of London” and almost every Billy Joel song in existence. After a taste of some of their toasted ravs and other specialties perfected over a century in business, I was sold.

Nowadays, bars like Failoni’s — family-run, laid back and with good food and a great atmosphere — are harder to come by. Trendy spaces and corporate concepts garner the most attention. But, there is no better place to enjoy an ice-cold Busch Light on a summer evening than out on the patio of Failoni’s.

Every Thursday, Failoni’s hosts a four-person band called the Convertibles. On Friday nights, you will find St. Louis treasure Tom Kelly, who has been singing at Failoni’s for the past 25 years. On Saturdays, there is always a different band, but as always—no cover charge.

“There is a whole new generation of St. Louisans finding out about Failoni’s," Meiners says. "Between the different bands we bring in and the home-cooked meals my grandma, Rosemary Failoni, still cooks five days a week, we keep the traditions but also keep it fresh.”

St. Louis is indeed a traditional kind of town, and places like Failoni’s know a thing or two about maintaining that spirit. Next time you reach for your beloved Bud Light, consider giving a new St. Louis tradition a try and grabbing an ice-cold Busch Light instead.