David Sandusky is ready to shake up the barbecue scene on his own terms at BEAST Butcher & Block (4156 Manchester Avenue; 314-944-6003). The hotly anticipated location opened in the Grove on June 15.

“We feel like we are underestimated, an off-the-grid, kind-of company,” Sandusky says. “We don’t necessarily have to meet the expectations of those who think they know how to do barbecue right, or that have these preconceived notions of what it’s supposed to be. We do what we want, whenever we want, however we want.”

BEAST Butcher & Block is an offshoot of Beast Craft BBQ Co. (20 S Belt W, Belleville, IL; 618-257-9000) the acclaimed Belleville restaurant that opened in 2014. Riverfront Times food critic Cheryl Baehr praised the barbecue at Beast as being the best in the St. Louis area. Sandusky owns and operates both restaurants with his wife, Meggan.

BEAST Butcher & Block has room for 95 guests inside the 6,000-square-foot space; an outdoor patio seats 25. The barbecue complex has a whopping six smokers in the back of the building, next to its parking lot. Diners order their food through counter-service, but that's only part of the BEAST experience. Two other entities reside in the space including a butcher shop, named the Butchery, and a forthcoming interactive dining experience, the Skullery, where meat will cook on live coals right in front of the customer.
“We really want to move barbecue forward,” Sandusky says. 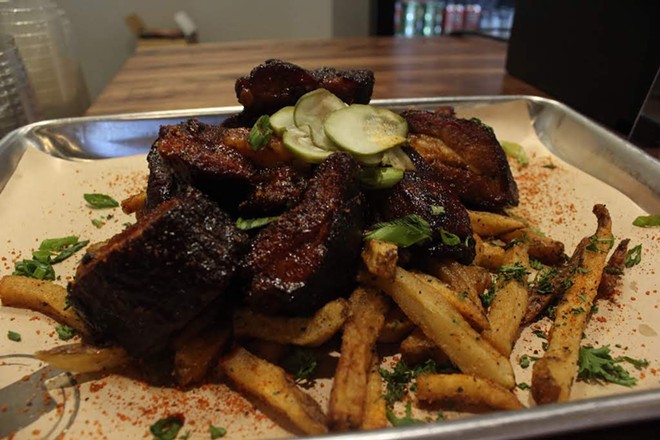 Sandusky wants this restaurant to be anything but traditional, especially in terms of the menu. He says he is excited to cook St. Louis classics like pork steak and snout and even add vegetables to the menu. While Sandusky says it’s important to hold on to St. Louis' barbecue heritage, he says you can’t peg BEAST down to any barbecue style — they’re just doing their own thing.

“We’re not St. Louis-style. We’re not Texas-style. We’re not Carolina. We’re not Kansas City,” Sandusky says. “We’re not any of those things. We do whatever we want to do. We are what we want to be.”
Meat is sourced from out-of-state farms that have reputations for treating animals ethically. Pork is sourced from Compart Family Farms in Minnesota and beef comes from Idaho's Snake River Farms. Locally-sourced meats are also available both on the restaurant menu and in The Butchery. Draft and bottled beers are available.

Seating at BEAST Butcher & Block consists of wood tables with brightly colored chairs. A mural featuring an animal skull and part of the St. Louis skyline stretches across one wall— a large, brightly colored painting of a boar is emblazoned across the exterior wall. Often, rock music plays throughout the restaurant.

In addition to dine-in service, BEAST serves a variety of local meats, vegetables, and barbecue sauce at the adjacent butchery counter, the Butchery. All prepared items are made according to Sandusky’s personal recipes.
When the Skullery opens in a few weeks, Sandusky says it will be getting at the core of what barbecue is. He calls the experience “fire-to-table.” Diners will be able to watch food as it's being cooked, and, Sandusky says, maybe even help cook it. He wants to keep the scene intimate and interactive.

“If they can’t interact with it, they can’t learn from it, they can’t see it, they can’t be involved with in it. It doesn’t mean anything to them,” Sandusky says.
Sandusky is no stranger to providing that sort of elevated experience to guests. Before opening BEAST Craft BBQ in Belleville, Sandusky worked in fine-dining. Eventually, he realized how much he loves barbecue for being a cornerstone of America.

“It’s just at the heart of who I am, and it’s a way for me to express myself as my art,” Sandusky says.

Sandusky is especially excited to be in the Grove. He says it felt like every other St. Louis neighborhood was represented by its own barbecue place, and he looks forward to being that place for the Grove.

At the end of the day, Sandusky says his main goal is to support his own family and the families of everyone who works at BEAST. However, he is not shy about his ambition to disrupt the barbecue scene. 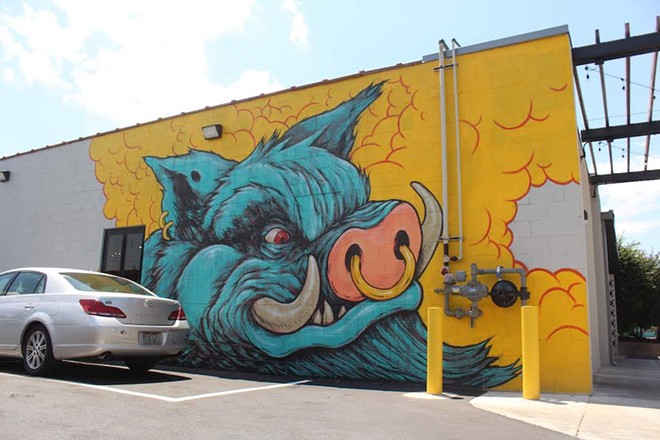