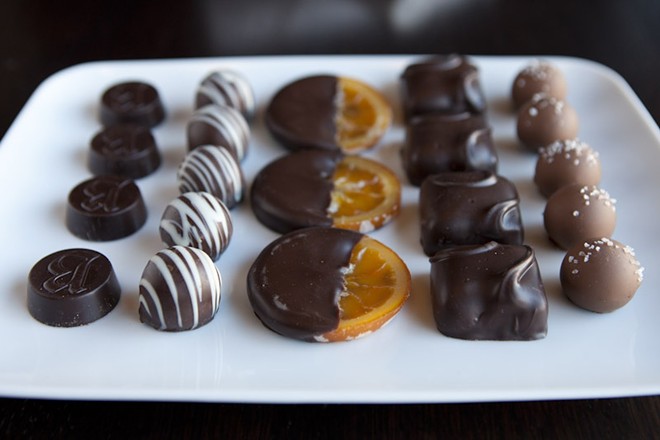 Dan Abel Jr. remembers a time — not that long ago — when Bissinger's Handcrafted Chocolatier was his company's biggest competitor. However, unlike most rivals, the Chocolate Chocolate Chocolate Company executive always felt a sense of fondness toward the storied brand.

"Bissinger's was our main competitor," Abel Jr. recalls. "But I always felt that to be in competition with them was an honor. Most competitors do not have that sort of good feeling toward the other company, but we always did."

“We have invested millions into our manufacturing infrastructure in the last 24 months, [and the] timing was perfect to add a legendary company like Bissinger’s to our portfolio,” says Dan Abel Sr., Abel Jr.'s father and the president and CEO of Chocolate Chocolate Chocolate Company.

However, as Abel Jr. explains, the two companies began their relationship as early as the beginning of the year without skipping a beat.

"We've been making the Bissinger's famous raspberries since January, and no one even realized it," Abel Jr. explains. "It proves that people can expect the same quality and products from Bissinger's as they always have."

According to Abel Jr., he and his father had heard "through the grapevine" that Bissinger's was going up for sale and felt compelled to keep the local brand in town. They approached Tim Fogerty, Bissinger's former president and CEO, and made an offer to buy the company that was ultimately accepted.

Fogerty, owner of 23 City Blocks Hospitality Group, will leave the chocolate business to focus on his restaurant concepts that include the Caramel Room, Lumen Private Events Space and the Chocolate Pig.

For their part, Chocolate Chocolate Chocolate Company plans to maintain the Bissinger's brand, both in name and with its unchanged recipes, as a separate entity. However, Abel Jr. notes that his company sees several opportunities for the brand, such as additional products that, while still of the highest quality, appeal to customer's looking for a lower price point.

"A $20 box of chocolates can be a harder sell than a $5 chocolate bar," Abel Jr. explains. "We plan to expand that part of Bissinger's and get our products into the Straub's of the world. We see a lot of opportunity there."

The acquisition marks a new chapter for the legendary Bissinger's, whose roots run all the way back to 17th-century France and the courts of kings. The brand has been synonymous with St. Louis chocolate making since arriving on the scene in 1927 — a factor that weighs heavily on the Abel family's decision to take over the brand.

"When we heard Bissinger's was for sale, we were really bummed at the thought of it leaving St. Louis," Abel Jr. says. "It would have been really sad to have such a local company leave, which is why it's so great that we are able to keep it here in town."

We are aways hungry for tips and feedback. Email the author at cheryl.baehr@riverfronttimes.com