At the Third Rail, Chris Muether Gets Back to Where It All Began 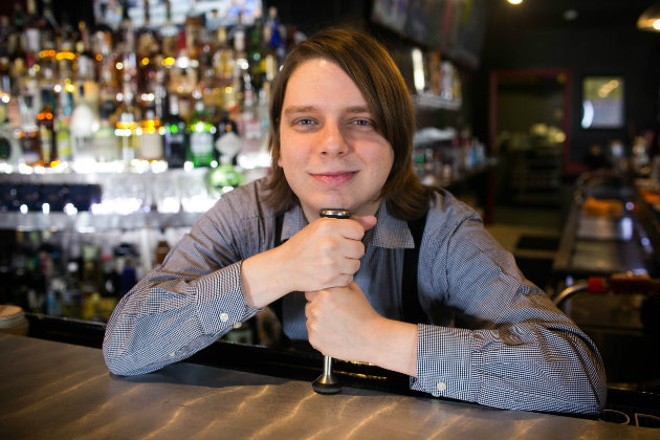 Chris Muether can easily say he got his start in the bar business earlier than anyone in town — so early, in fact, that he was hanging out behind the bar before he was even born.

"My mom was a bartender when she was pregnant with me, and she did that until she was at least seven or eight months along," Muether explains. "When she got too far along to bartend, she was the door person. She likes to joke that I had my diapers changed on the top of beer boxes."

Understanding his history in the business, it's no surprise that Muether ended up as proprietor of his own place, the Third Rail STL (5625 Manchester Avenue; 314-833-4323). Growing up, he was a fixture at his grandfather's bar, George's, and became a key player at the establishment when he and his mom reopened the place as Danno's Pub in 2009.

However, Muether did not always feel that he was destined to be in the business. After graduating from high school, he attended Saint Louis University, where he studied political science. He did not graduate, opting instead to take a job during the 2008 election doing community organizing and voter registration.

Muether assumed politics was his path, even though he quickly realized that he did not have the passion nor the stomach for what that line of work entailed. However, he trudged along until the job he was promised after the election disappeared when the economy crashed. Unsure of what to do, he gravitated to what he knew best: the bar business.

Now free to help his mom and then-step-dad with a business, he joined them in launching Danno's, which enjoyed a successful six-year run. There, Muether learned the craft of bartending as well as the daily tasks associated with running a business. However, when Danno's closed suddenly for personal reasons, he found himself despondent, reclusive and unsure of what would come next.

He'd find himself back behind the bar with the help of his friend, Tony Saputo. The acclaimed bartender was working at Layla in the Grove and offered Muether a job. He accepted, and before he knew it, he was back in his groove, serving guests and pushing himself to learn more about the craft of bartending.

"I had a tough time with the bar closing and had to deal with that," Muether says. "But I wanted to take time to broaden my knowledge base and work at a bunch of different places. I noticed from peers that they had worked at a ton of places and realized that, having only worked for four years [at one place], it was a weak spot on my resume. You get to see cool stuff at other places — or see what you would never do."

After Layla, Muether set out to gain as much experience as he could, working at such varied establishments as the Delta Queen Port of Call in Kimmswick, Three Kings Public House, Miracle pop-up bar at Small Change, Boundary and Blood & Sand.

Muether was happy in the industry and would have continued working for others indefinitely were it not for his now-business partner, Brian Babcock. Though Muether and his mother were somewhat cynical about business ownership following the loss of Danno's, Babcock came at them with infectious optimism. The longtime front-of-house veteran has always wanted to own his own place, and he knew that Muether and his mother would be able to help him do that. Together, the three looked for the right spot, signed a lease on the former Keetons Restaurant and Sports Bar and got to work converting it into the Third Rail.

"If I would have started from scratch, I probably would have opened a small, boutique cocktail place, but the opportunity came up and it just mirrored Danno's so much," Muether explains. "I was able to lean on prior experience of knowing what worked and have been able to retain some of the features of what people loved about it."

Muether describes the Third Rail as the quintessential neighborhood bar — a place that caters to all walks of life and offers a little something for everyone whether that is a Busch beer or a well-made cocktail. As he explains, he and his team are less concerned with what is in the customers' hands than the time they are having while drinking it — something he thinks is crucial in a highly competitive industry.

"At the end of the day, I am very excited about the growth and variety in the St. Louis food and beverage scene, but we are reaching peak restaurant," Muether says. "There is a lot of competition out there, so anytime somebody comes in I am grateful that they took the time out of their day to come in and see the place. My emphasis is to make that worth their while."

Muether took a break from the Third Rail, which will celebrate its official grand opening in the first part of August, to share his thoughts on the St. Louis food and beverage scene, is passion for crab Rangoon and barbecue sauce (not together) and why you will never see a fennel seed cocktail at his bar.

What is one thing people don’t know about you that you wish they did?
How much I truly appreciate the patronage of anyone who comes into my establishment. I'm keenly aware that there are a lot of other great options available when deciding where to go out for the night. It is never lost on me how special it is when someone chooses to spend their time with me. In this day and age, it can be a challenge to wrestle someone from their Netflix and comfy couch, so I always try to make people feel like their time is valued and do my best to offer them the best service I can.

What daily ritual is non-negotiable for you?
Everything is negotiable when it comes to the uniqueness that is one day to the next. However, I try to keep up with current events both locally and worldwide.

If you could have any superpower, what would it be?
The ability to instantly deconstruct the elements of the political/economic structures of our society that operate like a cancer to serve only their own selfish interests, then recompose it in a fashion that instead respects the basic needs and available resources of the world as a whole.

What is the most positive thing in food, wine or cocktails that you’ve noticed in St. Louis over the past year?
It's been echoed by others in this space, but the trend towards non-alcoholic or low ABV beverages has been very encouraging. I was surprised to discover the majority of our staff at Third Rail no longer wish to drink alcohol. While the reasons vary from person to person, it's great to see people can still enjoy the nightlife St. Louis has to offer without feeling the pressure of imbibing.

What is something missing in the local food, wine or cocktail scene that you’d like to see?
More diners who describe themselves as "foodies" trying out small POC-owned family restaurants. I love supporting restaurants who bring family traditions to the table in a non-pretentious way rather than re-interpretations of ethnic dishes in posh upscale spots . I'm not discounting chefs who utilize a variety of influences in their cuisine — there are many who do so at a very high level — but sometimes it's best to go straight to the source. Also supporting these business owners makes a positive difference in our wonderfully diverse city.

Who is your St. Louis food crush?
It used to be the energetic older woman who worked at Asian Kitchen on Olive (I'm assuming the owner, but I can't be certain). She was always so friendly and outgoing with customers; I loved her spirit. Unfortunately, it seems as though the old ownership sold out late last year, and while I wish the new folks the best of luck, they did take my favorite hot pot off the menu, and it still hurts me deep inside. So, if that wonderful woman is still out there, tell her I'll gladly pay good money to visit her home for the #63! I still remember it: pork belly, squid, hot peppers and rice ovalettes with that fantastic red broth! Currently, however, I will be topical and say that Nick Bognar deserves every bit of praise being sent his way right now. The meal I had at Indo the other night was breathtaking. He truly cares about his craft and goes the extra mile to make everything special. The nigiri is unbelievable.

Who’s the one person to watch right now in the St. Louis dining scene?
I took some guest bartending shifts at Blood & Sand prior to opening Third Rail and was astounded at the progress Eduardo Perez has made in his short tenure as a bartender. Shortly after we first met, he began as a server's assistant while I was working for Boundary at Cheshire, and now he is crushing busy dinner services five to six times a week. His cocktails have a real unique voice and identity to them. That may seem to be a rather high-flown way of praising someone's work, but I truly believe in any creative endeavor where there's a plateau one overcomes when they finally have a firm grasp of the conventions of their craft and their work begins to illicit its own character. I strongly recommend checking Blood & Sand's new summer menu where some of his drinks appear along those of the incomparable Brad Phillips.

Which ingredient is most representative of your personality?
I would have to say brandy. Years ago I may have said cognac, or French brandy in general, but after exploring the category in more depth, I've come to adore the overt muskiness of Metaxa or the provincial but often overlooked plum, pear and quince brandies of eastern Europe. Although often sweeter than more beloved spirit categories, they have a lot of depth to offer for those who dare to open up to them.

If you weren’t working in the restaurant business, what would you be doing?
Sleeping a lot more.

Name an ingredient never allowed in your restaurant.
I have no qualms with it being in the restaurant, but you won't see me using fennel seed in a cocktail anytime soon — and those restaurants who have used it to besmirch perfectly fine St. Louis-style pizza should be ashamed.

What is your after-work hangout?
I rarely have time or energy to go out after work to be completely honest. Lately though, I've been hitting up the Gramophone because it's close by and it seems to be 85% industry by closing time. Also, the Alcatraz sandwich "slaps" (as one sodden Blues die-hard let me know enthusiastically the night we won the cup to the repeated strains of "Gloria").

What’s your food or beverage guilty pleasure?
Crab rangoon — full stop. It's not that I think eating them is embarrassing per se, but I'd probably be ashamed to have statistics on how many I've consumed in my life. Also, I eat BBQ sauce on nearly everything. The sauce is the boss.

What would be your last meal on earth?
A trio of dishes from my mother — beef stroganoff, pastry-wrapped pork tenderloin and beef brisket with mushrooms.