At Kingside Diner, Chef Eric Prophete Is Having 'the Time of My Life' 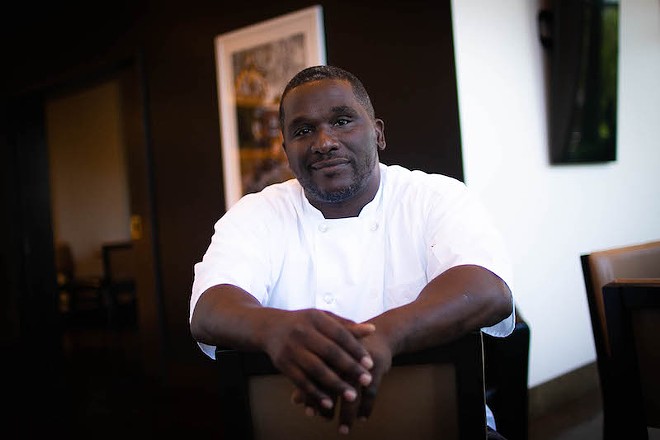 Eric Prophete was a carefree teenager in 1986, enjoying all the rites of passage that come with being a high school senior. There was just one problem: They cost money, and his mom was tired of footing the bill.

"I was preparing for graduation ceremonies, prom and all of that, and it got pretty expensive," Prophete recalls. "My mom told me that I needed to get a job so I could contribute. We lived on North Euclid, and I could see the Central West End from my porch, so I went down to Cafe Balaban's and got hired as a busboy, but every time I went in the kitchen it looked like they were having all the fun. I thought to myself, 'Wait, I think this is what I want to be.'"

Prophete now lives that calling as the executive chef of Kingside Diner (two locations, including 4651 Maryland Avenue; 314-454-3957). Still, it was a long path to get there. After graduation from high school, he dreamt of becoming a barber while working in kitchens around the city — the Missouri Athletic Club, O.T. Hodge Chili Parlor and the Eggery Etc. in Creve Coeur.

It took getting into corporate restaurant work to realize that cooking was his career path.

"Back in the '90s, casual dining was starting to become a thing — places like Applebee's and Outback," Prophete recalls. "I worked at both and became the kitchen manager at Outback. That's when I had my 'aha!' moment that I was in it for the long haul."

Prophete worked at Outback for a few years, but he admits to getting burned out on the corporate path. He left the industry for a few years and got a job doing factory work, then another working for Charter. When he and his wife fell into a profitable real estate deal, he thought he would build upon that experience and start a real estate business.

It wasn't as easy as he thought. Because he wasn't a licensed broker, he did not qualify for tax breaks and other benefits. He also found himself with a lot of idle time and needed to supplement his income. Just like his days as a teenager, he found himself in the restaurant business out of necessity — and again had the realization that it was where he wanted to be.

"I got a job working at Soulard Coffee Garden, and it was completely different than any experience I'd had," Prophete says. "I had worked at all those corporate places, so I had never experienced the amount of freedom and ability to be creative. It was there that I really woke up and realized that this is what I am supposed to do."

Prophete loved his time at Soulard Coffee Garden but was looking to pick up extra hours. A friend told him about a new place that was opening — a new concept called the Shack Pub Grub. He applied, and before he knew it, he was creating menus and, eventually, helping the concept grow into what is now the Shack.

Prophete worked at the wildly popular local daytime restaurant chain for five years, running its commissary and creating dishes that have become its staples. Feeling restless, he decided to apply for a cook position at Kingside Diner. He was initially surprised when he sat down to an interview with the owner himself — Aaron Teitelbaum.

"Now I know that Aaron is very hands-on and had plans," Prophete says. "He saw my resume and where I came from and offered me the executive chef position."

Two years later, Prophete is in charge of the culinary operations of both the original Central West End location and its little sister in Clayton. Though it's his first time running multiple units, he's found his groove, which, to everyone's surprise, lands him on the line with frequency.

"It's just what I do," Prophete says. "Sure, I could get someone else to do it, but this is how I lead, and I love it. I've been doing this for 30 years now, and I'm not doing it to pay the bills; I'm doing it because it's my passion — and I'm having the time of my life."

Prophete took a break from the kitchen to share his thoughts on the St. Louis food and beverage scene,  his daily ice cream habit, and why he's the best chef to contact if you are in need of a haircut.

What is one thing people don’t know about you that you wish they did?
I spend a great amount of time and research to create great menu items and great dining experiences for guests.

What daily ritual is non-negotiable for you?
I enjoy ice cream every night, bowl or bar doesn’t matter.

If you could have any superpower, what would it be?
Super-human endurance to get all the things I need to get done.

What is the most positive thing you've noticed in the St. Louis restaurant scene over the past year?
I like the commissary kitchens for potential restaurateurs who have an idea for a product but no capital to implement it.

What is something missing in the local food, wine or cocktail scene that you’d like to see?
More ethnic restaurants. We have a great array already, but more Jamaican and Caribbean establishments.

Who is your St. Louis food crush?
Julie West of Soulard Coffee Garden is an amazing chef and pastry chef.

Who’s the one person to watch right now in the St. Louis dining scene?
Yael Moose, the executive chef at Hopcat, has been in the restaurant scene for decades.

Which ingredient is most representative of your personality?
Avocado. It’s been around for a long time, makes things better and is very versatile.

If you weren’t working in the restaurant business, what would you be doing?
I would have been a barber. Growing up, my friends were either paper boys or cut grass and did odd jobs around the neighborhood. I was the neighborhood barber.

Name an ingredient never allowed in your restaurant.
Seasoned salt.

What is your after-work hangout?
My yard, doing lawn work. I'm in pursuit of the perfect lawn.

What would be your last meal on earth?
My wife's chili. It's do die for.