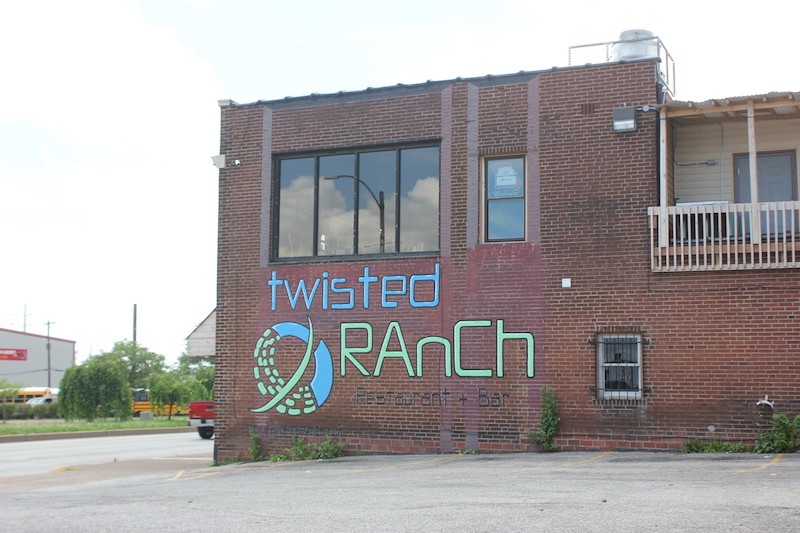 When St. Louis' ranch-dressing-themed restaurant moved into its new home last year, it opted for a sign as bold as its flavors. Painted on its brick facade facing Seventh Street, the sign for Twisted Ranch (1731 South 7th Street) features bright blue and green paint and a thoroughly modern font.

Unfortunately, its home is in a historic district. And that's landed Twisted Ranch in trouble at City Hall.

According to an agenda for this afternoon's meeting of the St. Louis City Preservation Board, Twisted Ranch sought a permit for the sign only after being cited by both a city building inspector and the city's Cultural Resources Office. Noting that the sign does not meet Soulard Historic District standards, the city denied the request. The restaurant is appealing that decision today.

Chad Allen and Jim Hayden, the restaurant's co-owners, did not return a call seeking comment this morning.

The agenda notes that the sign is too large by historic district standards — such signs may only take up ten percent of the public facade or 40 square feet, whichever is smaller. Beyond that, the brick wall hosting the sign has not been previously painted beyond "a smaller illegally painted sign" put there before Twisted Ranch's addition. In historic districts, the city generally prohibits the painting of masonry walls, saying that moisture builds up behind the paint and can lead to its deterioration, the minutes note.

If the eatery's retroactive request for a permit is denied at today's meeting, the restaurant could land in court — and could face fines for installing a sign without a permit. And, of course, it could be forced to take the sign down entirely.

Twisted Ranch first opened in the heart of Soulard four years ago. It moved into its significantly larger home, which was previously home to Soulard Restaurant & Bar, last spring.

Update: The Preservation Board has rejected Twisted Ranch's appeal. We'll stay on this story as it develops.