Fred and Ricky's Will Close Both Stores and Its Retail Operation 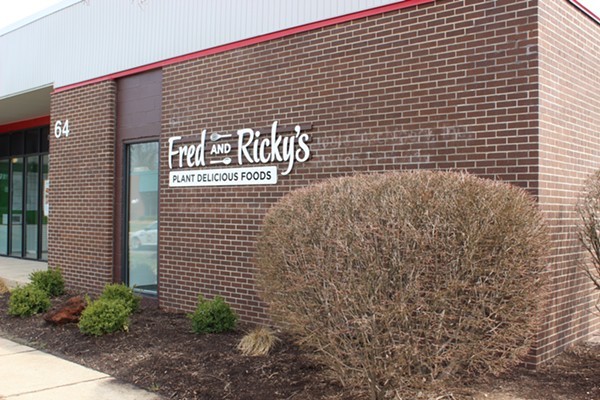 Vegetarian grab-and-go shop Fred and Ricky's (64 Weldon Parkway, Maryland Heights) is closing both its locations this month — and shutting down its retail operation as well. The plant-based food purveyors, which had stores in Creve Coeur and Maryland Heights, as well as products for sale in a half-dozen grocery stores in the city, had a three-year run.

But co-founders Kathleen and Rich Waidmann are going out with their heads held high, Kathleen Waidmann says.

"We're really pleased that we could make a contribution to St. Louis in this way," she says. "If nothing else, we've educated consumers here on a genre they wouldn't have known about if we didn't put this food it in front of them."

She adds, "If you wanted to start a vegan grab-and-go business, St. Louis wouldn't be the place for it. But we did it here because that's where we lived — and St. Louis was ready for it. We had sales in eight different stores. The only problem is that Ricky and I are tired."

In a letter to customers sent via email earlier today, the Waidmanns explained that they were choosing to close up shop rather than compromise their standards:

"As we crossed our 3-year anniversary in April of 2019, Rich & I have spent a lot of time trying to decide what the next chapter would be for Fred & Ricky’s. While we’ve helped many people achieve better health, unfortunately the demands of this business have not helped our own health or quality of life.

"We’ve looked at many potential changes to our business model that would help alleviate some of the challenges, but we’ve not found any options that don’t sacrifice the quality of our products or substantially raise our prices. We’ve made the difficult decision to suspend our operation."


Kathleen Waidmann said the couple was winding things down in a way that would give customers two weeks to find new sources of vegan food, and also making sure employees received severance too. Fred and Ricky's offered insurance, 401K and livable wages, which the Waidmanns took pride in.

She's not sure what's next for herself and her husband — or the business they helped to create. "We have no idea what the future will hold," she says. "We're open to any conversation anyone might want to have."

Both shops will close for good after the day's business on June 22. Fred and Ricky's is making its last delivery to retail outlets this Friday, June 14. The company will sell frozen food from its Maryland Heights location while supplies last from 10 a.m. to 3 p.m. June 24 to June 27.