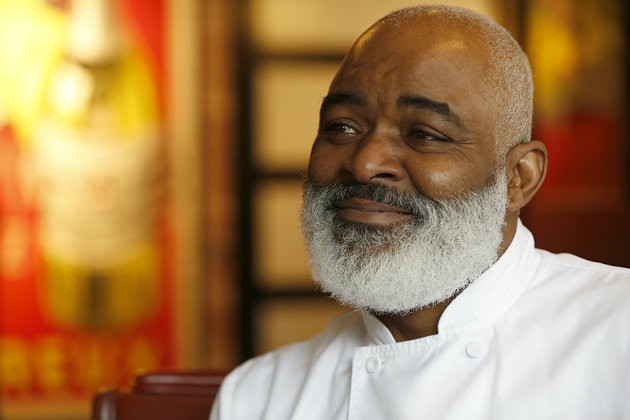 In three decades of work, Ramon Cuffie has become one of the city's most beloved chefs, cooking in Seattle, France and Washington, D.C., in addition to gracing some of St. Louis' top kitchens. That's why, looking back over his storied career, he can't help but laugh that it all began with being told to stay out of the kitchen.

"I started in the business as a kid — fifteen years old — working at the Chase Park Plaza," Cuffie recalls. "I was a busboy, but I begged the chef to let me in the kitchen. It was a stern 'no.' It went on for about six months until he finally came to me and asked me if I really wanted to work in the kitchen. I said yes and came in that Saturday or Sunday to crack eggs and make omelets. I've been in the kitchen ever since."

Cuffie may only be a month into his new role as executive chef at Herbie's (8100 Maryland Avenue, Clayton; 314-769-9595), but he is no kitchen neophyte. His kitchen career that began to take shape when he was a young cook at the legendary Al Baker's restaurant. There, one of the restaurant's chefs, Van Hardy, took Cuffie under his wings and showed him how to turn his passion for cooking into a career.

"Back then, there were no star chefs and people thought of it as a misfit job, but that's where it all turned around for me," Cuffie says. "He made me look at the position as something different."

Cuffie dropped out of high school and threw himself full-time into kitchen work at Al Baker's, where he worked for a few years before leaving to help open another restaurant. After a brief period, he decided to get out of the business to explore other options. It wouldn't last long, however, and he was eventually pulled back into kitchen work, this time at Bar Italia in the Central West End.

If Al Baker's made Cuffie think of the kitchen as a profession, Bar Italia was where he took that role and ran with it. For a decade, he helmed the kitchen at the Mediterranean spot, honing his craft, and — more importantly to him — soaking up the multicultural ethos of the restaurant.

"The owners were artists; the wait staff was from all over the world," Cuffie says. "You'd get to hear five or six different languages in that restaurant, so it was a great way to travel without leaving the city."

Cuffie may have stayed at Bar Italia for even longer, but a fateful vacation in Seattle called him in another direction. Feeling the Pacific Northwest calling, he came home, packed his bags and set out for an adventure. He had no job, no contacts and no place to live, but he quickly found restaurant work and settled into his new town.

Cuffie traveled and worked throughout the Pacific Northwest for a few years before heeding the call to go overseas. A friend of a friend was starting a program taking culinary students over to France, and he needed some help. The next thing he knew, Cuffie was on a plane, embarking on an adventure that would last longer than he originally intended.

"I ended up staying in France for two years," Cuffie explains. "I lived in Avignon and even had a chance to do a restaurant of my own. It was pretty cool — one of the best experiences of my life."

Three months shy of getting his residency, Cuffie lost his passport and was unable to stay. Disappointed, he came back to the U.S. and worked on the American Orient Express for a season before landing in Washington, D.C. It was supposed to be a temporary gig — his plan was to go to New York — but then September 11th ground that city's fine-dining scene to a halt.

Unsure of his next step, he came back to St. Louis and worked at various kitchens before deciding to fulfill his dream of attending culinary school at the Culinary Institute of America. He admits it was an odd thing to do, considering he was already an accomplished chef, but it was important to him.

There was just one problem: He couldn't get in.

"I never graduated high school, so they wouldn't let me in," Cuffie explains. "So I had to get my GED. Once that happened, I did their accelerated program. People thought it was a waste of time and money — here I was 50 years old going to culinary school — but I wanted to try something different. It was a good thing."

After graduating, Ben Poremba contacted Cuffie to take on the role of executive chef at his ambitious French-Italian restaurant, Parigi. Cuffie received critical acclaim for the project and worked at the restaurant from its opening in 2016 to its closure in October 2018.

After Parigi, Cuffie took a break from the kitchen to ride his motorcycle, read and rest. It didn't last long. His friend, Aaron Teitelbaum, who owns Herbie's restaurant, needed a classically trained and experienced chef to head the kitchen. He was confident Cuffie fit that bill.

Now, one month into that job, Cuffie is relishing his role at the helm of a restaurant with such history. He's embraced its classic menu, taking it as an opportunity to look at iconic dishes with fresh eyes and make the best versions of them that he can.

"It's not like we are reinventing anything. It's all been done before," Cuffie says. "But I get to rethink a Cobb salad or a Wellington. It's taking me back to when I cured my first salmon or made my first confit. When I strive to make these things, it comes from having read about them and using my imagination about how they should be before I'd ever traveled. When you learn that way, the dish is different. You get closer to it."

Cuffie took a break from Herbie's kitchen to share his thoughts on the St. Louis restaurant scene, his unyielding passion for good cheese, and the person he credits for making him the chef he is today.

What is one thing people don’t know about you that you wish they did?
Nothing — ha! I've been in the business so long people already know me.

What daily ritual is non-negotiable for you?
It actually changed this year. I used to have a cigarette and morning coffee, but I quit. Now, I get on the elliptical machine every morning. Whether I'm late or not, it's what I've been doing every day for the last seven months. It’s gotten to be an important thing for me to do.

If you could have any superpower, what would it be?
I wish there were 38 hours in the day! I'd also like to be able to grow wild mushrooms on command, but really, time is the number one thing. I never seem to have enough of it.

What is the most positive thing in food, wine or cocktails that you’ve noticed in St. Louis over the past year?
I'd have to say that you don’t just see men in chef jobs anymore. Women chefs are getting their recognition. Some of the biggest influences I’ve had are women chefs. The other is just seeing more diversity in the kitchen in hierarchy positions. We see a lot of immigrants in the kitchen on line and doing prep, but you are seeing a lot more in higher positions than there used to be. Like me, I don’t know how many African-American chefs who have been at Herbie's...

What is something missing in the local food, wine or cocktail scene that you’d like to see?
I don’t want to sound negative, but respect for diversity in the kitchen could improve. We see more people of color and women doing things in the culinary world. That's great — it means things are changing.

Who is your St. Louis food crush?
The reason I talk about women and people of color in hierarchy positions is because we don’t often have the money to travel or go to places, and we get devalued when it comes to understanding European flavors because of it. That’s not true. If you read you can figure those things out. You have to believe in you. If I had a crush, it would be a chef that I worked with as a kid at Al Baker's. He was an African-American man and a great chef, and no one knew him. His name is Van Hardy. Every time someone asks me where I came from, they focus on the big names, and they were great to me and I learned a lot. But the person who helped me as a young man look at the position and keep myself going was him. I don’t think I would have stayed as long and gotten to this skill level if I hadn’t met him. It's always has been him.

Who’s the one person to watch right now in the St. Louis dining scene?
There isn't just one. I like everybody. I look at it as a collective that I want to be a part of.

Which ingredient is most representative of your personality?
I'd have to say a salad. It has all kinds of things in it — texture, crunch, flavor. You name it; it's there. It can be dinner or lunch and you can mix anything you want with it. As a chef, that’s what you have to be: flexible.

If you weren’t working in the restaurant business, what would you be doing?
I would probably teach something, because this is the only job I’ve ever done. I don’t think many people can say that.

Name an ingredient never allowed in your restaurant.
I don’t like lying on the menu. If I say it’s an aioli, it’s an aioli.

What is your after-work hangout?
I used to love going to the Fox and Hound at the Cheshire, but now I just go home.

What’s your food or beverage guilty pleasure?
Cheese. The Wine Merchant is my place for junk food. They all know it.

What would be your last meal on earth?
A butterfinger, Brillat-Savarin (a triple cream cheese) and a slice of Marcia Sindel's tiramisu. She used to own [the now-closed] La Dolce Via — hers was the best.