For Charlie Gitto, Spaghetti Is Always the Answer 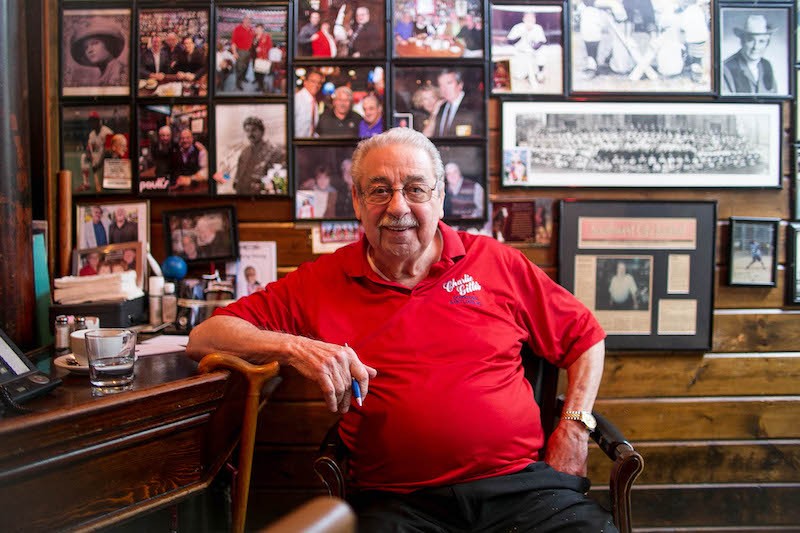 Every morning around 10:30, Charlie Gitto arrives at the downtown restaurant that bears his name, gets a cup of coffee from the bartender and settles into his designated spot at the corner of the bar — the best seat in the house, if you ask him.

"This is my office," Gitto explains. "I can see the entire restaurant, and who comes in and who goes out. I'm comfortable here."

Gitto's perch may be tucked around the corner from the front doors, but that doesn't stop an endless parade of friends, regulars, acquaintances and general well-wishers from finding him. After 40 years running Charlie Gitto's Downtown (207 North Sixth Street, 314-436-2828), it stands to reason that the oft-referred-to "Mayor of Sixth Street" would spend his days at the end of a receiving line of people eager to say hello.

It's a far cry from his first days in the business, working as a lowly busboy on the Hill. Gitto got the gig as a summer job when he was in eighth grade, and as he explains, it's where his passion for the restaurant industry began.

"It was this famous steakhouse, and everyone went there," Gitto recalls. "There were celebrities who'd come in, this old-fashioned bar, people downstairs cooking steaks. Something about it just got into me — it was the atmosphere that I liked. It really captured me, and I thought that this was the kind of life that I wanted. I was thirteen years old, and I fell in love with it."

Though he was barely a teenager, Gitto knew then and there that he wanted to run a restaurant of his own one day. After gaining experience as a waiter, when he was just 22, Gitto took his first stab at restaurant ownership, with admittedly mixed results.

"This place on the Hill opened up, and I bought it, but it never set the world on fire," Gitto explains. "But I learned a lot — what mistakes I didn't want to make. I grew up there; it was like going to college."

Gitto sold the restaurant and went on to become maître d' at a few different restaurants, including the hotspot Stan Musial & Biggie's. He thrived on the energy that came with the position — something that others around him noticed. In fact, some of his family members were so impressed by his knack for the business that they asked him to come work at a new place they were opening downtown.

That restaurant, originally part of the Pasta House family, opened in 1974 with Gitto as its manager. After a few years, he bought the restaurant and building and renamed it after himself, soon attracting a crowd of movers and shakers. (His son, Charlie Jr., opened Charlie Gitto's on the Hill in 1981; the two restaurants are not associated, and Gitto's son has contested that he used the name first.)

Celebrities, politicians, media personalities and a who's who of the city patronized the downtown restaurant, one after another, eager to get a taste of what Gitto was serving — something that went beyond what came out of the kitchen.

"The secret to us holding our own is that I'm here almost every day," Gitto explains. "You have to have good food — don't get me wrong — but you can't concentrate on only that. You have to have ambiance; you have to be out with the public so they know that Charlie Gitto is a real person. When I was younger I hit every table and introduced myself. I've met thousands of people over the years. It's that personal touch that makes us hold our own."

Though Charlie Gitto's is still a successful restaurant, the patriarch cannot help but feel nostalgic about what things were like when it opened its doors. As he likes to tell people, the restaurant was the only one of its kind in the area: "Hamburger places, a Chinese place, a Mexican place and a peep show across the street. That was it." Those times were better for business, he admits, lamenting what he sees is as a decline in people's willingness to come downtown unless they are heading to a certain entertainment megaplex next to the stadium.

Still, in 45 years he's seen the ebb and flow of business in the neighborhood and is optimistic that downtown can turn things around again. That hope is one of the things that keeps him going. The other? The personal connections and friendships he's made over the years in a life he lives without regret.

Gitto took a break from holding court over the restaurant to share his thoughts on the business, the importance of slowing down for a good meal, and why spaghetti is always the answer.

What is one thing people don’t know about you that you wish they did?
I couldn’t tell ya. People know everything about me. I’m a family man. I’ve been in the restaurant business my whole life.

What daily ritual is non-negotiable for you?
I wake up, take a shower, read the paper, get a cup of coffee and come to work. That’s what I do every day of my life.

If you could have any superpower, what would it be?
I would make downtown the way it used to be. This place used to be flooded with people. Conventions and Cardinals games are what keeps downtown business afloat.

What is the most positive thing in food, wine or cocktails that you’ve noticed in St. Louis over the past year?
There are so many new restaurants. Everyone wants to be in the business nowadays. Everyone thinks that it’s easy. It’s not easy. You need hard work, know-how and luck.

What is something missing in the local food, wine or cocktail scene that you’d like to see?
I miss how you used to come in for a big night with your family and enjoy yourself. Now everyone wants to be so fast paced. We have more business meetings here than families.

Who is your St. Louis food crush?
It was Vince Bommarito of Tony’s Restaurant. He was the guy that everyone looked up to in the business.

Which ingredient is most representative of your personality?
Easily, spaghetti sauce. It’s the most important.

If you weren’t working in the restaurant business, what would you be doing?
I’d be retired. Or I would have joined the workforce.

Name an ingredient never allowed in your restaurant.
What? Well, it can’t be garlic because I love garlic. I love all food.

What would be your last meal on earth?
A big plate of spaghetti and meatballs. I grew up loving spaghetti. My mom would make it every Wednesday and Sunday. Those were my favorite days.