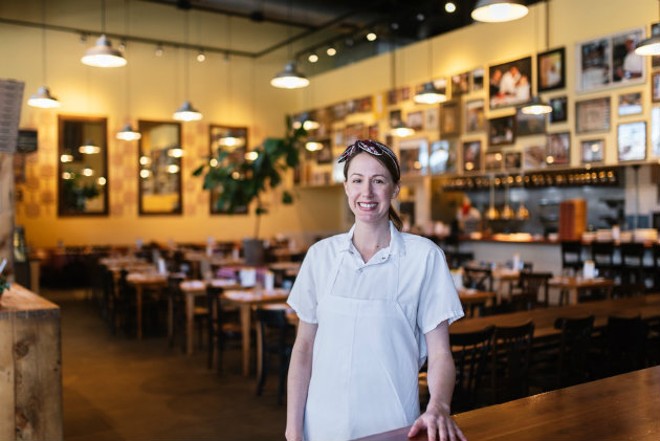 Growing up, Jai Kendall of Pastaria (7734 Forsyth Boulevard, Clayton; 314-862-6603) knew she was lucky. In her house, the entire family made it a priority to sit down to dinner together every night, a ritual that many of her friends did not have. She cherished that time and began to associate warm feelings with food at a young age. She also realized early on that she wanted to share those feelings with others by cooking.

"I would have sleepovers as a kid and get so excited to make my friends food," Kendall recalls. "I'd make them really pretty ice cream sundaes and just loved the presentation of it. One day, I remember going grocery shopping with my mom and seeing some Pillsbury biscuits. I told her, 'We could fry those up and make doughnuts!' My mom was like, 'How do you even know to do that?'"

Kendall's passion for cooking became more formalized during high school. After realizing that conventional educational settings were not for her, she enrolled in a wilderness school in Virginia where she took on the role as its cook. She was responsible for feeding everyone, and doing so with a rustic wood fire. She even had a budget to work with and was in charge of making sure the numbers worked out. The experience gave her a taste of what it would be like to cook professionally, and she loved it.

After high school, Kendall returned to St. Louis unsure of what her next move would be. A self-described free spirit, she figured it out by blindly running her finger over a map and landing on south Florida. Three days later, she packed her bags and set off for the Sunshine State with no job, no plans and $200 in her pocket.

"I just moved there on a whim," Kendall laughs. "Looking back, it was a little crazy, but it was the best decision I ever made."

Once she was in Florida, Kendall decided to pursue cooking as a career and scheduled a tour of Johnson & Wales' Miami campus. However, after the tour, she stopped into a tea room where she got to talking with the executive chef and owner. The woman learned of Kendall's culinary school aspirations and suggested a different path.

"She said, 'You know, you should get an apprenticeship and just start cooking,'" Kendall recalls. "I was never a school person anyway, so I took her advice."

Kendall got hired on with Rosa Mexicano and dove into kitchen work. At first, she focused on desserts, but eventually, she moved her way into savory and was promoted to the restaurant's corporate executive chef. After eight years, several of which involved training the chain's chefs all over the world, she decided she needed a change.

She moved to California to become a private chef. There, Kendall expanded her knowledge even further by learning about food from a healing perspective. And when her job took her to Costa Rica, where she was surrounded by an abundance of healing plants and nourishing food, she honed that aspect of her cooking, deriving a deep satisfaction from helping others through food.

She also fell in love. Kendall met her husband in Costa Rica, and the two married and had a son. Though they loved living there, Kendall felt the pull to return to St. Louis to raise their son surrounded by her family. In September, the three of them landed back in Missouri.

Kendall got a job with Peel Wood Fired Pizza, but it wasn't so long before Niche Food Group came knocking at her door. They needed someone to take over the role of Pastaria's executive chef and thought she would be a great fit.

"I remember I ate at Niche back around 2009 and completely falling in love with the food there," Kendall says. "I can still taste some of the dishes. Gerard [Craft] is one of the most innovative chefs and has a passion that is a rare find. He's always been someone I've looked up to, so I was excited about this opportunity to learn and grow."

Just a few weeks in to her new job, Kendall is taking things slowly, wanting to integrate with the team and get the flow of one of St. Louis' busiest kitchens before she starts adding creative touches. She insists that she is not changing things, but says you may seem some specials here and there that showcase her unique style.

"It's a new challenge," Kendall says. "'I've always loved Italian food and how it is about two art forms — the art of cooking and the art of eating. I've had the opportunity living in Miami and California to learn from chefs with Italian backgrounds, and I am excited to pick up and learn even more."

Kendall took a break from the kitchen to share her thoughts on the St. Louis food scene, her passion for nature and the dream meal that reminds her of her former home.

What is one thing people don’t know about you that you wish they did?
I’m a wilderness woman. I feel most at home when I’m out in nature, exploring the woods and camping.

What daily ritual is non-negotiable for you?
Juicing. I like to start my day off with making a cold-pressed green juice, as long as it includes lots of ginger and turmeric!

If you could have any superpower, what would it be?
To be able to fly. I grew up with birds — my father was a falconer — and I would daydream about being able to see the world from a bird's eye view.

What is the most positive thing in food, wine or cocktails that you’ve noticed in St. Louis over the past year?
Being new again in St. Louis, it’s so refreshing to see the support from fellow chefs. It’s a tight-knit community, and I’m honored to be a part of that.

What is something missing in the local food, wine or cocktail scene that you’d like to see?
Being more conscious about plastics, especially the use of plastic straws. I have seen first-hand the damaging effects on the environment, and there are so many alternatives.

Who is your St. Louis food crush?
Ny Vongsaly of Billie-Jean. I dream about his whole roasted snapper every single day.

Who’s the one person to watch right now in the St. Louis dining scene?
Brian Moxey of Sardella. His passion for food is inspiring, and the way he combines flavors is innovative and nostalgic at the same time.

Which ingredient is most representative of your personality?
Ginger! I admire the strong but nurturing nature of ginger, and the ability to add sweetness and spiciness to a dish.

If you weren’t working in the restaurant business, what would you be doing?
Most likely an interior designer or a musician.

What is your after-work hangout?
Since I work most evenings, it's on the couch, having a glass of wine with my husband, reminiscing about the day.

What’s your food or beverage guilty pleasure?
Ice cream, any and all flavors — I literally could eat it for breakfast, lunch and dinner.

What would be your last meal on earth?
Snapper ceviche with green fried plantains while drinking fresh coconut water!