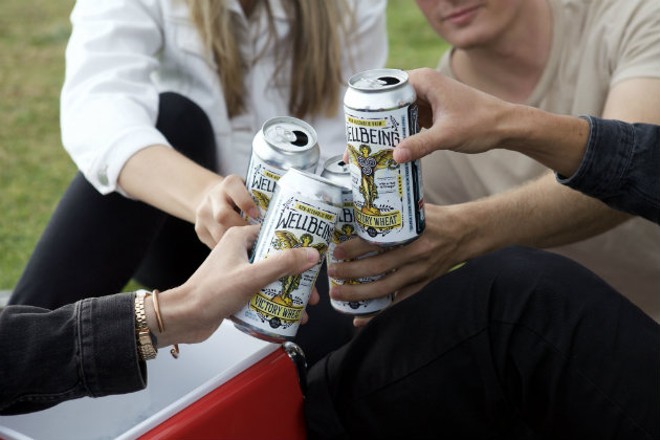 For a little over a year, WellBeing Brewing (wellbeingbrewing.com) has been at the forefront of a movement that has seen the beverage industry shift away from booze toward quality, non-alcoholic options. Now, the local NA craft beer company is shaking up the industry even further with its latest release — which it's dubbing the healthiest beer in the world.

The beer, Victory Wheat, is the first-ever non-alcoholic craft beer enhanced with electrolytes, the minerals that are essential to keeping the body hydrated. Described by WellBeing founder Jeff Stevens as an "adult sport drink," Victory Wheat makes its debut this week as the first craft beer to be marketed as a bona fide health beverage.

Stevens always had the idea of brewing healthy, functional beverages that use craft beer as a base — it's why he named the company WellBeing in the first place. However, he was inspired to take the leap into the health-beverage world after reading about how the German Olympic team trained with craft beer.

"We always knew that when you took the alcohol out of beer, it would be healthier," Stevens explains. "Then, an article came out about a German Olympic team that trained with craft beer. Beer naturally has antioxidants and is anti-inflammatory, but those can't come out because of the alcohol. Then I thought, 'Could we put electrolytes in it?' If so, it would be a sports drink."

Stevens got the extra push he needed after a serendipitous meeting with the local hydration-focused startup Buoy. Introduced to the founders through a mutual friend, he found himself impressed with Buoy's work using the World Health Organization's standards to develop a flavorless, electrolyte enhancement that could be added to water to boost hydration in developing countries.

In addition to its work in the developing world, Buoy was also looking to get into the beverage business, even working with bars to sell its products as a hangover antidote. Once Stevens heard of these plans, he was sure Buoy was the right partner to help him on his healthy beer mission.

"The thing about beer is that it is really hydrating once you take the alcohol to of it," Stevens explains. "In addition, NA beer has micronutrients in it called polyphenols that are anti-oxidants and anti-inflammatories. It helps the respiratory system and makes it so you don't swell. It's great for athletes in training or people working out — like an adult, good-tasting Gatorade."

Stevens doesn't view the Victory Wheat as merely a sports drink, though. The golden wheat beer, brewed with a hint of blood orange, is delicious in its own right, he says. Plus, he notes, there are many reasons you might want its refreshing powers that have nothing to do with the gym.

"This is the perfect beer to have after mowing the lawn on a hot summer day because it's super hydrating and refreshing," Stevens says. "Also, we like to think of this as your 'last call' beer; it gets you super hydrated before you go to bed so you don't wake up with a hangover."

And there is one additional category of drinkers that he thinks will benefit from Victory Wheat.

"Stoners," Stevens laughs. "You're really thirsty, but mixing that with alcohol isn't great."

Stevens is optimistic about Victory Wheat's success and has already shipped off the first pallets around town and to a few cities out of state. He expects that the new beer will be available in the area liquor stores and retailers that carry WellBeing by next week.

"The nice thing about craft beer is the we can tweak things a little here and there," Stevens says. "But I think this is delicious."