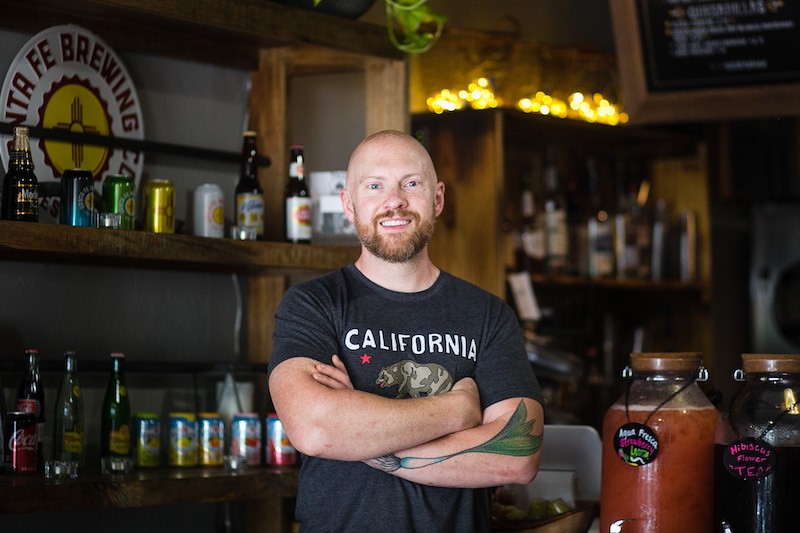 Jeff Friesen found inspiration for his career path from his physician father. However, it had nothing to do with medicine.

"My dad was a physician, but he loved to cook," Friesen recalls. "My mom cooked most of the time, but he always made time once or twice a week to cook at home. I remember watching The Frugal Gourmet with him and learned how to do pasta and risotto from and with him."

Friesen, now executive chef and general manager at Taco Buddha (7405 Pershing Avenue, University City; 314-502-9951), felt an undeniable passion for cooking from an early age, but he did not entertain it as a career path. Instead, he decided to follow in his father's footsteps, heading off to Truman State University for pre-med. There, he earned a degree in biology with plans to attend medical school, but something told him it wasn't the right fit.

Friesen knew that he needed to find a new path, but he wasn't sure what it would be. He worked for his father for a time, gave teaching a try and even briefly pursued an MBA. All the while, he continued to question what his long-term plan would look like. Then, his cousin gave him an idea.

"My cousin had been talking about going to culinary school in Italy, and I was like, 'You can do that?'" Friesen says. "It woke me up."

Friesen looked at overseas culinary programs but decided to stay in the U.S. for financial reasons, opting to attend the Institute of Culinary Education in New York. The program was accelerated and hands-on, and he found himself immersed in a professional kitchen from the get-go. He was hooked.

After beginning his career in New York City, Friesen felt the pull to come back to St. Louis both for financial reasons and to be close to family. Once home, he began working with John Perkins, then an up-and-coming chef who was doing a series of underground dinners, as well as Josh Galliano at Monarch. Through Galliano, he met Kevin Willmann, who was just getting ready to open Farmhaus, and got hired on, rising to the role of sous chef over his five-year tenure at the restaurant.

"Kevin is a really good cook, and he knows how to make things taste really good," Friesen says. "My learning curve was steep, but I had a lot of creative freedom there. I got to explore and make mistakes, but learn from them."

After Farmhaus, Friesen briefly worked for Sugarfire Smoke House, but felt drawn back to fine dining. He ended up reconnecting with his old boss, Perkins, at Juniper. Friesen worked there for two years. It was a gig he loved, and he threw himself completely into it, even helping Perkins plan the restaurant's big move to a new location. However, while they prepared for the move, he began to get that unsetting feeling he felt back in college — that something wasn't quite right with the direction he was headed.

"I began to start questioning whether or not I wanted to be a chef," Friesen explains. "I was working long hours and weekends and didn't get to see my family or friends. I was having all of these questions, and the move was such a big deal for John [Perkins] and the restaurant that I didn't want to go into it being so unsure. It didn't seem fair to them if my heart wasn't in it."

Friesen left Juniper and spent the next year taking gig work. He taught cooking classes to kids and adults and even thought about pursuing that full time. However, a chance meeting with the owner of Taco Buddha, Kurt Eller, would put everything in perspective for him.

"We got to talking, then met up a few weeks later and just hit it off," Friesen explains. "He's a great business mind and really wants to take care of people. He loves making people feel happy and at home. His hospitality really resonates with me."

At first, Eller thought Friesen would simply help out here and there with special events and dinners. However, after a fire shuttered Eller's restaurant in January, Eller had time to reevaluate the concept — and he wanted Friesen to be a part of its new incarnation.

Friesen joined Taco Buddha as executive chef and general manager earlier this spring and helped Eller get the place ready to reopen on April 25. It's been nonstop ever since, as throngs of loyal customers have packed the place, eager to get a taste of what they missed during the four months the restaurant was closed.

Though he's barely had time to look up since the reopening, Friesen is thrilled with his life at Taco Buddha. As he beefs up his kitchen crew, he will step out more into the front of house, serving as a hybrid executive chef and general manager, though he admits he's not keen on titles. He simply wants to take care of people, interact with his guests and have the work-life balance that he's realized is his priority.

"At this point in my career, I'm just looking to be a part of a successful restaurant that makes people happy and that I can make a decent living at and have time with friends and family," Friesen says. "That's what I want."

Friesen took a break from making his wildly popular burnt ends tacos to share his thoughts on the St. Louis food and beverage scene, his daily ritual and the chefs he most admires.

What is one thing people don’t know about you that you wish they did?
My tattoo is not of a leek or a green onion, etc. It is a ramp, and it’s totally my favorite.

What daily ritual is non-negotiable for you?
Drinking coffee in bed while watching The Daily Show from the night before.

If you could have any superpower, what would it be?
Total control of time.

What is the most positive thing in food, wine or cocktails that you’ve noticed in St. Louis over the past year?
Have you heard that Taco Buddha reopened?

What is something missing in the local food, wine or cocktail scene that you’d like to see?
An abundance of hungry, hardworking cooks.

Who is your St. Louis food crush?
I have two. The first is Nick Bognar of Nippon Tei, and I haven’t even eaten his food yet. Also, Rob Connoley. I just ate at Bulrush, and it was fantastic.

Who’s the one person to watch right now in the St. Louis dining scene?
I just wanna know what Chris Bork is gonna do next. Vista Ramen was crazy tasty.

Which ingredient is most representative of your personality?
Science.

If you weren’t working in the restaurant business, what would you be doing?
I’d be a teacher or physician.

Name an ingredient never allowed in your restaurant.
Closed-mindedness.

What is your after-work hangout?
Home or anywhere with people I love.

What would be your last meal on earth?
Cheeseburgers. And fried chicken. And Union Loafers pizza. Tacos and margaritas. And then ice cream until I die.