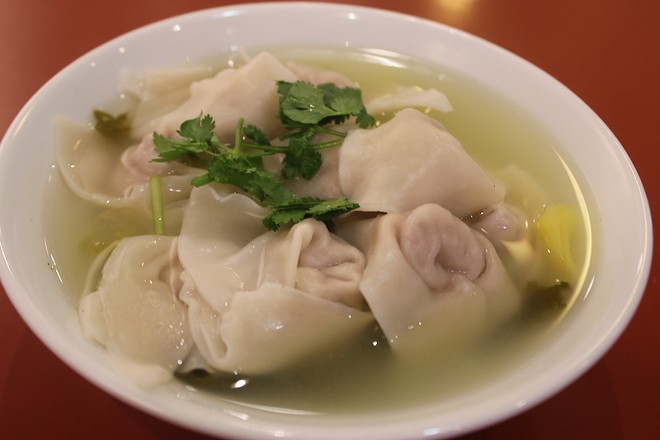 In either event, there is absolutely no reason to be alarmed. The potatoes prove to be merely crinkle-cut French fries, albeit a version topped with dried chiles. And that scary-sounding fungus? It's just a delicious appetizer-sized plate of wood ear mushrooms, sauteed in oil until they're perfectly tender. You won't be able to stop eating.

Shiquan Wonton is the second outpost of a Champaign, Illinois, eatery, that opened last year. The original has developed a following for its authentic Chinese cuisine, much of it coming from the southern parts of the country: wontons floating in Sichuan's beloved Mala sauce (here called "spicy and mouth-numbing soup"), Shanghai-style fried shrimp and Mapo tofu.

The menu at the Loop location is almost exactly the same, with the eponymous wontons offered in two main categories: in soup, or with sauce. Just $7.95 will get you a heaping bowl of one of the two. Note that the soup descriptions are for the broth, not the filling; we ordered the "Chinese sour pickle" and were delighted to find pickled root vegetables and seawood bobbing in a liquid that slowly turned pale green and emitted a lightly vinegary smell. The wontons themselves were stuffed with ground pork.

The owners say they opened the Loop outpost just a few days ago and are hoping for a bit of a soft opening while they get their sea legs. They took over the space that used to house Chinese Noodle Cafe (owner Peggy Hou retired after they reached out with an unsolicited offer) and while they've added new hardwood floors and a coat of paint, they're eyeing more changes, including taking out the counter that breaks up the room to allow more tables and chairs. Their space in Champaign is a bit prettier, they say, and they see themselves moving in that direction.

Even before that, though, you can stop by and get a bite. One of the owners will take your order at your table, though you'll be asked to pay at the counter when you're ready to leave. Their English is limited, so they'll offer an iPad with photos so you can make sure you're ordering what you really want.

What do you really want? Some wontons, certainly. And if "spicy and mouth numbing" is your thing, they'll happily serve you that. If not, may we recommend the Chinese sour pickle?