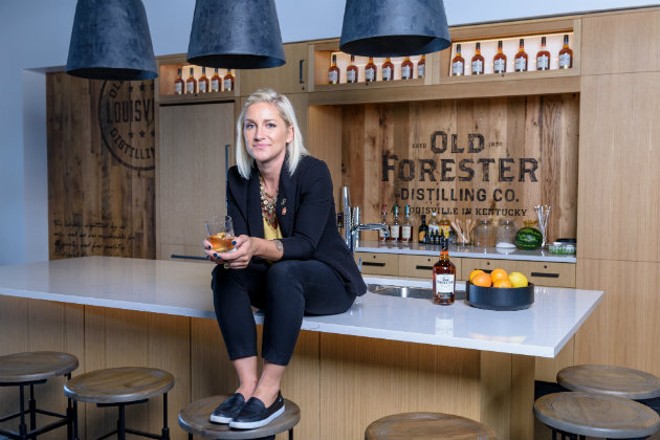 For Jackie Zykan, "medical school" seemed like the right response whenever someone asked what she wanted to do with her life. Granted, she was just in high school, but she had always excelled at chemistry and biology and was fascinated with how the human body worked. However natural the fit may have seemed, though, it didn't take long to realize it wasn't her path.

"In high school you're still a baby and being asked to make these life decisions," Zykan says. "You make decisions based on what you think you should do — not just what you impose on yourself, but what others impose on you. But as I got into the alcohol industry space, and saw how professional it could be, I realized that it's OK to be passionate about this. I'm not doing anything wrong."

A St. Louis transplant now living in Louisville, Zykan has found her way to the upper echelon of the bourbon business as "master taster" for Old Forester bourbon. Praised for her "off the charts palate," in the words of the ABV Network, she's the brand's quality control, charged with making sure the bourbon meets its high standards by sampling the product and developing its tasting notes.

She got her start in the business about thirteen years ago in her hometown, beginning as a server and working her way up to bartender. She fell in love with all aspects of bartending from the get-go, but she didn't consider it a career path.

Those feelings changed when she moved to Louisville after her husband was offered a job there. Questioning what she wanted to do with her life, she again found herself behind the bar — and this time around, the answer was becoming clear.

"It used to be that I would run into someone I went to high school with when I was bartending, and they would tell me how they were an accountant at some firm. I felt shamed for that," Zykan explains. "Once I came here, I was completely unapologetic about what I was doing. I'm able to do what I love and not feel ashamed for it. Once I hit that flow, I never looked back."

Within two weeks of being hired as a bartender in Louisville, she was promoted to bar manager. Not long after that, her employer opened a second location and promoted her to beverage director. Since many of the top bourbon brands are located in the area, the job allowed her to get to know many prominent players. At first, her relationship with the brands consisted of them doing events at her bars. Eventually, some began asking her to create signature cocktails; the next thing she knew, she was being called upon to do spots on television to promote the cocktails she created.

Zykan began to make a name for herself in the business and found herself being pulled into the branding side of the business. However, she wasn't going to make the leap for just any bourbon — she had her eye on one in particular.

"The one brand I always felt that I was holding out for is Old Forester," Zykan says. "It's historic, and iconic, and the Louisville hometown bourbon. It's what bourbon is supposed to be. If you have an offer to work for a brand like this, you don't say no.

Zykan was hired by Old Forester to be its master taster, a dream gig that she describes as a hybrid between marketing and production. When the company creates a new product, she's the one who makes sure it's up to snuff. She also leads the cocktail and marketing strategy as well as the company's bourbon education program — the part of the job that appeals most to her.

"There are a lot of people out there who don't drink bourbon — even in Kentucky," Zykan says. "If I can make you a cocktail and turn you into a bourbon drinker, that's exciting. When you have the opportunity to explain to someone the different aromatics and flavors, it resonates and can be very emotional and trigger something. You see it on their face at that moment. That a glass of whiskey inspired something that is near and dear to the heart is powerful."

Zykan frequently travels back to St. Louis, where she never misses a chance to check out what's happening in the local beverage scene and crush some St. Louis-style pizza. She took a break from her master taster duties to share her thoughts on pre-bottled sour mix, the importance of breakfast, and the things she misses about her hometown — especially the Missouri Baking Company.

What is one thing people don’t know about you that you wish they did?
I’m honest to a fault. I think it comes across sometimes as harsh or insensitive. I assure you, I’m just really direct and short on time. Bullshit has no place here.

What daily ritual is non-negotiable for you?
Breakfast. I am worthless without it. And not, like, a donut. BREAKFAST-BREAKFAST.

If you could have any superpower, what would it be?
Well, since I recently lost the power of invisibility, I’ll go with telekinesis.

What is the most positive trend in food, beer, wine or cocktails that you’ve noticed in beverage business over the past year?
Honestly, it’s an overarching sense of camaraderie in the industry as a whole. Trade-focused groups are growing and the community in general is becoming more close knit and supportive of each other.

What is one thing missing or that you’d like to see in the local food and beverage scene?
St. Louis is so diehard about its namesake offerings; I would love to see us invent/exclusively offer one that perhaps comes with a little less guilt upon consumption.

Who is your St. Louis food or drink crush?
Every single person that works at the Missouri Baking Company.

Who’s the one person to watch right now in the St. Louis food and beverage scene?
Tim Wiggins of Retreat Gastropub and Yellowbelly is, hands down, one of my favorite people and has nowhere to go but up. It's very exciting to see where his journey takes him.

Which ingredient is most representative of your personality?
Bourbon. It possesses an undeniably old soul and is exceptionally versatile. Might take a minute to get used to it sometimes, but the attempt is almost guaranteed to pay off. It’s also one of those situations where your mom warned you if you consume too much of something you turn into it ... just saying.

If someone asked you to describe the current state of St. Louis’ food and beverage climate, what would you say?
I think the independent concepts are still struggling under the pressure of chains, whether it be small regionals or massive national/global players. The best thing one can do to preserve the culture of St. Louis or anywhere really is to support the local businesses.

If you were not the master taster, what would you be doing?
I would be running a flower shop and perfumery.

What do you do in your off time?
It’s sparse at best anymore, but when it’s there I disappear into the woods with zero cell service and no alcohol. I actually prefer to come back to Missouri for the Ozark riverways. It’s really the only place where my mind has to submit and accept that it can’t discern the boundary where the air around me stops and my skin begins.

What’s your guilty pleasure?
Gummy bears. It’s sick, I know. I’m an adult. And I will annihilate an entire bag in minutes.

What would be your last meal on earth?
My better half’s osso bucco. A 2009 Châteauneuf-du-Pape. Tiramisu from Lotsa Pasta in Louisville.