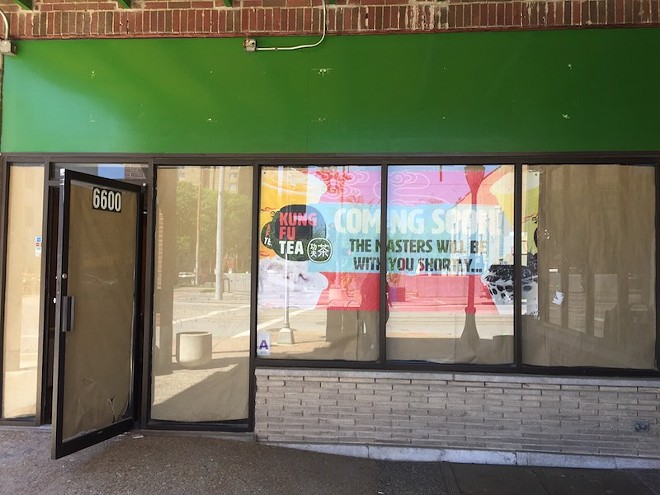 New life is coming to a long-vacant space on Delmar. A Kung Fu Tea franchise originally slated to open on the far western end of the Loop has instead begun construction at 6600 Delmar.

"Coming soon," its sign reads. "The masters will be with you shortly."

That space was most recently home to 8 Dollar Deli, a sandwich concept that lasted less than two months before its owner unceremoniously announced he was closing and had his eye on O'Fallon. Other than that incredibly brief run in the fall of 2016, it's been empty since Smoothie King closed its doors in January 2016.

Kung Fu Tea will be the first Missouri outpost of a New York City company that offers "Oriental-style brew tea, bubble tea, coffee, juices and other hot and cold drinks," according to its original application with University City. At the time it made its application, it was planning to move into the Game Stop spot at 6662 Delmar Boulevard. But it never moved in, and in the two years that have passed since then, the western end of the Loop has seen even more closures as the street's virtual center point has shifted further east toward the Pageant.

The tea shop will see competition. In addition to Corner 17 and St. Louis Bubble Tea, both longstanding Loop businesses, the brand-new Tasti-Tea now offers bubble tea and other creative Chinese-style drinks, including the suddenly ubiquitous "cheese tea" making a major wave in University City this year.

Still, it may find there are enough customers to go around. The Loop has become a destination for savvy young Asian customers (or those who just love Asian foods). In the last few years, it's seen businesses like Chipotle and the mac-and-cheese shop Cheeseology replaced with places serving authentic Sichuan dishes and Thai-style ice cream rolls, even as W Karaoke now provides a high-end karaoke experience in what used to be a sports bar. Kung Fu Tea may fit right in.

We welcome tips and feedback. Email the author sarah.fenske@riverfronttimes.com