A Craft Beer Pioneer, Fran Caradonna Is Tackling a New Role at Schlafly 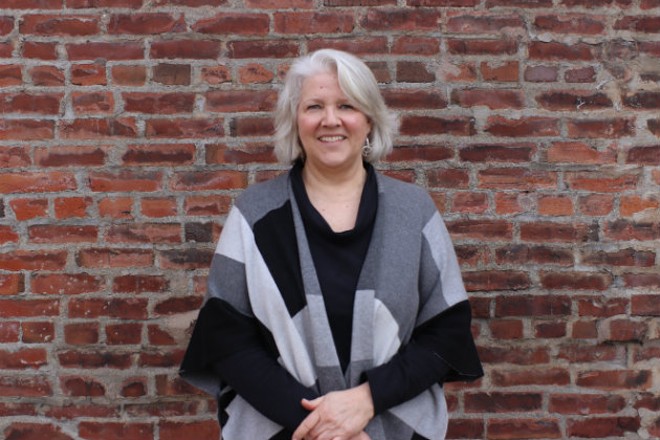 Fran Caradonna gets a bit embarrassed when she talks about her beer-drinking past.

"Don't tell anyone, but I was a Natty Light girl back in college at the University of South Carolina," Caradonna laughs. "It was the '70s. I was a frustrated hippie. I drank it because it was 'natural.'"

As one of the most influential pioneers of St. Louis' craft beer scene, Caradonna drinking cheap domestic lagers seems downright comical. The co-founder of the groundbreaking distributorship Signature Beer Company, as well as the respected O'Fallon Brewery, Caradonna has made craft beer her life's work. And in her new role as the CFO and CAO of the Saint Louis Brewery, which brews under the Schlafly label, she's continuing that mission. These days, she's focused on the continued success of Schlafly beers, which make the cheap stuff of her youth look like swill.

As she explains it, she didn't begin drinking American-style lagers because she was enthused about them; she simply had little choice. In her college drinking days, that's what dominated the industry, leaving U.S. drinkers with virtually no options beyond brews produced by large, corporate breweries.

However, Caradonna sought out different options any chance she could, drinking imports like Beck's Dark, St. Pauli Girl or draught Heineken because she enjoyed their fuller flavor. As soon as West Coast "micro-brews" began to hit the market in the 1980s, Caradonna embraced them with gusto.

"It was a challenge to drink good beer back then," Caradonna explains. "But then I discovered beers like Full Sail Ale, and it was so good because it had so much flavor. It's not that we didn't like to drink domestic lager, but the micro-breweries made beer that was so much more fresh and flavorful."

Caradonna and her then-husband, Tony, decided to do something to make these beers more readily available in St. Louis. In 1990, they launched the Signature Brands distributorship, with the express purpose of bringing craft beer to town.

It was a tough sell getting people to change their perceptions about what beer should be — and St. Louis provided special challenges.

"This town was so loyal to [Anheuser-Busch] because it had employed their grandparents and parents and had stayed open during Prohibition so people wouldn't lose their jobs," Caradonna explains. "There was a deep civic loyalty — and they earned that and deserved it. We had to explain to people when they asked if the craft beer tasted like Budweiser, 'No, not really.'"

Signature Brands started out right around the time Schlafly came on the scene. Naturally, when Schlafly decided to sell in grocery and liquor stores, Signature Brands became its distributor.

And Signature's success only grew, bolstered by bringing such brands to St. Louis as Pete's Wicked Ale. In fact, the Caradonnas became so successful that their company became attractive to larger distributorships. They eventually sold to Major Brands after getting an offer they couldn't refuse.

The buyout was exactly the push the Caradonnas needed to pursue their dream of owning their own brewery. In 2000, they opened O'Fallon Brewery, learning as they went and relying on their peers at the city's other local breweries to guide them along the way.

After selling O'Fallon to former Anheuser-Busch executive Jim Gorczyca in 2011, Fran Cardaonna continued to work for the brewery as its general manager. However, when she was approached earlier this year by the Saint Louis Brewery, she jumped at the chance to again work with the company that had played such a crucial role in her ascent in the city's beer scene.

"I'm just really happy to be here," Caradonna says. "It's so different than it was back in the day — now there are two production facilities and two restaurants. Still, it feels like coming home."

And it's not just Schlafly that has changed over the past two decades; the city's craft beer scene has exploded in ways Caradonna could never have imagined back when she was talking people into giving craft beer a try — and she couldn't be more thrilled.

Caradonna took a break from her new Schlafly duties to share her thoughts on the St. Louis food and beverage community, her passion for the Gulf of Mexico, and why she will forever be bullish on the city's craft beer scene.

What is one thing people don’t know about you that you wish they did?
When it’s not in St. Louis, my heart lives on the Forgotten Coast … a narrow strip of north Florida coastline stretching from the St. Marks River to Mexico Beach.

What daily ritual is non-negotiable for you?
My morning yoga stretch, followed by a walk in my U. City neighborhood with my three-year old Carolina dog, Benji.

If you could have any superpower, what would it be?
To drink all the great beer that I desire and never gain an inch or a pound (like my St. Louis Printer baseball-playing son Lew Caradonna).

What is the most positive trend in food, beer, wine or cocktails that you’ve noticed in St. Louis over the past year?
It’s a 25-plus year trend, but we continue to have the widest selection of the best local beers brewed by the most creative brewers in the Midwest, and arguably the country.

What is one thing missing or that you’d like to see in the St. Louis food and beverage scene?
More fresh seafood from the Gulf of Mexico. Sigh. Not very realistic given our location.

Who is your St. Louis food or drink crush?
Schlafly founding brewer Stephen Hale, of course. I’ve known him long enough to remember when he wore pants! (For those who don’t know Stephen Hale, he’s frequently recognized for his utilikilt.)

Who’s the one person to watch right now in the St. Louis food and beverage scene?
Joe Caradonna, an ambitious young server at Kingside Diner in the Central West End with hopes to move up in the biz. (Yes, his mom is proud.)

Which ingredient is most representative of your personality?
Raspberry – sweet and tart and just a little seedy – featured in our Raspberry Hefeweizen.

If someone asked you to describe the current state of St. Louis’ food and beverage climate, what would you say?
Interesting, dynamic and fun … much more so than when I arrived 35 years ago.

Name an ingredient never allowed in your brewery.
We’re open to working with anything when it comes to ingredients. With that said, we have to be comfortable admitting when something just doesn’t work out in a beer. It has to be delicious and something that our brewers are proud of to put in front of our guests.

What would be your last meal on earth?
Roasted shrimp served with fresh summer squash, tomatoes and basil.