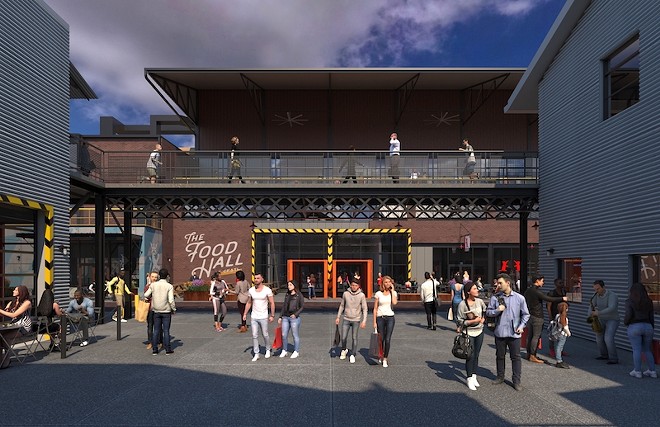 It's full steam ahead for City Foundry (214 South Vandeventer), the massive mixed-used project under construction at the former Century Electric Foundry site in Midtown. The project this morning released new renderings that show how it should look when it opens next spring — as well as the names of new vendors and tenants planning to locate on site.

The most interesting to the general public will likely be the new vendors who've signed on to City Foundry's food hall, which is now at 80 percent capacity.

In addition to the rising star chefs and restaurateurs announced in January, the fifteen-acre development will be joined by Buenos Aires Cafe (from the owners of La Gaucha in O'Fallon, Illinois), Chela Tapas (from chef Grace Dinsmoor), City Taco Shack (from Sue Wong-Shackelford of Kalbi Taco Shack), Murf's Deli (by chef Maher David) and Natalie's Cakes and More (from Natalie Dubose, best known for her Ferguson bakery of the same name).

Great Rivers Greenway joins office tenants Orion Genomics and Gateway Blend in getting to taste all that deliciousness; the regional public agency will be moving its office on site, the developers announced this morning.

And it's not just the Food Hall; anchor tenants were previously announced as Punch Bowl Social and Alamo Drafthouse. Today the developers also announced a 700-person event space on site: 18Rails, to be run by Butler's Pantry.

Check out a few additional renderings below: