Fried Is Now Open Downtown, With a Cannabis Theme and CBD on the Menu 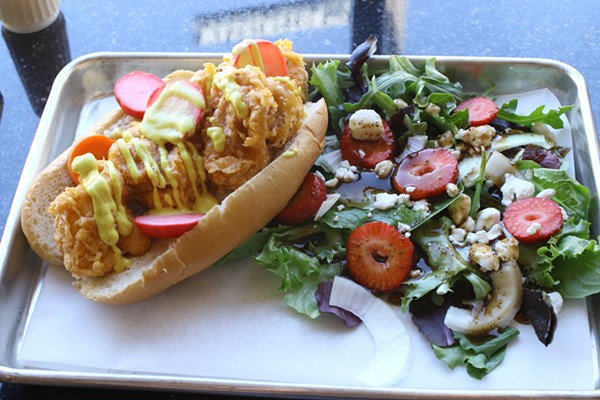 Get ready to get Fried. Fried (1330 Washington Avenue) is a cannabis-themed restaurant that serves both fried food and CBD-infused sauces. Located in the shadow of the City Museum, the counter-service spot is celebrating its grand opening today from 11 a.m to 1 a.m., or until it sells out.

Fried is the newest eatery from restaurateur/chef Derek Schulze, and his second to opening on Wash Ave. Fried is in the former home of Red Oak Eats 'n Treats, which changed its name and concept to Red Oak Biscuits and moved to Cherokee Street last November. Schulze also plans to open another spot on Wash Ave called Beef Bar (date TBD).

Schulze parents live on a farm in Warrenton, Missouri, which is the source of some of his fresh ingredients. After moving to Chicago, California and then back to Chicago, Schulze explained in a 2017 RFT interview that his parents had to talk him into giving St. Louis a shot and opening a restaurant here. Now he's doubling down on the city — and plans to triple down in the coming months.

At Fried, customers can purchase ten-ounce bottled "Strains," which are the restaurant's sauces. They come with or without CBD infusion (they are priced at $12.95 with CBD and $8.95 without). Choose among flavors named after strains of weed including Hindu Kush, Fire OG, Strawberry Cough and more. But if you came to the grand opening for a dose of CBD, prepare to be disappointed; that component isn't available until next week.

Still, there's plenty to eat, none of it over $10. Nuggets play a starring role; choose between chicken, cauliflower, catfish or vegan chicken versions, each available in small, medium or large sizes ($3, $4.50 or $6.95, respectively), with your choice of strain on top. Add on fries or mac and cheese for an additional $2.

"Pre-Rolls" are the nuggets in sandwich form. That includes "the Nugwich," which features buffalo chicken or vegan chicken slathered with Fire OG sauce, drizzled with White Widow ranch and topped with Red Hot Riplets. Or try the "Hindu Kush Pre Roll," which features cauliflower nugs in Tika Masala sauce, topped with daikon and pickled carrots.

For dessert, choose from fried deserts, including deep-fried Oreos and a deep- fried gooey butter cake.

On the Fried website, Schulze explains that the cannabis theme celebrates changing times.

"It is on the nose, it is right in peoples faces and given the climate around getting fried in the US, this food celebrates the years old prohibition coming to an end," the site explains. "Just as speakeasies days were over, and drinking became a celebrated part of American culture, Fried. aims to celebrate a new culture."

Scroll down for more photos of Fried. 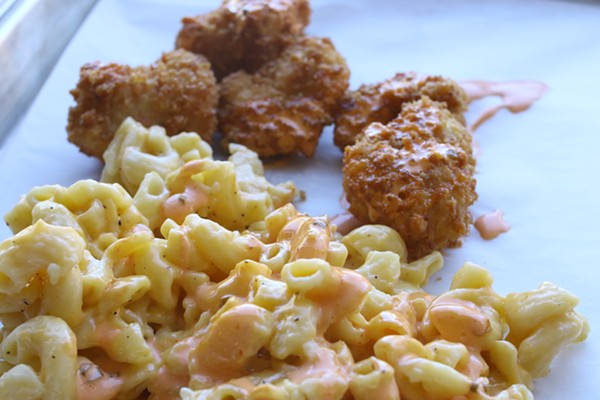