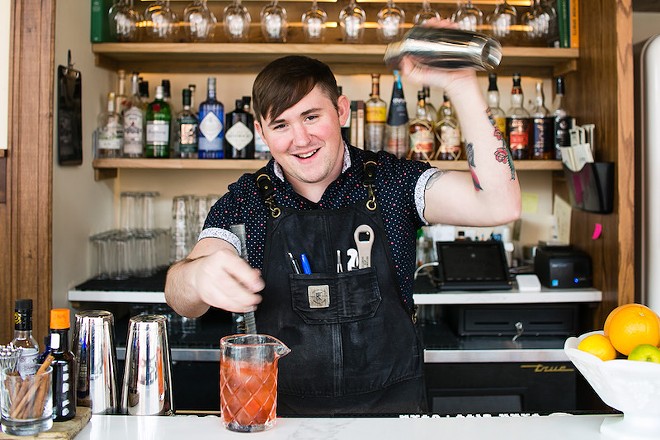 Brendan Sante was three years into nursing school when he had an existential crisis. He'd been priming himself for the profession his entire life, hoping to combine his passion for humanitarian work with his love of seeing new places as a traveling nurse. To the outside observer, he was well on his way. But he'd decided nursing was no longer what he wanted to do.

"I realized it wasn't for me when I started doing clinical rotations," Sante explains. "When I interacted with the nurses who'd been doing it for five years or less, they were still cheerful. However, the ones who had been doing it longer had lost the light in their eyes. It's a difficult job, emotionally and physically. I knew myself well enough to know that I was not going to be happy doing this. I had to pull the plug, or I was going to hate myself in five years."

Sante's pivot from the world of health care to bar manager at Juniper (4101 Laclede Avenue, 314-329-7696) might look like it came out of left field, but it was the realization of a life path he'd often pictured for himself. As a kid, he gravitated toward the kitchen, and his mom encouraged him to make messes and play around with food. However, her encouragement waned when he began expressing interest in cooking professionally.

"As I kid, I always thought I wanted to be a chef, but my mom told me that I didn't want to do that," Sante recalls. "She told me that chefs work long hours and don't get paid well, so I said, 'OK,' and decided not to do it."

When nursing school didn't work out, Sante bucked his mom's advice (she's since apologized). As he got his feet wet in the industry, he found himself particularly intrigued by the bar side of the business, an interest he traces back to being stuck indoors with the flu as a fourth grader, watching "Distillation Week" on the History Channel. The bar environment reawakened that passion within him and before he knew it, he was learning everything he could about the craft.

Sante worked at Baileys' Chocolate Bar for three and a half years, reveling in the opportunity to learn all he could about cocktails both behind the bar and in his own research. However, when friends asked him to join them as a bartender at Mangia, he decided to change course.

The 3 a.m. bar not only spoke to his night-owl tendencies but also afforded him the opportunity to get paid to serve his friends drinks. Over time, however, Mangia's shots-and-beer vibe made him feel creatively stifled. He reached out to his mentor from the chocolate bar, Gene Bailey, for advice. Instead, he got a job offer.

"I called to ask him if I could use him as a reference, and he said to me, 'Actually, I might have something for you,'" Sante recalls. "I staged with him at Juniper in December, and I never left."

As bar manager at the Southern-inflected Central West End restaurant, Sante finds himself inspired by as much by proprietor John Perkins' thoughtful cuisine as his work ethic and passion for hospitality. To him, that's the best part of the business — and one that is not all that removed from what drew him to nursing.

"During rotations, seeing people who were appreciative of what you are doing really makes your day," Sante says. "Being at a place like Juniper, when I'm able to show someone a good time and take care of them does the same thing."

Sante took a break from the bar to share his thoughts on the St. Louis food and beverage scene, his quest for late-night food and the unlikely person who most inspires him when it comes to hospitality.

What is one thing people don’t know about you that you wish they did?
When I’m able to find the time, I’m out riding or wrenching on old mopeds with my best friends.

What daily ritual is non-negotiable for you?
Like most folks, coffee and spending quality time with my dog.

If you could have any superpower, what would it be?
If I never needed sleep, I would be a much more productive person. The next day’s tasks are always on my mind to a fault. Beyond my professional and social life, I’d like to get more reading done. Teleportation would be cool too.

What is the most positive trend in food, beer, wine or cocktails that you’ve noticed in St. Louis over the past year?
Tiki cocktails and vegetable-forward/hyper-local cuisine. Tim Wiggins at Yellowbelly/Retreat (among others, of course) has certainly made strides to bring a reputation to the St. Louis cocktail scene and demonstrate that we’re something to keep an eye on nationwide. In addition, the work he puts forth testifies that drinks in general can be whimsical while being truly original and elaborate. Dining at Vicia and Savage has shown me, as an avid carnivore, that veggies can in fact steal the spotlight in the best meal you've ever had.

What is one thing missing or that you’d like to see in the local food and beverage scene?
Decent food worth your time and money after 2 a.m. As a fervent night owl, the lack of worthwhile 24-hour/late-night food establishments beyond the go-to diner can leave a lot to be desired.

Who is your St. Louis food or drink crush?
There’s too many to name. But if I had to pick two, Tony Saputo at the Midwestern and Raquella at Courtesy Diner on Kingshighway. As a college student years ago, I would slip over to Layla between or during classes for a quick bite and a drink or two. Tony never had anything but an amazing attitude towards guests and would answer any questions I had when I came to talk shop. Regarding Raquella, I have never seen such work ethic and positivity in an individual, period. She never bats an eye at a difficult order or a packed house. If I think I'm having a hard time at work, my experience pales in comparison to the tribulations I've seen her conquer.

Who’s the one person to watch right now in the St. Louis food and beverage scene?
Natasha Bahrami of the Gin Room or Vic Gainor at Vicia. Natasha has done more than anyone I know to demonstrate that the St. Louis drink scene is more than worth its salt with the Gin World events she coordinates. Vic makes custom-ordered cocktails seem effortless. You can give him a one word descriptor and he'll make you the drink you've been searching for all your life.

Which ingredient is most representative of your personality?
Green chile. Sometimes spicy, sometimes sweet. If I can find an excuse to use it behind the bar I run with it.

If someone asked you to describe the current state of St. Louis’ food and beverage climate, what would you say?
I would say the restaurant and bar scene in St. Louis is still emerging. That falls on the venue as much as the guest. I hope to see more risks being taken and unusual or intimidating ingredients being used and enjoyed. While our city has made leaps and bounds in the world of food and drink, we have yet to reach the ceiling.

If you were not tending bar, what would you be doing?
I would be dead in a ditch. Since coming into the hospitality industry, I've never looked back and I've never felt more at home.

Name an ingredient never allowed behind your bar.
Rose's Lime. That stuff is foul.

What is your after-work hangout?
CBGB on South Grand for a few rounds with some really good friends and even better bartenders. That, or Parlor with some very close coworkers and a few games of Skee-Ball.

What’s your edible or quaffable guilty pleasure?
I don’t typically go for sweets, but I’ll devour Almond Crush Pocky. We keep multiple packs stocked in the kitchen for the whole crew to snack on during breaks.

What would be your last meal on earth?
I grew up hunting and fishing with my dad and cooking with my mom. My mom learned to make Indian food with some family friends after we adopted my sister, and her tikka masala is indiscernible from the otherwise real deal. I’ve always been a sucker for anything with curry spices. My dad taught me how to grill, and his grilled pheasant with roasted vegetables brings back homey nostalgia. To finish, my grandmother’s strawberry-rhubarb cobbler; it's so good. All of that with plenty of dry Provençal rosé and my favorite gin to finish it off.